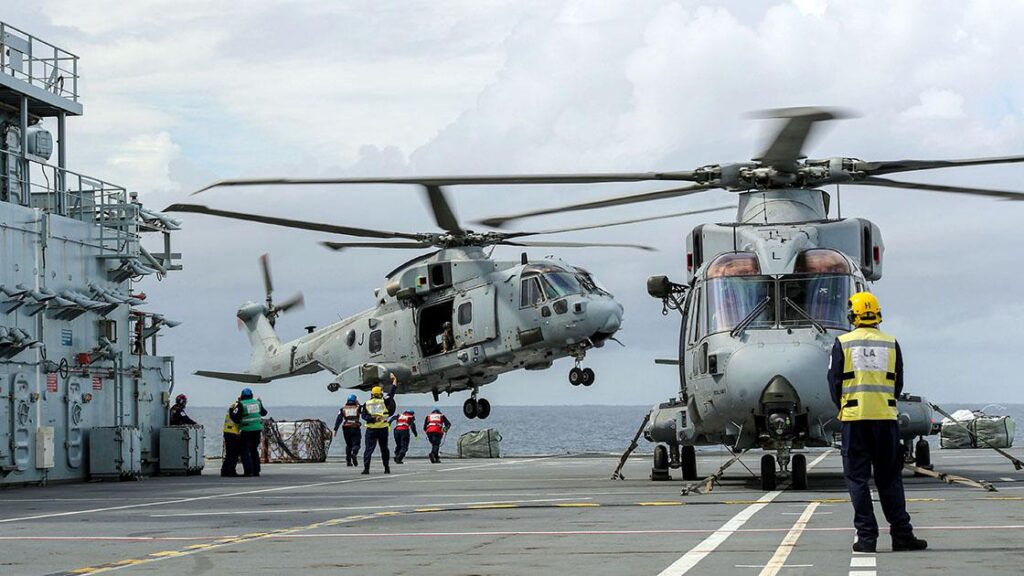 The UK Ministry of Defence, on behalf of the Royal Navy, received its final AW101 Mk4/4a Merlin helicopter. This aircraft was part of the Merlin Life Sustainment Program, which entailed the upgrade of 25 AW101 Merlin Mk3/3a aircraft.

The aircraft modifications include new cockpit avionics, ship optimization including a folding main rotor head and folding tail to enable the helicopters use from ships for littoral manoeuvre.

The Merlin aircraft were transferred to the Royal Navy in 2014, to replace the legacy Sea King Mk 4 Commando helicopter, and the airframes commenced an upgrade program to become the Merlin Mk 4.

Leonardo explains, within their new role with the Royal Navy’s Commando Helicopter Force (CHF), the aircraft are now required to operate from amphibious ships and provide a sea to shore assault capability, often in support of troops from the Royal Marines.

The AW101 Mk4/4a Merlin designs allow the aircraft to operate from the new Queen Elizabeth Class carriers and Albion Class Landing Ships. The aircraft also include the integration of a new tactical processor that provides tailored information to the aircrew to better understand the tactical environment and enemy threats that they find on the battlefield.
Drawing from the technologies developed for the AW159 Wildcat aircraft, this system is fully integrated in the cockpit and can be updated in real time by the aircrew.

The upgrade also introduced a glass panel cockpit display system with five separate screens that can show moving maps with tactical symbology overlays, images from the Electro Optical Camera, or a read out from the aircraft engine and electrical systems. In addition, the aircraft was fitted with a new fast roping beam that allows the rapid deployment of Special Forces (SF) from the main cabin door.

“The Merlin Mark 4 – colloquially known as the Commando Merlin – is proving to be a game-changing capability upgrade for the CHF,” said Colonel Mark Johnson, Royal Marines, Commanding Officer of CHF. “It has already demonstrated itself to be a critical enabler of the Royal Navy’s strategic outputs – contributing to the security of the UK and delivering the United Kingdom’s Commando Forces in the littoral.”

The first flight of the AW101 Merlin i-Mk3 took place on 24 March 2015 and delivery of the first aircraft took place seven months later. Initial Operating Clearance was declared on 24 March 2016, a week ahead of the scheduled date, when the seventh and final aircraft was delivered. The anticipated full operational capability for the MLSP is in late 2024. The first Merlin MK4 took flight at Leonardo in Yeovil on 24 October 2016.