Many pilots have moved from one type of flying to the other and have adjusted quite well, yet others just never seem to be able to make the switch. 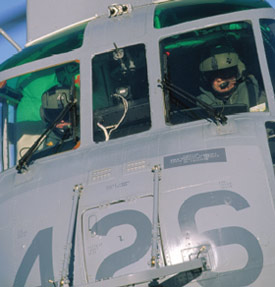 Of course, pilots from both walks of life will have their own
opinions. Some of you will have been commercial first and military
later and a few more will have been military first. The majority,
however, will have spent their entire career to date in just one
profession, and I know that as we run across one another we often
wonder just what makes one pilot better than the other. I wanted to
bring this subject up because of comments I have often heard coming
from both sides of the fence. I have been entertained by some of the
gross misconceptions we hold of one another.What’s scarier is how some
of us actually block transition from one community into the other based
on those misconceptions. So let’s look at some basic questions in terms
of both flying environments, and see what makes a better pilot.

Perception and Realities
Many pilots have moved
from one type of flying to the other and have adjusted quite well, yet
others just never seem to be able to make the switch.We all know of
someone who transitioned to the other world but somehow managed to
become more of an embarrassment to his or her former community.We have
all heard of these situations resulting in calls to never hire “one of
those guys” again. Of course, basic people skills that we learned in
kindergarten would tell us that we should not judge “all others” by the
actions of one. But reality has been harsher than that among aviation
communities. I have heard such comments as, “all civilian pilots are
cowboys,” “civilian pilots can’t work in a crew environment,” “civilian
pilots bust weather minimums all the time.” On the flip side you hear,
“military guys can’t deal with customers,” “military guys are too
spoiled to work on their own,” “ex-military guys have no clue how to
care for their own machine,” “DND guys can’t get it into their heads
that we are out here to make money and money can only be made when a
machine flies.” So why do so many of us have such divergent views and
what are the truths about these differences?