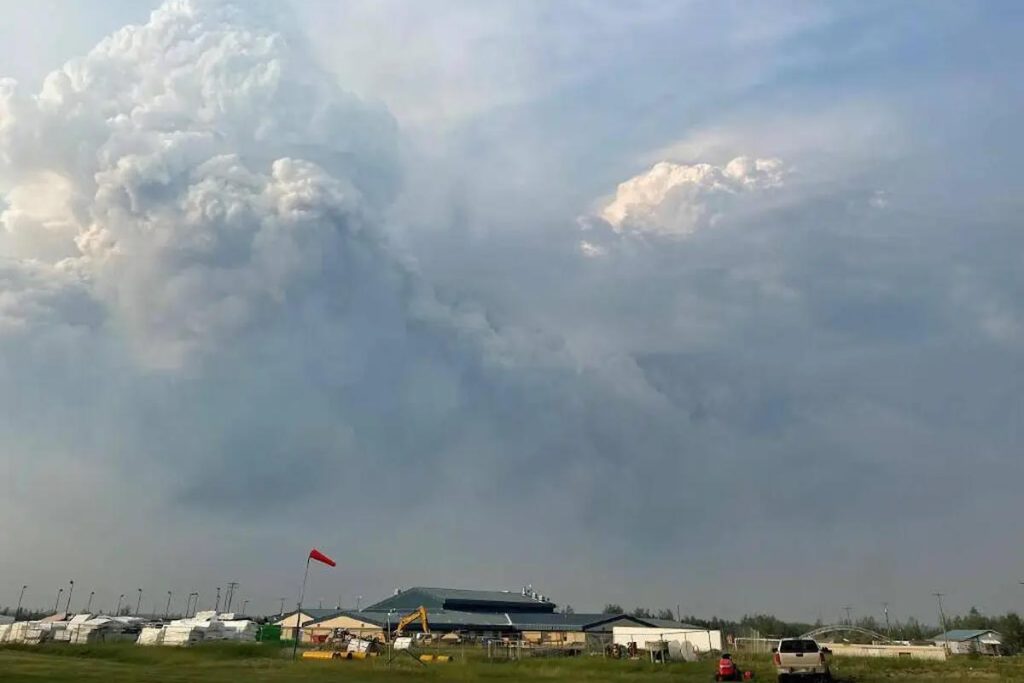 While wildfires rage in northern Manitoba, evacuees from a remote First Nation have found a safe haven in Brandon. However, concerns have been raised on social media regarding the level of care the evacuees are actually receiving in the Wheat City.

Around 2,000 residents of Mathias Colomb Cree Nation evacuated to Brandon, Winnipeg, Thompson and The Pas as firefighters battled a wildfire near Pukatawagan, the First Nation’s largest community.

In a social media post to a Pukatawagan community group on Facebook, Bev Anne Cote shared photos of open to-go food containers full of what appears to be plain fettuccine noodles and garlic bread.

Cote said that people staying at hotels in town have been fed dry fettuccine for up to four days in a row.

“People are being asked not to complain. I assure you, that complaining is nothing compared to what is not being complained about and what should be,” Cote’s social media post read. “We are lucky us people are resilient to put up with the gross mistreatment people are getting.”

Cote said the area’s advocates have been “missing in action.”

“This is a plea for help. People have been patient and trying very hard to survive.”

Brandon resident Amber Brightnose is trying her best to help the evacuees in their time of trial. She posted on Facebook looking for help to get the evacuees essentials for daily living, as supplies provided by the Red Cross only went so far. Brightnose issued a call for personal hygiene and baby care items. She also organized a group to bring the evacuees free soup and bannock.

Brightnose told the Sun she got involved in helping the evacuees when she heard that her friend, an evacuee, was doing the same.

“I started asking her what they needed and what I could do to help.”

Brightnose is from a small community not too far from Pukatawagan, and she attended high school with many people from the remote area.

“I wanted to be able to help them. It’s scary coming from a small northern community into a big city like Brandon.”

Brightnose has been working with her cousin to check in on two hotels where evacuees are staying, to see what items are needed. She’s made some lasting friendships in a short time, she said.

“When we show up, you can see the happiness in their faces. That’s why I will continue to help the community of Pukatawagan while they are still here. We want them to be comfortable.”

When it comes to food, Brightnose doesn’t think the evacuees are being treated fairly. They often don’t receive food in a timely manner, she said, and when they do get it, it can be cold or dried out.

“By then, children are hungry, or they’re having to spend money at McDonald’s for themselves because [the food] is taking too long to get there, or it’s cold and dried-up pasta. Community members tell us they’re short on bottled water as well.”

Brightnose said she will continue doing everything she can to help the evacuees, adding that the people she and her cousin are helping have been overwhelmingly grateful and appreciative.

“We got so many handshakes, so many hugs. They took pictures with us and told us how much we made them feel like home.”

Jason Small, a spokesperson for the Canadian Red Cross based out of Winnipeg, said the organization is providing support to the evacuees from Mathias Colomb Cree Nation as part of an agreement with Indigenous Services Canada.

Small said that includes lodging at hotels, and working with vendors to provide meals and other personal supplies such as hygiene kits, diapers and formula.

Small said he hasn’t heard anything about personal hygiene supplies running out.

“As far as I know, we have supplies, and if we’re low, we can restock.”

Small has heard complaints about the food being provided, but noted the Red Cross is working very closely with community members and leadership to meet evacuees’ needs.

“We try to work quickly with the community to make sure we remedy any problems.”

Small later contacted the Sun in an email to say that, although they were running low on supplies early in their response, there is no limit to the hygiene supplies available to evacuated community members.

“Our team is now fully restocked and is happy to provide the hygiene supplies to community members as needed.”