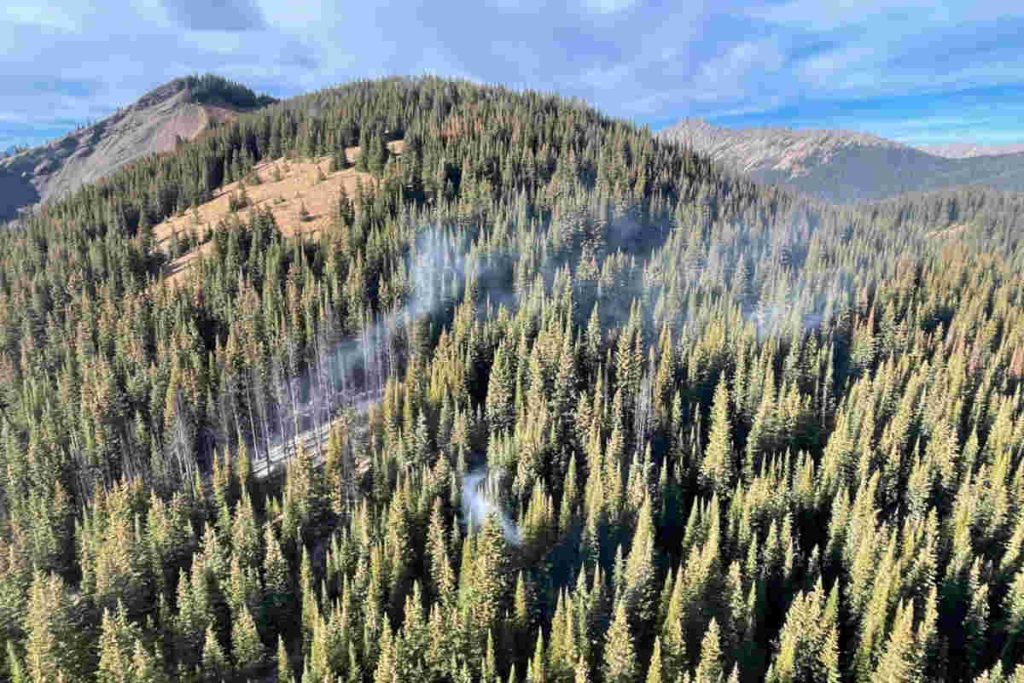 A wildfire that is two hectares in size is now under control in Peter Lougheed Provincial Park, near Kent Ridge in Kananaskis Country.

According to Alberta Wildfire, there were 9 wildland firefighers battling the blaze with assistance from one helicopter as of 11 a.m. Tuesday (Oct. 18). The fire was first detected around noon Oct. 13 and at its peak, required response from 12 wildland firefighters and three helicopters.

CWF167 in Peter Lougheed Provincial Park is now classified as being held at 2 ha. Meaning under current conditions it’s not expected to grow beyond established boundaries. Twelve firefighters and 4 helicopters continue to fight this wildfire. For updates: https://t.co/ojPSsWH0K4_ Alberta Wildfire (?AlbertaWildfire)

Alberta Wildfire information officer Anastasia Drummond said there is currently no immediate threat to the public or infrastructure in the area due to the remote location of the blaze.

Despite crews having to leave the fire unattended overnight given the challenging terrain and lack of cell coverage posing a safety risk, Drummond said the fire has not grown significantly.

“With the cooler temperatures at night and the longer nights, it’s calmed down a bit,” she said. “But of course, regardless of this particular wildfire, it’s really important to note that wildfires will ignite; they’ll sustain and they will grow in these conditions.”

The wildfire, she added, was determined to have been caused by lightning.

Conditions throughout K-Country currently range from abnormally dry to moderately drought-like, according to the North American Drought Monitor.

People are asked to avoid the area as crews and helicopters are working.

Drummond said Kananaskis Country is likely to be busy over the weekend with Environment and Climate Change Canada forecasting highs between 15 and 20 degrees Celcius, and cautioned visitors of the dry conditions in the area.

“We haven’t imported any additional support for the wildfire at this time, but we need to make sure that nobody is starting anything new in the coming days,” she said. “We need to keep those resources fighting this one active wildfire.”

According to the Alberta Wildfire dashboard, there have been 1,188 wildfires this year in the province.

The Bow Valley area has seen few wildfires this year after what has been a relatively quiet year, despite the dry summer.

The first wildfire of note was May 28 near Waiporous Village in the Municipal District of Bighorn which grew to two hectares. There was also a small fire on Aug. 12 near the Banff National Park east gate and a 0.0016-hectare wildfire near the Banff Fairmont Springs Golf Course on Aug. 21. All three wildfires were quickly distinguished with minimal damage to the landscape.