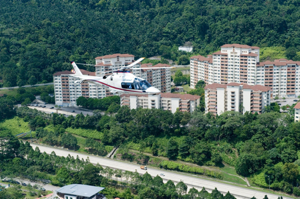 July 17, 2008 – AgustaWestland is
fully committed to investing in technologies and processes that reduce
the impact on the environment in all phases of the life-cycle of its
rotorcraft, from manufacturing and operations right up to its final
disposal. As part of this commitment, AgustaWestland is not only
playing a major role in the European Clean Sky Joint Technology
Initiative program as co-leader, but is also investing its own money in
programs that will deliver “greener” aircraft.

Under the umbrella of the Clean Sky program, AgustaWestland is
undertaking work in a wide range of areas including efforts to reduce
external noise signatures, reduce fuel consumption and investigate
“green” flight paths. Overall company goals (consistent with Advisory
Council for Aeronautical Research in Europe vision for 2020 targets)
include a 50  per cent reduction of carbon dioxide emissions through
drastic reductions in fuel consumption, an 80 per cent reduction of
nitrous oxide emissions and a 50 per cent reduction in external noise.
The research is aimed at the next generation of vertical-lift aircraft
that will enter service after 2015 as well as the possibility to
retrofit the technology into the existing product range.

AgustaWestland is taking a lead role in reducing external helicopter
noise – one of the main areas of study within the “green” rotorcraft
program. The company is studying intelligent rotor blade solutions,
including active blade control and other ideas to limit the acoustic
impact generated by the blades. AgustaWestland will conduct ground
testing of an active blade segment, complete downscaled wind tunnel
model testing and will eventually fly with an optimized rotor.

The company is leading investigations into creating more
environmentally friendly flight paths to improve “green” performance.
This will involve advanced noise abatement procedures for take-off and
landing for the purpose of giving helicopter pilots information in
real-time on their instrument displays so that they can select the most
effective approach to fly. This would not only produce quieter
operations but also potentially reduced fuel consumption.

The Green Rotorcraft program also includes research into increased and
more efficient use of electrical systems onboard helicopters.
AgustaWestland is working to make existing electrical systems more
efficient and also how they can replace hydraulically powered systems
on the aircraft. A company team is also investigating new technologies
to generate and store energy. One possibility is the use of fuel cells
to replace auxiliary power units on larger helicopters.