March 19, 2008, Saguenay, Que. -  AirMédic completed 14 rescue and transport missions during the week of March 9-15, making it its busiest week in the last eight years. 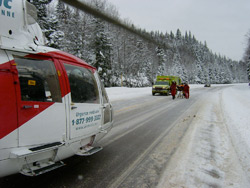 March 19, 2008, Saguenay, Que. –  AirMédic completed 14 rescue and transport missions during the week of March 9-15, making it its busiest week in the last eight years.

Marc Fouquet, head of the Saguenay base says that in one week, AirMédic accomplished what it would normally do in a full month.

“Year to year, the number of missions increases and with the week that just came and went,” says Fouquet, “we are more certain about the essential nature of the service that we offer.”

During the week, AirMédic personnel made eight inter-hospital transfers, completed three pre-hospital missions, two organ transports and a mission bringing a patient from Fort Lauderdale back to Quebec.

"With the donations that we receive, we are able to respond quickly and effectively to more and more emergency calls, such as we saw last week," says François Rivard, founder of AirMédic.

Currently, AirMédic is in the middle of a donation members drive in the region. The goal is to recruit 6,000 new members before the end of 2008.

In supporting the AirMédic Foundation, the donations are used to quickly acquire the medical equipment needed to undertake life-saving missions, but especially to quickly set up a children’s program.

The children’s program will offer emergency air transport to those children whose medical condition requires an urgent transfer to specialized pediatric centres.