Jan. 11, 2008, Middlefield, OH – Robinson Helicopter main rotor blade delamination on R22 and R44 helicopters has become the subject of FAA Airworthiness Directive (AD)  2007-26-12, superceding a company Service Bulletin. A permanent and one-time fix developed by Airwolf Aerospace, LLC has been awarded as an STC by the Federal Aviation Administration (FAA), and eliminates repetitive daily inspections and re-painting, as called for by the FAA. 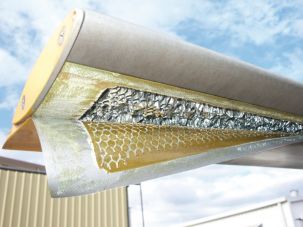 The AD notes that main rotor blade skins begin to debond (separate) at the skin-to-spar bond line on the lower surface near the blade tip. Debonding can occur when the bond line is exposed due to excessive erosion of the blade finish, or when corrosion occurs on the internal aluminum tip cap. Further, the blades are matched and balanced at the factory, implying that if one blade is due for fix or replacement, ($16,432 for each Model R22 blade, and about $23,060 for each Model R44 blade), it is likely the opposite blade will also need replacing.

The FAA estimates that this AD will affect 2290 helicopters registered in the USA alone. Globally, 8,000 Robinsons have been built to date, and logically due for inspection and repair/replacement.

Robinson Helicopter Company had previously issued Service Bulletins to inspect and address the problem using repeat-as-necessary paint applied to the affected areas, while Airwolf’s STC comprises a permanent, one-time application of Airwolf Rotor Blade Protective Tape (RBPT) to the outer section of the main rotorblades. The issuance of an AD elevates significantly the gravity and immediacy of the situation for all R22 and R44 operators, who now must perform a daily visual inspection of each blade, before flight.

Jonny Quest, Airwolf technical director, said this STC solves a recurring problem. “The factory ‘solution’ is really a band-aid, while ours is simple, effective and permanent,” he said. “It comprises the application of a specially-formulated adhesive polymer tape which has been time-tested by the military in both the Gulf War and the Iraq war.

“Water, dust, sand and other contaminates can’t penetrate the tape, while the factory ‘paint solution’ requires repetitive inspections and continual repainting throughout the blade life,” he added.  “However, the risk of a blade delamination is still great and the replacement cost very expensive if this occurs. The Airwolf RBPT is inexpensive insurance to prevent this from happening.”

Robinson operators, mechanics and maintenance departments can order the Airwolf RBPT factory-direct at www.airwolfaerospace.com or at 800-326-1534.