Bell Helicopter has announced the final delivery of the 15th Bell 407GXP to the Mexican Air Force (FAM). The contract was awarded in March 2015, and the Bell 407GXP fleet is currently supporting the FAM’s parapublic missions across the region. 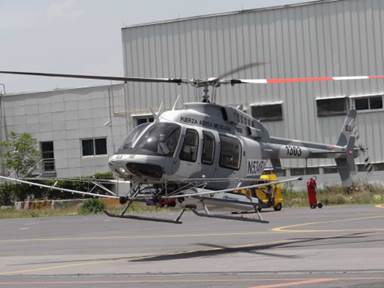 As the primary aircraft operating branch of the Mexican Armed Forces, the FAM covers the entire country, with 18 military air bases located across Mexico. The FAM have been operating Bell helicopters since 1973 with the delivery of a Bell 206-B, and their fleet currently includes the Bell 412EP, 212 and 206. The 15 Bell 407GXPs are operated by the 111th Air Squadron based at the Military Airbase in Zapopan, Jalisco.

“The Bell 407GXP is truly a multi-mission capable platform that can perform various missions at superior standards,” said Jay Ortiz, vice president of Latin American sales. “We are honoured by the Mexican Air Force’s trust in Bell Helicopter and our aircraft, and we are proud to have delivered the final Bell 407GXP to join their fleet.”

With more than 1,300 Bell 407 aircraft operating worldwide, there are more than 200 in parapublic configuration. The Bell 407 platform remains a popular aircraft among Bell Helicopter’s parapublic agencies operating Bell aircraft.