Bell Helicopter company has announced the delivery and entry into service of the Swedish National Police’s seven Bell 429 helicopters. The fleet is being used for law enforcement and search and rescue, including mountain rescue, across Sweden. 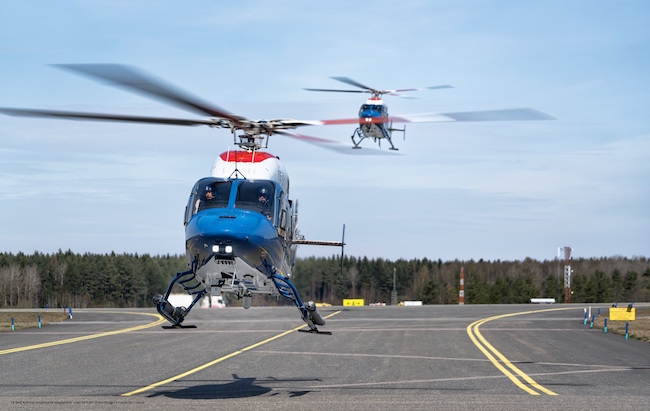 “This is now the largest Bell 429 fleet in operation in the European Union,” said Jakub Hoda, Bell Helicopter managing director for Europe and Russia. “Customers in Europe have shown great interest in the Bell 429 for law enforcement  [and search and rescue?] operation. Over a quarter of the Bell 429s in service across Europe today are flying parapublic missions, demonstrating the superior performance of the Bell 429.”

The Bell 429 delivers exceptional speed, range, hover performance and enhanced safety margins. The state-of-the-art technology in the Bell 429 includes a fully-integrated glass cockpit, advanced drive system, best-in-class WAAS navigation and IFR capability. The Bell 429 has more cabin space than any other light twin helicopter, with flat flooring and seating for seven passengers and one flight crew. When time is of the essence, the Bell 429’s 60 inch wide side doors and optional rear clam-shell doors provide quick and easy access.