Vancouver International Airport (YVR) hosted the 44th annual Canada’s Aviation Hall Of Fame Dinner Thursday evening and it was a veritable who’s who of the Canadian aviation and aerospace industry. 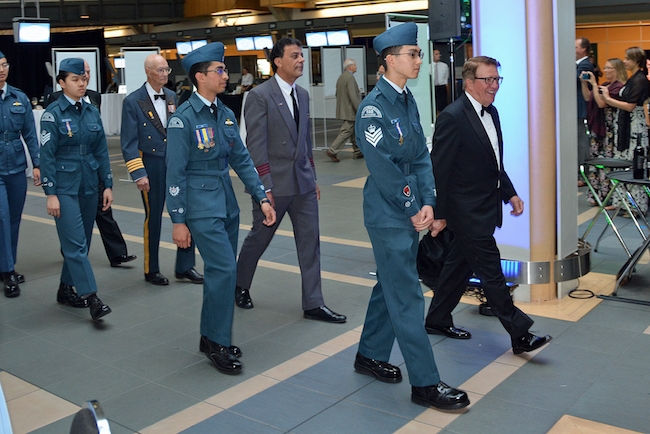 Almost 500 people filled the area between Gates 260 and 298 for the opportunity to meet and applaud this year’s inductees into Canada’s Aviation Hall Of Fame – Errol Boyd, Robert Deluce, Daniel Sitnam, and Rogers Smith. The Belt of Orion Award for Excellence accepted by Lt. Col (ret) Fern Villeneuve on behalf of the RCAF Golden Hawks aerobatic team.

After the dinner had been called to order, the inductees and honoured guests were escorted in behind the Vancouver Police Pipe Band and a colour guard drawn from local air cadet units.

Lt. Governor Judith Guichon welcomed attendees and took the opportunity to confide with the audience that at the age of 18, she had “got high” ¬– though she was quick to point out that she was referring to Skyway Aviation in Abbotsford. Aviation has always played a significant role in her life, as her husband flew bush planes in the Yukon and later the family used aircraft as part of its large ranching operation in B.C.’s interior.

As dinner was served, a video presentation detailed the accomplishments of the honorees:

Once dinner was cleared, the recipients had their opportunity to address the audience. There were several common threads that ran through the lives of this year’s honourees. There was plenty of humility sprinkled with a little humour. In one way or another, the realization of each of them that they didn’t do it on their own and in fact, could not have done it on their own. There were mentors at various stages of their lives, and also the parents who gave them the inspiration to mix with the perspiration.

Rogers Eben Smith got the biggest laugh of the night when he showed photo of himself at the age of one, taken all those years ago in Dawson Creek, B.C. All those years ago, his mother had written on the back of the photo, “save this for the Hall Of Fame.” Some things are written.

The keynote speaker was Vancouver Airport Authority CEO Craig Richmond. A former RCAF CF-104 and CF-18 pilot, Richmond spoke briefly of the continuing growth in traffic through YVR. Proof of that being that while the airport has this area of the terminal for meetings and dinners in the past, this would be the last time as the level of business has grown to the point where they need the gates.

On top of that, for the 8th consecutive year, YVR has been named the best airport in North America by Stytrax.