Eagle Copters Ltd. is ready to deliver a second Eagle 407HP helicopter to Helicopter Express. The Atlanta‐based operator will use the helicopter to support firefighting missions throughout the United States. The formal delivery of the aircraft will made during the Helicopter Association International Heli‐Expo Show in Dallas, March 6‐9. 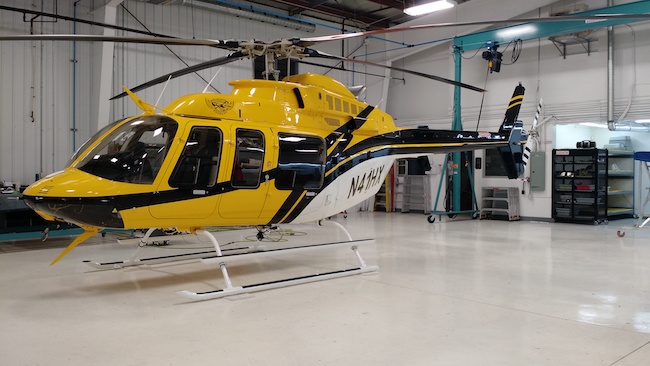 This brings to eight the number of Bell 407 helicopters converted to the Eagle 407HP model by replacing the standard engine with Honeywell’s proven HTS900 turboshaft engine. The Honeywell engine delivers the lowest fuel consumption and the highest power‐to‐weight ratio in its class, making it ideal for firefighting and other missions that require the lifting of heavy loads under hot and high conditions.

“This marks another major milestone for the Eagle 407HP program and the Eagle Copter‐ Honeywell partnership,” said Barry Kohler, Eagle Copters President & CEO. “This is a stock helicopter that we purchased, converted and sold to Helicopter Express, but we also can use our conversion kit to upgrade a customer’s existing aircraft with the HTS900 engine. The first aircraft delivered to Helicopter Express was a kit conversion.”

Helicopter Express has been pleased with the performance of its current Eagle 407HP, which was delivered in November 2016, according to Richie Kittrell, Chief Operating Officer.

“Our Eagle 407HP consistently gives us the performance we need to accomplish firefighting missions under the most demanding of conditions,” he said. “We look forward to adding another Eagle 407HP to our fleet.”

Eagle Copters has several additional conversions in the pipeline and plans to take delivery of 10 HTS900 engines from Honeywell in 2017 to meet current and anticipated demand for the Eagle 407HP conversions.

Using design and engineering licensed from Bell Helicopter, Honeywell and Eagle Copters launched the Eagle 407HP program to improve the performance of existing Bell 407 helicopters by replacing the standard engine with the Honeywell HTS900 engine. Under the partnership, Honeywell provides the HTS900 engine and configuration while Eagle Copters provides the aircraft, performs the engine installation and handles flight testing and certification. The partnership received a Supplemental Type Certificate (STC) covering the retrofit program in 2014.