Nov. 26, 2008 - Albacete, Spain - Lutz Bertling, President and CEO of Eurocopter and Juan Carlos Martinez Saiz, CEO of  Eurocopter in Spain, handed over the first EC135 manufactured in Albacete to the  Ministry of Defence for the operations of the UME (Spanish Army Response Unit)  today. 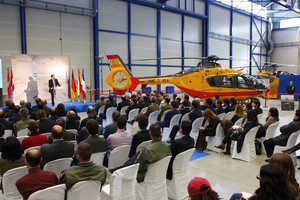 This delivery is a major milestone for Eurocopter and for Spain. It is the first time that a  helicopter is manufactured, assembled and delivered in Spain, an achievement which fully  meets the goal set at the inauguration of Eurocopter’s plant in Albacete (south-east of  Madrid). Opened in March 2007, this plant now employs 400 people and is scheduled to  have a workforce of 700 by the end of 2010. It was designed to incorporate the highest levels  of technology with the aim of developing a permanent helicopter industry with full  manufacturing competence in Spain.

Numerous key politicians were present at the delivery ceremony – namely the President of  the Autonomous Region of Castilla-La Mancha, Jose-Maria Barreda and the Secretary of  Defence, Constantino Mendez.

The EC135 assembly line in Albacete is one of Eurocopter’s two final assembly lines for this  light twin-engine helicopter, the other being in Donauworth (Germany). The EC135 is a  multipurpose helicopter renowned worldwide for emergency medical services and law  enforcement missions. More than 700 units have been delivered to 160 clients in 40  countries. Over 40 EC135s are currently operated in Spain.

In 2009, Eurocopter aims to deliver over a dozen EC135s from its Spanish facility. The  production of these aircraft, in addition to the manufacturing of the fuselage rear sections of  the Tiger and the fuselage forward sections of the NH90, consolidates the role of Albacete as  Eurocopter’s third pillar. Eurocopter in Spain also offers the following services: engineering,  customization, delivery and logistic activities, with complete responsibility for customer  support, marketing and program management.