Standing room only at the Vancouver convention 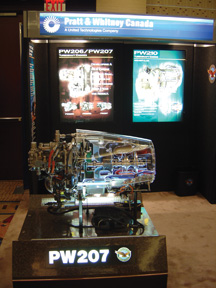 HAC president Brian Jenner opened the 2007 conference proclaiming this event as the largest ever with more than 800 registered attendees. In a booming helicopter economy the manufacturers were also posting greater sales than had been forecast. Seminar attendance was no less successful with standing room only at most of the brief courses that included Air Taxi, Flight Training, Dealing with the Media, Heli-logging, Safety, and suppliers’ updates.

Pratt & Whitney Canada announced that more than 40,000 of its engines have logged a cumulative total exceeding half a billion hours! With more than 50 engine types certified since 1994 appearing in a broad spectrum of fixed- and rotary-wing types, P&WC announced it will continue with strong investment in R&D to maintain its leading market position. An example of its success is the PT-6 variants which have expanded from approximately 500 to 2,500 hp from the same core turbine.

Simplex Manufacturing introduced the Javelin High Pressure Washing System that sprays high-pressure water from a directional boom for insulator cleaning on power lines. This promising tool will overcome large power losses on high-KVA lines, thereby creating another helicopter task with potentially prodigious profits. The system is retrofitted to the existing Simplex belly tank in short order and has a spray range of three metres from the end of the 18-foot boom. The entire system, including the fire suppression tank, retails for US$325,000. Although it is only approved on the AStar at the moment, STCs for the Bell 407 and other helicopters will be available shortly.

Absolute Fire Solutions Inc. of Prince George, BC debuted a potential bucket challenger to SEI Industries’ Bambi and received considerable interest and promises of beta testing from operators. The Sling Tank is reminiscent of crossbreeding the earlier lightweight version of the Bambi with the WaterBouy tank of yesteryear with its flat bottom seal into a rugged, resilient package. The company’s Phil Thalmann advises that pricing is similar to the competition, but claims the new tank is easier to use and less complex mechanically.

Forestry aviation managers from the western provinces actively participated in presentations and exchange of ideas on the mandatory implementation of Automatic Flight Following equipment by April 2008 for all hired helicopters. Other topics included minimum PIC times, currency requirements and other standards that need to be met by pilots in order to work on forestry contracts. In private discussion, attendees admitted they felt the forestry requirements were too high – but most are afraid to voice their comments lest the client blackballs them. Forestry officials have their own fears because increasing numbers of helicopters sit parked due to crew shortages while forestry agencies face an increasing number of fires with hotter fire behaviour gobbling up more land every year. It’s forecast that global warming, encroachment of the urban interface with forests and other factors are beginning to overwhelm the fire suppression assets. Given the worsening factors that created such devastation around Kelowna a few years ago, one wonders why forestry imposes such high requirements on aircrews thereby reducing the helicopter assets available to them for suppression Keith Davis of Davis Communications Group produced a fascinating two-part series on crisis management for operators who may be facing rabid journalists after a helicopter accident. Pre-planning and education in advance of a catastrophe can mean the difference between your company surviving entirely intact or plunging into the abyss of public opinion.

With our aging aircrew, the Injury Reduction through Fitness and Nutrition seminar by Delia Roberts piqued considerable interest. In conjunction with Alpine heli-skiing operations, Roberts is conducting continuing tests on personnel and has produced some surprising results on fitness and stress levels. To date the study shows that 80% of pilots have chronic back pain and 50% experience knee trauma.

HAC directors presented the results of their feasibility report on self-management for the helicopter industry. Similar to the successful Canadian Business Aviation Association program, there is some pressure from Transport Canada to self-administer our operations. This is a complex issue and much discussion ensued with strong opinions expressed. If HAC doesn’t become self-administering, Transport Canada may turn the program over to a less benevolent administrator. However, by the next day’s AGM, consensus was strong to pursue the possibility with an in-depth study. As a vote of confidence for Jenner, his contract as HAC president was extended another seven years.

Max Viz announced significant improvements in its vision enhancement infrared equipment and announced a budget system that retails for approximately 20% of the EVS 1000 system!  Operators vented their angst on suppliers such as Bell who have been caught short-handed on parts. Largely due to military demands for components to fuel the American war in Iraq, supplies have dried up for commercial operators leaving some helicopters grounded for months awaiting parts. Some observers claimed Bell’s buying up suppliers has exacerbated this problem. Although Bell has finished first in customer satisfaction for a very long time, some long-time Bell helicopter owners are now considering other companies for future purchases. Bell officials acknowledge their problems and claimed they were doing their best to rectify the situation, but this provided little salve to the wounds for owners of grounded helicopters. They also announced that market demands had increased prices from their suppliers and DOC price increases would be approximately 9.5% this year. It might be a little bit of a challenge for operators to tack this increase onto their rates.

Bell confirmed the 427 model is terminated as it grew into the vastly improved 429.  It is a SPIFR twin with a very large, flat-floor cabin area  with CAT A capability with a cruise speed of 142 knots and useful load of 2,700 pounds. A forecast DOC of $571 on two PWC 207 D1 engines and Garmin 1000 avionics package will make it very competitive in the industry.

The safety seminar discussed many issues including SMS. One observer subsequently noted we need to get away from the current “blame and shame” culture and finger-pointing at those who err. This system fails for the likely reason most pilots and AMEs figure accidents and incidents won’t happen to them, thereby putting them in the spotlight. Wrong! Many pilots, operators and AMEs told me privately we need to change the culture of our industry. Senior managers must set examples and motivate safe operations in the companies. Talking the talk isn’t enough – and statistics prove this. These attendees all asked me, how do we get the message across to fly safely? While I have struggled with the answer for years, a simple response must be that we walk the walk. In other words, stop nattering and batting the safety word off the walls – and simply strive for perfectly safe flying. The real challenge for good pilots isn’t the low-level flight down the tree-lined river valley, it’s conducting a flight with as much safety margin as possible. Wires or drivetrain failures will turn the low-level flight into a catastrophe – and yes, it can happen to you!

The Flight Training seminar discussed the new upcoming passport-sized licence and the language certification issue. Any helicopter pilots who may be questioned on whether they speak English adequately for that certification on their license need to look into this March 8, 2008 edict. Another potential surprise for operators is that aircrew must carry a passport if the flight takes them into American airspace – even if they don’t land!  Moreover, everyone in the helicopter must also be carrying a passport! It is now law since December 2006 that helicopter licence applicants must pass the written exam before taking their flight test.

All vendors queried about the success of their booth displays at HAC claimed increased interest from operators in this growing marketplace and the general consensus confirms this was the best
convention so far. They further stated they would attend next year’s Calgary convention.