The Maritime Helicopter Project (MHP) is one of a handful of major capital programs to escape a spending freeze imposed by Prime Minister Paul Martin. 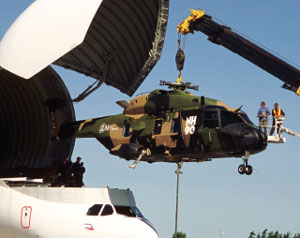 The Maritime Helicopter Project (MHP) is one of a handful of major
capital programs to escape a spending freeze imposed by Prime Minister
Paul Martin. Defence Minister David Pratt confirmed that a Request for
Proposals (RFP) had been issued, with the first of 28 aircraft expected
to arrive in the summer of 2008. The rest would be delivered at a rate
of one per month.

Good
news for the military, but not so for one of the three contenders. The
Lockheed Martin Canada (LMC) proposal to install a missions systems
suite on the European NH90 was deemed not compliant with Department of
National Defence (DND) requirements. LMC does not appear ready to go
quietly into that dark night and has already hinted at legal action.
Federal officials are being tight-lipped over where the deficiencies
lay, although sources in the operations community suggested cabin size
was one concern.

That leaves Sikorsky Aircraft Corporation’s
twin-engine S-92 up against E.H. Industries’ triple-engine EH101
Cormorant. Sikorsky and EHI have been given until April 30 to submit
proposals, clearing the path for a contract to be awarded this summer.

Asked
whether it was a coincidence that the RFP was issued almost immediately
upon Martin taking office, Ken Ready, acting MHP leader at DND, said he
"didn’t check the date of transition of government."

Whatever
the reason, it was a paradigm shift in a program that has been buried
in controversy almost from day one. Indeed, the government has signaled
a willingness to fast-track the process by tacking a provision onto the
RFP that entitles the manufacturer to a $2-million incentive for each
month the first aircraft is delivered ahead of schedule. The downside
is a $3-million penalty for each month the company misses its initial
deadline.