Oct. 9, 2008 - AgustaWestland, a Finmeccanica company, is pleased to announce that Ornge of Ontario, has ordered ten AW139 medium twin helicopters with an option for two additional aircraft. 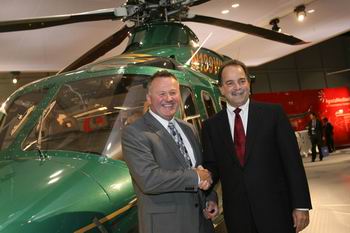 Oct. 9, 2008 – AgustaWestland, a Finmeccanica company, is pleased to announce that Ornge of Ontario, has ordered ten AW139 medium twin helicopters with an option for two additional aircraft. The overall contract value is about US$120 million. The aircraft will be equipped with full aero-medical interiors and be equipped also with a full de-icing system for operation in adverse weather conditions.

Ornge is a charitable organization that coordinates all aspects of Ontario’s aero-medical transport system. Ornge operates one of the largest aero medical and critical care land transport medicine programs in North America and currently has more than 300 employees in eight areas of operation. This includes over 200 paramedics, pediatric transport nurses and transport medicine physicians. Ornge’s expertise in transport medicine lies in its ability to serve more than 12 million Ontarians throughout a geographic area of 1 million square kilometres, delivering its scope of services through comprehensive door-to-door acute care aero medical transport. Ornge utilises over 30 bases across the province, 9 of which are staffed 24 hours, 7 days a week.

Designed with inherent multi-role capability and flexibility of operation, the AW139 is capable of carrying up to 15 passengers or six litters with two medical attendants or up to four litters and four medical attendants, in the most spacious cabin and with the best power reserve of any other helicopter in the medium twin-engine class. The internal dimensions of the large and unobstructed AW139 cabin make it an ideal choice for EMS and SAR applications. The flat floor and ceiling provide maximum cabin space and easy reconfiguration. An eight cubic meter cabin that is 1.42 meters high allows medical attendants easy access to casualties. Litter layout ranges from two to four in medevac configuration. If cabin access to the large baggage compartment is utilized, litter capacity can be increased to six. The AW139 is the fastest helicopter in its class with a maximum cruise speed of 167 knots and has outstanding performance, even in hot and high conditions, thanks to the two powerful P&W PT6C-67C engines.

More than 380 AW139 helicopters have been ordered so far by over 100 customers in over 40 countries to perform various roles including EMS, search and rescue, offshore transport, VIP/Corporate transport, law enforcement, fire fighting and utility.