Technicians with the Royal Canadian Air Force’s 2 Air Movements Squadron and 450 Tactical Helicopter Squadron on Tuesday, July 3, loaded a CH-147F Chinook onto a CC-177 Globemaster at the 8 Wing Trenton base in Southern. Ont. The Chinook is one of two such helicopters, in addition to four Griffons, headed to Mali where it will be part of Operation PRESENCE-Mali. This is the United Nations Multidimensional Integrated Stabilization Mission in Mali (MINUSMA), where a Canadian Air Task Force (ATF) is to participate for a period of 12 months. 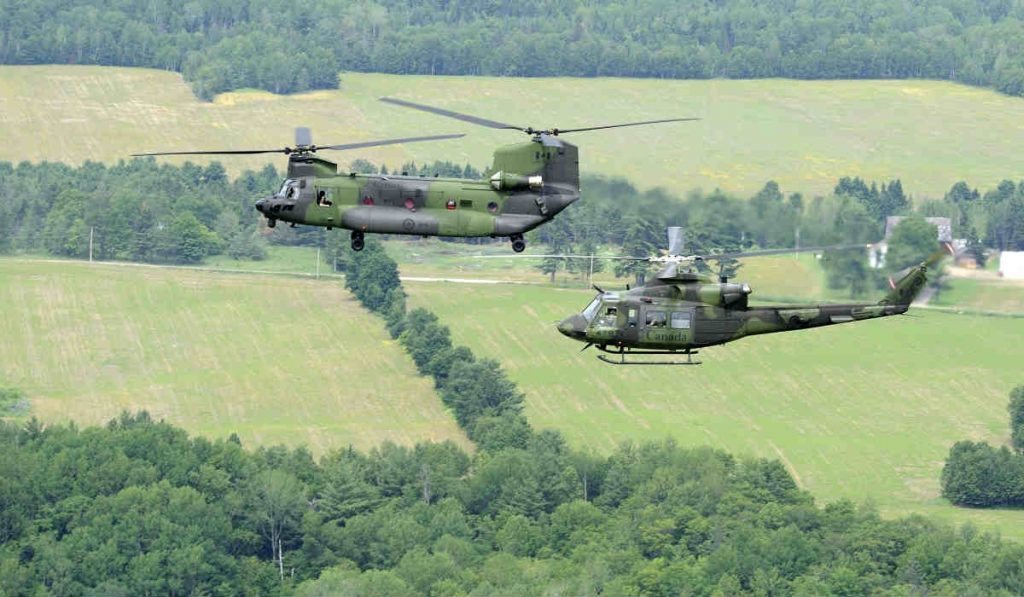 The two CH-147F Chinook helicopters will provide what the Royal Canadian Air Force (RCAF) describes as urgently needed transport and logistics capacity for the MINUSMA mission. The four CH-146 Griffon helicopters will provide armed escort and protection, along with aircrew and groundcrew. The deployment will include a number of Canadian Armed Forces troops who will facilitate medical evacuations for troops on the ground and provide logistical support.

“As a responsible member of the international community, we recognize the importance of working collaboratively with our partners to promote peace and security,” said Defence Minister Harjit Sajjan, earlier this year when the deployment was first announced. “Supported by our diplomatic negotiations, I am confident we can help make a real difference in this region through the deployment of the Air Task Force.”

Canada’s contribution will join 57 MINUSMA partner countries in their continuing efforts to bring sustainable peace and stability to Mali and the Sahel, explains the RCAF.

– The Vancouver Principles, focused on ending the recruitment and use of child soldiers around the world;

– The Elsie Initiative, a pilot project aimed at rapidly increasing the number of women police and military deployed on UN peace operations, supported by the expertise and political commitment of a group of countries who share Canada’s ambition for change;

– A range of Smart Pledges and high value military capabilities to be deployed in a five-year timeframe, with planned and predictable rotations with other member states, aimed at leveraging Canadian expertise. The pledges include a Quick Reaction Force and accompanying equipment, an Air Task Force of medium utility and armed helicopters, and tactical airlift support to address critical gaps in the UN’s ability to transport troops, equipment, and supplies to their missions;

– The first Smart Pledge, a CC-130 Hercules aircraft to provide tactical airlift support for the UN’s Regional Support Centre in Entebbe, Uganda, was announced in Vancouver and preparations for deployment are currently underway; and