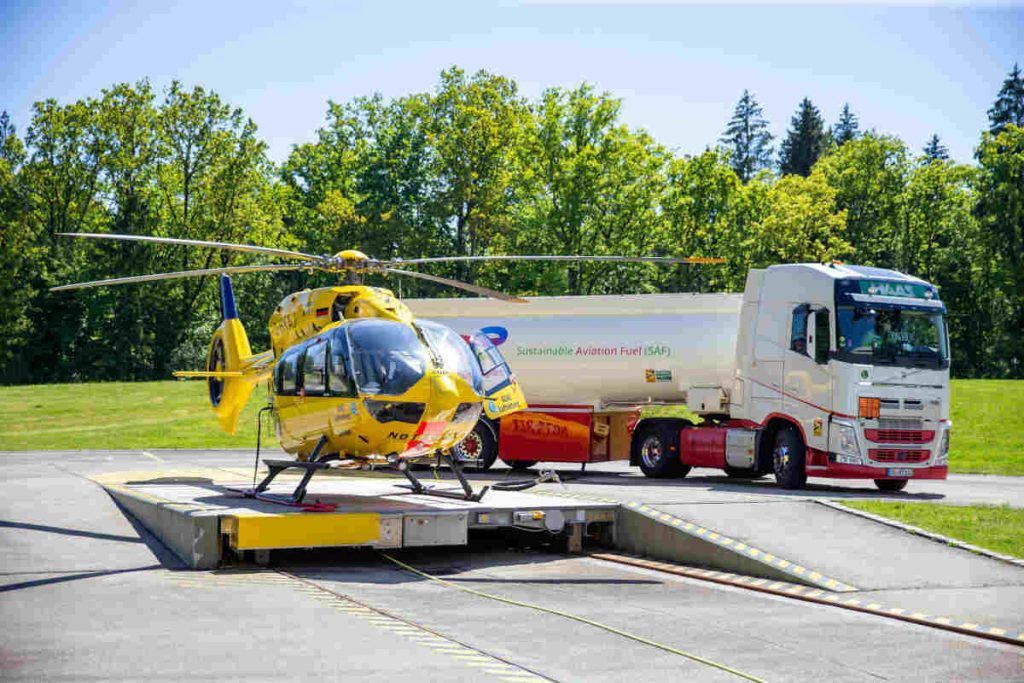 Airbus reports that a rescue helicopter has flown on sustainable aviation fuel (SAF) for the first time. Operated by the German non-profit organization ADAC Luftrettung, the Airbus H145 rescue helicopter had its Arriel 2E engines refueled with biofuel, a type of SAF, at the air rescue station at Munich’s Harlaching Clinic in the presence of the ADAC Foundation’s board of directors, as well as the managing directors and top management of ADAC Luftrettung, the engine manufacturer Safran Helicopter Engines, the helicopter manufacturer Airbus Helicopters, and the energy company TotalEnergies.

Airbus explains, together, these companies will be a driving force in the decarbonization of helicopter flight by developing alternatives to conventional aviation fuels.

The H145 was using a second-generation biofuel, explains Airbus, which reduces CO2 emissions up to 90 per cent compared to its fossil equivalent, because it is produced from residual and waste materials from the circular economy such as used cooking oils and fats. As a result, Airbus notes the fuel has no impact on agricultural food production.

The fuel used for the first rescue helicopter flight in Munich was produced by TotalEnergies at its facility in France from used cooking oil, without using any virgin plant-based oil. With this SAF, Airbus explains the ADAC Luftrettung fleet could achieve a 33 per cent reduction in CO2 emissions, which, with more than 50,000 rescue missions and more than 3.3 million kilometers flown per year, equates to a reduction of around 6,000 tons of CO2.

ADAC Luftrettung and engine manufacturer Safran Helicopter Engines are launching a SAF project with one ADAC rescue helicopter in Cologne. The project will study all aspects of biofuel usage on the H145, with an operational campaign to start as early as summer 2021.