As soon as we drove into the Ogoki trailer camp, it was déjà vu. Yes indeed, I had flown a 205 for Campbell Helicopters from this base ten years earlier on my last Canadian commercial operations before devoting myself to overseas fire suppression training programs. 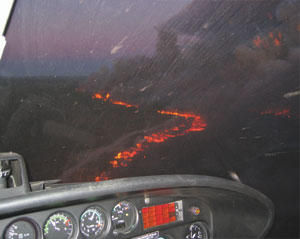 The engineer on my Bell L3 insisted we depart Dryden at 0 Dark plus 30
hours to accomplish an epic drive across northern Ontario so we could
arrive after supper to assume duties in a remote northern fire
suppression camp. If I had wanted to spend my life in a truck, I would
have followed in my father’s footsteps as a transport driver – a career
that took his life at the age of 36 – as a passenger. I was all too
aware of my father’s demise on this very stretch of road. Now, I was
really looking forward to the relative safety of helicopter flying.

As
soon as we drove into the Ogoki trailer camp, it was déjà vu. Yes
indeed, I had flown a 205 for Campbell Helicopters from this base ten
years earlier on my last Canadian commercial operations before devoting
myself to overseas fire suppression training programs. The base hadn’t
changed much if you didn’t count the dozens of temporary tents covering
the grasslands between the accommodation trailers and cookhouse.

Nipigon
20 had been an awe-inspiring fire that was challenged with a quick
initial attack. It then blew up with a massive air downburst that
overwhelmed the dozens of firefighters who were forced to flee for
their lives into a swamp. Minutes later the trusty helicopter crews
swooped in for a heated rescue of all personnel. Still, tens of
thousands of dollars of equipment were lost. This fire expanded very
quickly into a 14,372 hectare behemoth in the midst of significant
timber and logging equipment assets motivating the OMNR (Ontario
Ministry of Natural Resources) to set up 76 camps containing hundreds
of firefighters to tame the fiery beast.

Calling Ogoki a fire
camp was an oxymoron during my arrival as the heavens had opened and
virtually vanquished the inferno. Mud and floating helicopter pad
cross-members became the new challenge – but only for a few days. Then
the humidex quotient soared above 40 for weeks on end and the land
regained its parched threat.

The chap I replaced was in such a
hurry to get out of camp that I was never introduced to the fire
suppression overhead team and worked behind the power curve for a few
days. Knowing who to see for various support services was to be another
new challenge. An hour after arrival I wasn’t even settled into
the-semi-private trailer accommodations when I was thrust into the
cockpit for a late evening commissary delivery flight to various camps
– thank goodness my passenger knew the location of the landing sites
around the fire’s 128-kilometre periphery. While this Longranger had
two GPSs, the one I was familiar with had an intermittent antenna
connection and the other had no instruction manual so it was back to
dead reckoning over this large mass of parched wasteland. Talk about
jumping out of the frying pan into the fire!

While I didn’t have
a lot of time on the L3, the support of other Longranger pilots at the
base proved very helpful. It was surprising to see all the pilots wore
bush clothing, making them difficult to distinguish from ground workers
in the camp environment. Like the OMNR firefighters, my working uniform
is fire resistant Nomex. A number of pilots expressed a wish that they
could afford such a luxury for themselves. But, like helmet, boots and
gloves, this protective gear should be mandatory on our shopping lists.

Camouflaged
in their bush clothes, it took a week before I knew all the airframe
drivers and wrench twisters for each machine. Many thanks to Wayne of
Whiskair and the engineering staff from Remote Helicopters for their
guidance and support, as my engineer had to abandon me to drive a
furloughed pilot to Thunder Bay for his flight home.

During my
acceptance of this summer flying task, it was initially understood my
assignment to the company’s new Dryden base would entail flying VIPs
for Weyerhaeuser – and a few other tasks. As a result, I wasn’t
well-prepared mentally for a summer of bush camps. It’s grand that the
OMNR warehouse at Ogoki issued most of life’s needs – such as sleeping
bag, air mattress, pillows and a host of personal accoutrements for my
prolonged camping trip.

Primarily, my Ogoki flying ops required
hovering a hundred feet or so above the fire line with an OMNR staffer
up front and an infrared technician in the back with the door removed.
The latter would scan the forest for ‘hot spots’ and I would follow his
bearing and distance directions so he could drop a roll of toilet
paper, which would unfurl and hang up in the trees to mark the hot spot
for ground crews to extinguish. This is some of the more challenging
work on fires due to the three-hour flight duration and continuous
exposure to the ‘avoid’ area of the height/velocity curves. The natural
stability attendant with forward flight is absent during hovering
operations, and the need to meander in every which direction to follow
the fire line results in challenging handling due to the winds
affecting the helicopter from every quadrant. Loss of tail rotor
effectiveness, minimal airspeed in downwind tracking and wind speed
variations conspire to make controlled, smooth flight a challenge –
especially considering the Longranger is near gross weight initially
and hovering out of ground effect. One attempts to minimize any control
inputs that might cause jerky cabin movement as the technician is
hanging out the back door – with the company-supplied safety harness
secured to partially restrict his movement.

It was my goal to
plan the scanning runs to maximize the time spent into the wind or
secondarily with a crosswind that enhanced tail rotor control. Not only
is this smoother, but the likelihood of a reasonably successful
autorotation after a drive-train failure of any sort is more likely. It
seems to me that many chopper pilots assume that components will never
fail and enter the avoid areas of the curve without concern.
Personally, as an aged aviator approaching 60, I am well aware of too
many acquaintances lost to power-train failures at inopportune times.

On
this note, it seems common to see pilots pulling in armfuls of
collective in a lightly-loaded helicopter and soaring upwards in
soul-satisfying leaps, but this practice is dangerous and unfair for
passengers who are oblivious to the increased threats. Similarly, one
often observes helicopters poised on the end of dangling long lines
when a short strop would suffice for the task. Flying into the teeth of
danger is not prudent when good planning and professionalism can
minimize flying exposure in avoid areas. No sense tempting fate.

A
long day ends when the pilot time expires with eight hours airborne or
14 hours on duty. Now, without an engineer, it’s time to clean, inspect
and lubricate the helicopter as required. By the time the tasks are
completed each evening, summer’s darkness descends and rescues me for
an attempted night’s sleep. Not everyone in camp needs to get up early
for breakfast, so ‘night owls’ usually create a modicum of noise well
into the dark hours. Although regulations in the CARs and for that
matter OMNR’s manuals theoretically provide for eight hours of
uninterrupted rest, in practice this is often difficult to achieve
surrounded by night sounds, and the cumulative effects of relatively
sleepless nights can wear a person down. When combined with a form of
‘cabin fever’ from repetitious daily operations, crew members can be
left feeling they’re playing a part in the movie ‘Groundhog Day.’ The
resulting emotion effects a general malaise. The challenge then is to
overcome this feeling as it can lead to a ‘devil-may-care’ attitude.

For
the personable pilot or engineer, this can be accomplished with social
interactions in camp to pass the ground-bound time. Listening to others
relate their fire stories and life experiences provides entertainment
and often educational tidbits that allow us to learn from the mishaps
of others. We won’t live long enough to make all of the mistakes
ourselves!

Reminiscing on those flight operations months later,
it’s easy to recall my passion for this profession. Compared to
managing a city office, field operations grant pilots the right to
enjoy outdoors life, balance judgment and finesse in a pirouette that
is like a dance with death. The risks are high, but the emotional
rewards overwhelm any consideration to pass one’s time on the planet in
some mundane pastime.