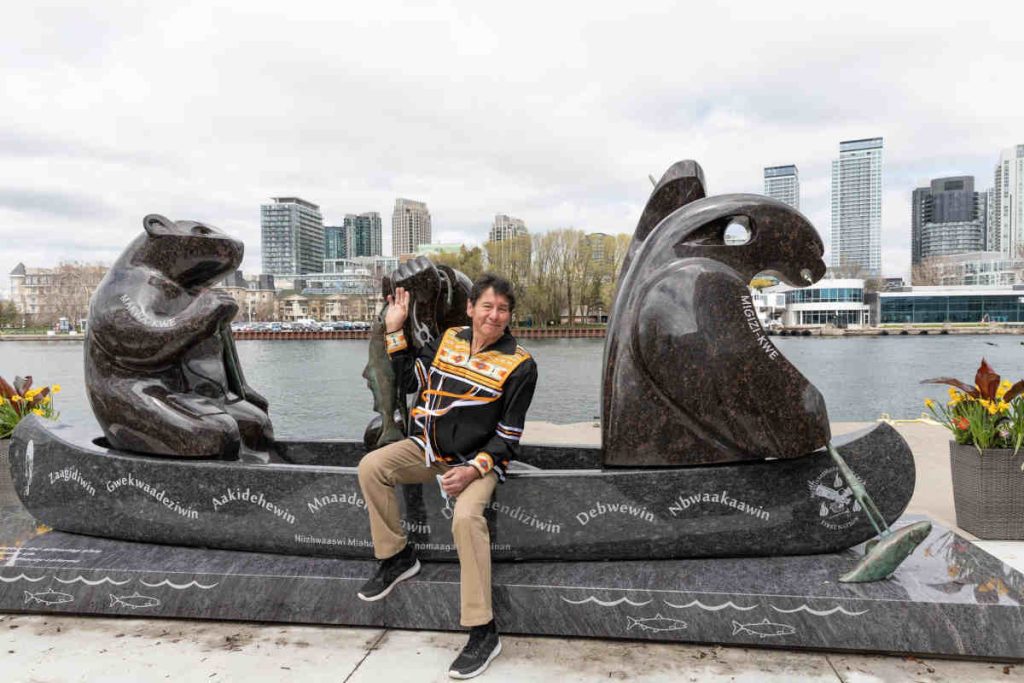 The work is created by artist David M. General. It stands about 16 feet long. It highlights the history of the relationship of the Mississaugas of the Credit First Nation with the shoreline, and features references to the Medicine Wheel; the Seven Grandfather Teachings, as well as poetry from current Gimaa (Chief) R. Stacey Laforme.

“This is such an important step as we come to understand the deep connection that all people have to our Mother, the Earth,” Laforme said. ”It will be a learning experience for visitors to the City of Toronto, and a moment where returning residents can reflect on the history of the land they call home.”

General has been working as an artist since 1975. He’s had exhibitions around the globe. He serves as a trustee of the McMichael Canadian Art Collection Board of Governors, a member of the Aboriginal Advisory Committee of the Canada Council for the Arts, is a director on the Board of the Ontario Arts Council and an Indigenous mentor/advisor at OCAD University.

General is a member of the Mohawk Nation, Wolf Clan of the Six Nations. He said Maanjidowin: The Gathering represents “relationships Indigenous communities and nations have with land, water and sky.”

While the sculpture began as a concept nearly a half-decade ago, the initial plans for it were laid out in 2017. The unveiling occurred on May 4.

“It took a little longer than we had thought. Like so many things in life and with COVID, it had gotten away a little bit,” said Deborah Wilson, VP of communications and public affairs of PortsToronto, in an interview with Windspeaker.com.

But back in 2017, she said they had a “great meeting” with Chief Laforme, “and one of the things he articulated so passionately was how much he would like to have some sort of recognition along the shores of Lake Ontario.”

In a follow-up meeting, the plans for Maanjidowin were presented by General.

“Within minutes, unanimously, everyone in the room said back to us, that’s what we want,” Wilson said.

The sculpture is on the Toronto Island side of Billy Bishop Toronto City Airport on the south dock wall of the west gap, which was a carefully calculated choice.

“It overlooks the water and that was very intentional,” Wilson said. “If you’re just there for a nice walk on a sunny day, you can take the ferry across and be right there.

General echoed these statements, while adding in a bit of history.

“Mississaugas of the Credit have long shared resource rich shorelines, including an archipelago situated within Toronto harbour. The artwork presents three spirit beings fishing bountiful waters in a canoe bearing teachings, direction and symbolism that guide fulfillment of inherent rights and responsibilities.”

Around the sculpture, there’s signage and QR codes to scan, which helps explain the history and significance of the artwork.

“We’ve tried to do our best to give access to that kind of information so that it’s a teaching tool as well,” Wilson said. “You can learn a little bit more about the Mississaugas of the Credit, which was ultimately the purpose of the sculpture.”

Toronto Mayor John Tory offered his praise for the sculpture.

“Maanjidowin: The Gathering is a sculpture that perfectly exemplifies this program and demonstrates the ongoing commitment needed to ensure diversity and community is represented through public art,” Tory said.