Bell Helicopter has announced an agreement for the purchase of the first Bell 407GXP in Nepal. This will be the customer’s first Bell helicopter and will be outfitted for multi-mission capabilities including travel and tourism. 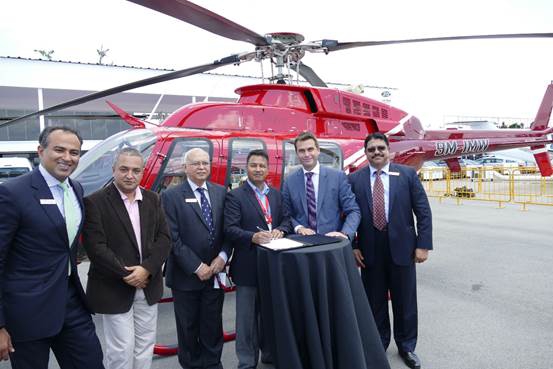 “At Simrik Air, we pride ourselves on meeting any helicopter mission requirement – whenever and wherever – and safety remains the top priority in our company, which is why the Bell 407GXP is a great fit for our team,” said Capt. Rameshwar Thapa, Chairman, Simrik Air Pvt Ltd. “After testing the aircraft and experiencing first-hand the maneuverability and smooth performance during the recent Bell 407GXP demo tour in Nepal, we could not be more thrilled to add the Bell 407GXP to our fleet.”

Bell Helicopter introduced the latest variant of the popular Bell 407 platform at Heli-Expo 2015 in March, with great customer interest. The new aircraft incorporates the reliability and advanced technology of the Bell 407GX platform, and introduces performance enhancements, payload increase and pilot workload reduction.

“We continue to make performance enhancements to our modern product line and customers are taking notice,” said Patrick Moulay, Bell Helicopter’s vice president of Global Sales and Marketing. “Given the diverse needs of our customers, it’s imperative they have a multi-mission capable aircraft that can perform under varying circumstances – including adverse weather conditions.”

“This is a significant milestone for the Bell Helicopter team, and we are honored Simrik Air has purchased this proven aircraft, which is designed to maximize power, safety and reliability for their operations in Nepal, and we look forward to supporting their missions for years to come,” added Moulay.