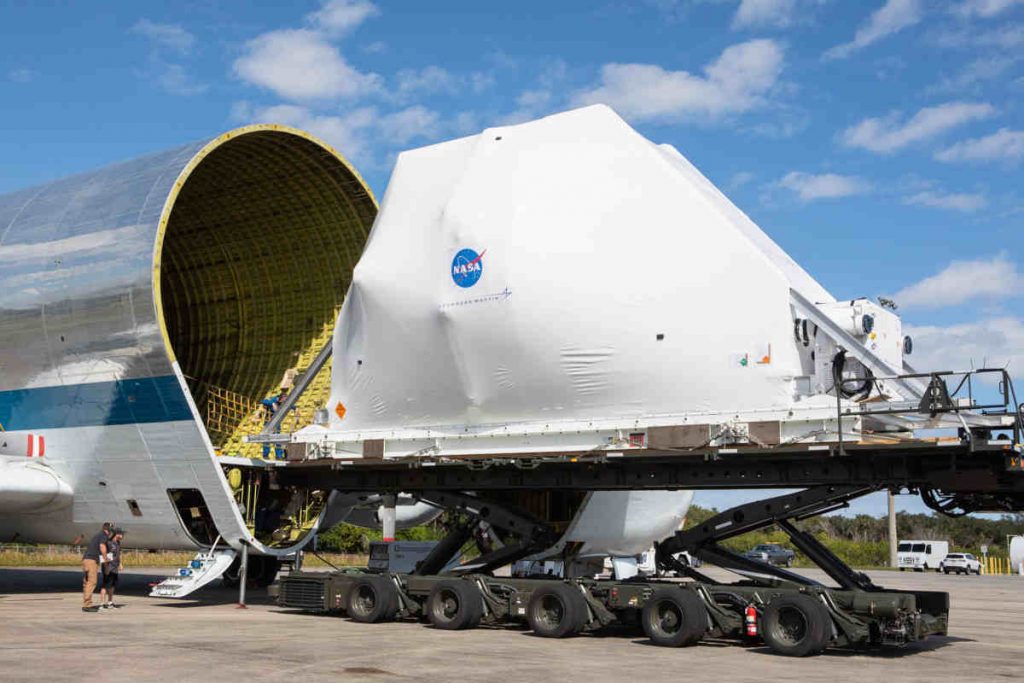 Orion is loaded into the Super Guppy at Kennedy Space Center. (Photo: Airbus)

The Orion spaceship on November 24 was loaded onto a Super Guppy aircraft at the Kennedy Space Center to move it to the world’s largest thermal vacuum chamber at NASA’s Plum Brook Station. The Super Guppy was built by Aero Spacelines primarily to transport the huge rocket stages used within NASA’s Apollo program, according to Edgar Cortright’s Apollo Expeditions to the Moon. The first Super Guppy flew in 1965 with five models subsequently built in two variants.

The Orion Multi-Purpose Crew Vehicle is a U.S.-European spacecraft program intended to carry a crew of four astronauts to destinations at or beyond low Earth orbit – into deep space, potentially Mars. The spacecraft will initially target astronaut missions to the Moon, scheduled to begin on 2024 as part of NASA’s Artemis program. The Orion will launch on NASA’s new heavy-lift rocket, the Space Launch System (SLS).

The Super Guppy carrying Orion landed in Mansfield, Ohio, before the spacecraft was finally transported to Plum Brook where it will undergo the hot test phase for the next several months. The testing, simulations of extreme space conditions, is to be led by a team of engineers and technicians from Airbus, the European Space Agency (ESA), Lockheed Martin and NASA.

“With the tests, we will show that the spacecraft’s systems work as planned and at the same time ensure safe operation for the astronauts on future missions – both on the ground and on board,” said Matthias Gronowski, chief engineer for the European Service Module that Airbus is building for NASA on behalf of ESA.

Airbus explains the tests at Plum Brook will be conducted in two phases, including a 63-day thermal test in which Orion’s electrical systems will be switched on and operated under vacuum and in temperatures which simulate the conditions in space. During this phase, the spacecraft will be exposed to extreme temperatures from about minus 115 to plus 75 degrees Celsius to reproduce the conditions the spacecraft will be exposed to, when in direct sunlight and in shadow in space.

The second phase is an electromagnetic compatibility test, which lasts for about 14 days. Airbus explains each electronic component emits a kind of electromagnetic field that can affect the performance of other nearby electronics. These tests are designed to ensure that the spacecraft’s electronics function properly while operating.

“This is a very important milestone for the journey to the Moon,” said Gronowski. “The international team has been working towards this goal for three years now, and in recent months we have mechanically and electrically connected the Crew Module [astronaut capsule] and the European Service Module at Kennedy Space Center. What matters now is that we can show that the service module works under the extreme conditions of space.”

ESA’s European Service Module will provide propulsion, power, air and water for the astronauts, as well as thermal control of the entire spacecraft. Airbus in Bremen, Germany, is already building the second Orion Service Module, with which astronauts will fly to the Moon and back to Earth for the first time – reaching speeds of up to 20,000 miles per hour.

After successful testing at Plum Brook, the Super Guppy will once again transport the Orion back to NASA’s Kennedy Space Center, where further tests and preparations for integration with the SLS rocket will take place before the first launch of Artemis I at the end of 2020 – without astronauts on board. Launch tests for the new Orion Service Module are scheduled for the 2022/2023 timeframe.