Textron Inc. on March 24 announced the Bell Boeing V-22 Osprey has logged more than 600,000 flight-hours. Built by Bell Textron and Boeing, the V-22 fleet has grown to more than 400 aircraft and is operated by the United States Marine Corps, U.S. Air Force, U.S. Navy and the Japan Ground Self-Defense Force.

Textron notes the V-22 is the only military production tiltrotor aircraft in the world, providing a unique combination of speed, range, maneuverability and logistical capability.

“There is no other aircraft in the world capable of matching the unique capabilities of the Osprey,” said Kurt Fuller, Bell V-22 vice president and Bell Boeing program director. “The 600,000 flight-hours represent countless tactical, logistical and humanitarian assistance missions, and the dedication of the men and women who maintain and operate the aircraft every day to keep it an advanced aircraft.” 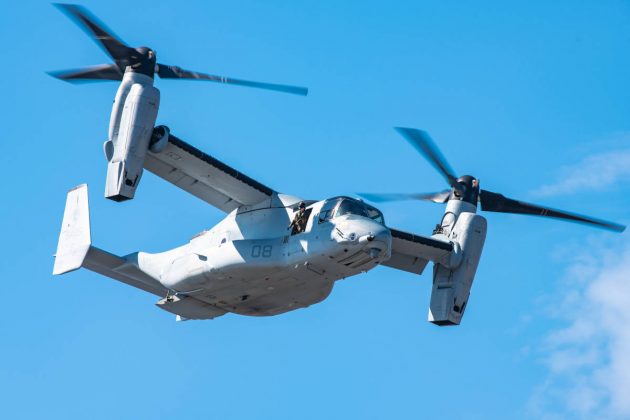 Bell Boeing directly supports V-22 readiness to squadrons, including maintenance support, training, on-site field representatives, data analytics and new and repaired parts. The Naval Air Systems Command, for example, recently awarded Bell Boeing a contract to deliver and install kits for nacelle improvements and the conversion area harness onto the CV-22 aircraft for the Air Force. The program refines the design of the nacelles and wiring harnesses for better reliability and maintainability, ultimately reducing repair time and improving readiness.

Recent program accomplishments include the Osprey’s latest variant, the CMV-22B, assigned to the “Titans” of Fleet Logistics Multi-Mission Squadron Three Zero, completing their first delivery of an F-35 engine to the USS Carl Vinson, along with successful paradrops with the U.S. Navy’s parachuting team, “The Leap Frogs,” earlier in the year.

“From its first flight over 30 years ago to achieving this significant flight-hour milestone, the V-22 has a demonstrated legacy of mission success,” said Shane Openshaw, Boeing V-22 vice president and Bell Boeing V-22 deputy program director. “As we look at optimizing future sustainment and support, our customer partnerships and commitment to innovation, flexibility and agility will ensure we build on the aircraft’s ability to support whatever the mission demands.”