Bell Helicopter has announced the successful first flight of the Bell 525 Relentless. The maiden flight of the super-medium helicopter took place at the company’s aircraft assembly center in Amarillo, Texas. 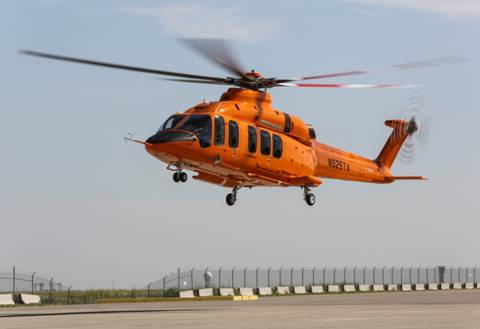 “The Bell 525 was announced at Heli-Expo in 2012, and we are proud to have achieved this milestone.  We have diligently executed our schedule to design, develop, build and test the aircraft, and look forward to the next phase of flight testing as we work towards certification,” said Matt Hasik, executive vice president of commercial programs at Bell Helicopter. “The marketplace has been awaiting the transformational capabilities of the Bell 525 and we continue to see growing customer demand from around the globe for this aircraft.”

The Bell 525 was designed with input from our Customer Advisory Panel as an aircraft to meet future requirements for operational safety, payload & range, cabin comfort and configuration and reliability. One of the unique characteristics of the Bell 525 is the ability to perform CAT-A takeoffs and landings, to and from a helipad at maximum gross weight. Even in the event that one of the two engines fails, the Bell 525 provides sufficient power to maintain occupant safety while lifting off with a single operational engine. With over 60 helicopters reserved under letters of intent, the Bell 525 is designed to provide operators and end users unmatched situational awareness and the ability to perform a wide variety of missions under challenging weather conditions.

“The Bell 525 performed extremely well today,” said Troy Caudill, senior flight test pilot at Bell Helicopter. “I am excited to be a part of the development of this advanced aircraft and help define the future of vertical lift.”