Although helicopter belly tankers were uncommon a few years ago, they are gaining an increasing share of the firefighter’s marketplace. 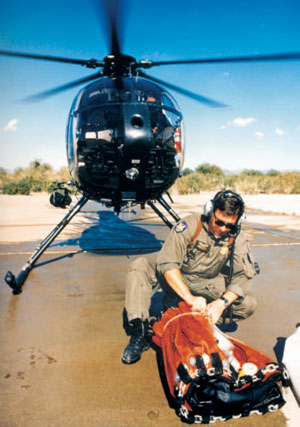 If you are looking for an intense conversation between heli pilots
bring up the pros and cons concerning relative performance between
helicopter belly tanks and suppression buckets carried as external
loads. In order to create a fair comparison, we will consider the
installation of these systems on the ubiquitous Bell 205, 212, UH-1H
series of medium helicopters that enjoy a great deal of suppression
acceptance.

Although
helicopter belly tankers were uncommon a few years ago, they are
gaining an increasing share of the firefighter’s marketplace. Why?
While there are a few advantages found among the tanks offered, their
prime attraction for many is the fact they cannot be jettisoned….
Flying with a slung load (bucket) over populated areas is verboten in
many countries with the result that markets such as Los Angeles and
other cities surrounded by forests are turning to the fuselage mounted
tanks. These tanks preclude the inadvertent dropping of a bucket on the
tax paying populace with the result belly tanks are now spreading to
the third world. Another reason for their growing popularity is the
fact that many militaries and similar agencies with large helicopters
are taking on the fire suppression role in their countries in the
absence of civilian operators. The truth is, many of these armed forces
pilots have never flown a slung load!

Previously, most belly
tanks also offered other benefits in terms of door sequencing, partial
load drops and the ability to easily carry mixed internal loads. These
benefits have been matched with new options on equipment such as the
Bambi Bucket and bucket evolution has closed the gap.

Installation Considerations
The
most popular bucket system for the Bell 205 is the model 3542 Bambi
Bucket system with a capacity of 350 gallons (1663 liters). The system
weighs 176 pounds (76 kg) compared to 418 pounds (190 kg) for a
competitor’s fiberglass belly tank with a capacity of only 269 gallons
(1279 liters). The bucket only requires the installation of an
electrical plug near the hook and the trigger button at a convenient
location in the cockpit. It takes a couple of minutes to attach the
bucket to the hook and plug and of course it can be jettisoned during
an emergency in a second.

Belly tanks require approximately a
half hour to bolt directly to the helicopter structure and add
approximately 400 pounds to the basic weight of the helicopter.
Moreover this weight cannot be eliminated during a forced landing – a
touchdown that could easily damage the belly tank. Additionally, many
helicopters allow higher gross weight operation with slung loads
meaning pilots can carry more fire suppressant with a bucket.

The
Bambi Bucket is electrically operated and can be installed on a
standard fifteen amp circuit breaker. Belly tanks require the same 28
VDC power supply but draw 90-125 amps of current and therefore have
more complex installation requirements for power.

The Bambi
Bucket can be folded up and placed in its carrying bag in a few minutes
and stowed in the helicopter whereas the belly tank requires a
considerable time for a mechanic to remove and stow it in the hangar.
During operations in the field, the belly tank hanging under the
helicopter significantly reduces ground clearance and requires that the
helicopter be mounted on high skid gear to minimize the risk of damage.
With the doors open for inspection and maintenance, a belly tank has
only a few inches of ground clearance. Conversely, the Bambi Bucket is
designed to be lifted via the suspension cables directly from the
ground.

The belly tank is considerably more complex with three
opening doors, an electrically driven hydraulic pump, hydraulic
reservoir and an additional hose and pump system of approximately 2 hp
that draws water up the filling hose to replenish the belly tank.

Operational Considerations
A
USA manufactured belly tank refill pump is capable of a maximum flow
rate of 270- 300 U.S. GPM thereby requiring a fill time of 55 to 75
seconds. The Bambi Bucket fills in 3-5 seconds. As a result, belly tank
equipped helicopters must hover at high power settings over the water
for longer periods of time than bucket equipped helicopters. This is
more challenging for pilots and perhaps as spray builds up on the
windshield obscuring vision it can also be more dangerous. Of course,
there is also the consideration that lengthy hover times create much
more wear and tear on helicopter dynamic components. The Bambi Bucket
is fast and easy to fill – assuming the pilot is trained on slung loads
and pick-up techniques (not the kind used at the bar after hours…). My
students are taught to fill buckets in less than three seconds.

Because
buckets require a water depth of approximately 3 feet (1 metre) to
completely fill, shallow water sources will result in only partial
bucket loads – without special equipment or piloting techniques.
Because belly tankers use an electric pump on the end of a 10-12 foot
hose they can pump a full load of water from shallower water sources.
(This tank benefit has recently been eclipsed by some buckets which
have a capability of pumping themselves full in only a few inches of
water.)

During fire suppression operations with belly tanks, the
pilot has the option of dropping on two or three different spot fires
by releasing only one door at a time whereas older style Bambi Buckets
were limited to one drop with their large load. The recent introduction
of the new Torrantula Valve equipped Bambi Bucket allows an infinite
multiple drop capability with a pilot activated switch that can open
and close the bucket exit drain over an infinite range.

During
injected foam operations, a minor residue of foam will remain on the
bucket walls when it is dipped into the water source thereby creating a
minor amount of contamination. Although the concentration is extremely
low, some countries are concerned with the possibility of damage to
fish in the reservoirs – especially during an accidental spillage.
Belly tank systems do not dip their tanks into the water so there is
little chance of diluted foam dripping into the water source. As
environmentalists become more active, this could become an issue in
selecting a tank over a bucket.

The evolution of tanks provides
a further benefit, i.e. slightly faster enroute times as the belly
packs are more streamlined than yesteryear and produce less drag than a
bucket. Depending on the distance between the fire and water source,
this faster cruise speed can make up for the long fill time and perhaps
even reduce cycle time over the fast filling buckets.

Belly
tanks can be easier to use for pilots who are not conversant with sling
load flying. Additionally, bucket pilots need to be trained in the
efficient techniques for picking up water with a bucket. Moreover, with
some buckets it is necessary for pilots to adjust airspeed and altitude
to match their load to the burning trees below and these are techniques
that don’t seem to come readily to every pilot. Using incorrect
techniques with a bucket can result in wrapped lines and buckets that
won’t empty or fill. To be sure, these are all due to pilot technique
errors, but they can be avoided with belly tanks.

Some belly
tanks negate the use of the cargo hook and would need to be removed to
carry a slung load as they block access to/or require removal of the
hook. This could impede revenue generation when the helicopter needs to
be re-configured for a slinging task.

A significant benefit for
buckets is their ability to be flown on a long line. This allows access
to confined water sources, places the helicopter farther from flames
and obstacles and avoids the helicopter “fanning the flames” as
sometimes occurs during low and slow drops. In some instances, the
ability to use a long line is the deciding factor to purchase a bucket.

During
B.C. forestry testing the square edged doors of belly tank systems were
found to break up the water or foam mix in an irregular manner.
Unfortunately, the more the load breaks up in the free air-stream due
to factors such as: airspeed, high ambient temperatures and low
relative humidity the greater the evaporation of the load into the
atmosphere. The rounded edges of the Bambi Bucket minimize water
break-up and provide a more effective, concentrated load. Testing also
indicated the bucket drop pattern would be more efficient for fire
suppression activities. It should be noted that tank manufacturers have
been improving their door geometry and this is becoming less of a
consideration.

Durability and Reliability
Buckets (and
there are many types around the world) are generally made from a tough,
durable material that is impervious to most foam chemicals and they can
therefore be dipped into the retardant pits often dug by
forestry/agriculture agencies. Because of their resilient construction,
pilots often drag buckets through tree tops or bushes with no resulting
damage. Belly tank hoses and pumps are not so resilient and are much
more likely to create mechanical problems in the field when they are
subjected to the normal wear and tear of fire suppression operations.
In fact at least one of the belly tank manufacturers recommends an
extensive and expensive spares kit to keep the system serviceable. This
spares kit costs more than a complete Bambi Bucket.

It is
logical that the Bambi Bucket system with nothing more than a simple
solenoid, spring reel and latching mechanism is less prone to failures
than a complex system with high power demands, many moving parts, doors
to seal and fabrication consisting primarily of fragile and frangible
carbon fiber or fiberglass.

Costs
Buckets are less than
10% of the price of the belly tanks. Moreover, the recommended spare
parts package is small, simple and inexpensive compared to the complex
belly tanks’ requirements. With far fewer moving parts the maintenance
demands of the buckets is far less than the belly tankers. Moreover
down time for simple bucket systems will logically be less than belly
tankers and this can have a major effect on generation of revenue
during fire suppression operations.

Conclusions
For many
pilots and operators, the bucket system is a hands down winner.
However, for those operating from shallow water sources, over populated
areas or in a location that forbids traces of foam in the water supply
you will be motivated to consider the more expensive and complex belly
tanks. Shop carefully and consider your needs to select the system that
best suits your current and future requirements.

Editors Note:
Kenneth Armstrong has flown more than 60 helicopter types and for the
past 15 years traveled worldwide training foreign pilots in the art of
aerial fire suppression. He has received numerous awards and medals for
these suppression activities. He is based in Victoria. E-Mail
aviator-horizon@telus.net