When the first turbine helicopter was imported to Canada in 1958, it cost twice as much as the ubiquitous Bell 47G-2 and consumed substantially more fuel. 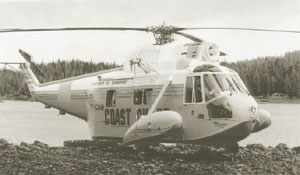 When the first turbine helicopter was imported to Canada in 1958, it
cost twice as much as the ubiquitous Bell 47G-2 and consumed
substantially more fuel. Performance was impressive, but it was not
until the mid-70s that turbine helicopters finally outnumbered piston
models in Canada.

France
took an early lead in introducing the turbine helicopter. The Sud-Est
SE.3130 Alouette II was the first turboshaft helicopter to enter
production; its prototype first flew on March 12, 1955. US fighterjet
maker Republic Aviation in December 1957 agreed to market the Alouette
II in North America. Republic demonstrated the Alouette II to potential
customers in Montreal in August 1958, resulting in a quick sale to
Autair Helicopter Services Ltd., the first commercial operator of a
turbine helicopter in North America.

Compared to piston models,
the four-passenger Alouette had impressive performance. It started
easily in cold weather, cruised at 110 mph, climbed at 1,000 fpm,
carried a 1,000- pound payload, and held the world helicopter altitude
record of 34,000 feet. But CFKMW came to an abrupt end on May 13, 1959
when the helicopter nosed over on takeoff at Labrieville while carrying
Daniel Johnson, Quebec’s minister of hydraulics (and future premier) on
an inspection tour of hydro developments.

The second customer
for a turbine helicopter in Canada was the aviation arm of Ontario
Hydro. Purchase of the $90,000 helicopter was authorized in 1959 to
enhance the utility’s productivity spraying powerline rights of way.
Alouette II CF-JMC arrived at Toronto in June 1959.