he Canadian Business Aviation Association (CBAA) convention and trade show has traditionally presented a platform for fixed-wing manufacturers to showcase their newest, fastest and largest corporate airplanes. But last year’s return of Bell Helicopters and the debut of Eurocopter to the CBAA lineup has signalled an overall shift in thinking about the role of the helicopter as a corporate business tool in Canada. 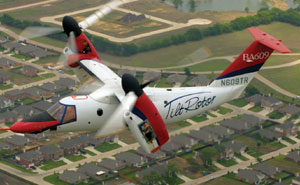 The Canadian Business Aviation Association (CBAA) convention and trade
show has traditionally presented a platform for fixed-wing
manufacturers to showcase their newest, fastest and largest corporate
airplanes. But last year’s return of Bell Helicopters and the debut of
Eurocopter to the CBAA lineup has signalled an overall shift in
thinking about the role of the helicopter as a corporate business tool
in Canada.

“There
is untapped potential in the Canadian marketplace that advances in
helicopter technology are only just starting to open up,” said Tony
Brown, vice-president of sales and customer support for Eurocopter
Canada of Fort Erie, Ontario. Brown pointed to the EC 155 with deicing
and a cockpit suite of flight control and autopilot systems that is on
par with the most sophisticated corporate jets to support his argument.

Ironically,
it is broader acceptance of the business jet as a way to sidestep
airport congestion and deteriorating airline service that has pushed
helicopters further into the corporate spotlight. The helicopter
remains the only piece of technology that can add value to the
corporate jet by leapfrogging over the final layer of ground congestion
between the airport, office, home or even the family cottage on
weekends.

“The person who spends money on a [Bombardier] Global
Express to fly into his corporate base from Europe does not want to
waste another four hours driving from the airport to get home or back
to the office. He wants to get there in less than 30 minutes,” said
Denny Lacroix, director of marketing for Montrealbased Bell Helicopter
Textron Canada. As major cities make themselves more accessible to
helicopters, demand is certain to accelerate.

Approximately 90%
of Canada’s civilian helicopter activity is still utility: hewers of
wood, drawers of water (for forest fires), exploration and seismic. For
manufacturers, the corporate market in Canada represents a
contradiction of sorts. While small in size – a wafer-thin 4% of
registered helicopters – corporate represents real growth in new
aircraft sales. In the last 15 months two charter operators,
Montreal-based Execaire and London Air Services (LAS) of Vancouver,
have decided to add rotors to the fleet.

Execaire, a division of
the Innotech-Execaire Aviation Group, took delivery of a Bell 427 last
October. Based in Toronto, the new aircraft will be used exclusively
for executives needing short-haul flights including shuttle flights
between Pearson International Airport and the neighbouring Buttonville
and Toronto City Centre airports, as well as flights to New York City
and cottage country. “We have seen a growing demand from our clients to
get to and from places quickly and in comfort, where a fixed-wing
aircraft is just not feasible or efficient,” said Jim Morrison,
Execaire vice-president and general manager.

Execaire’s aircraft
is only the second 427 to be sold in Canada. Hamilton-based Jetport
added a Eurocopter EC155 to its fleet in early 2003. LAS president
Wynne Powell caused a buzz at Heli- Expo 2004 in Las Vegas (the world’s
largest helicopter trade show) when he placed an order for a single
Bell/Agusta Aerospace AB139. The AB139 is one of two joint ventures
between the American and Italian helicopter manufacturers, and is the
newest in a line of medium twin-engine helicopters designed to appeal
to a number of markets including emergency medical, oil exploration and
corporate. Powell, who recently bumped the order to two aircraft, said
the AB139 is an important addition to the company’s current fixed-wing
operation, allowing LAS to provide a seamless point-topoint service.

It
is estimated that over the last five years the corporate market has
snapped up 40- 50% of all new helicopters touching down in Canada.
Small wonder that Bell, Eurocopter and manufacturers such as Agusta,
Robinson and Sikorsky (originator of the executive-cabin-class
helicopter) will be zeroing in on Canadian corporate users over the
next five years. Lacroix suggested that statistics can be deceiving.
“Surprisingly, there are a lot of corporate helicopters out there,” he
noted. Lacroix sees one of the biggest sales bumps coming in the
replacement market, “especially among the bulk of executives who
typically like to fly their own machine.”

One such executive is
James Boudreault, the Canadian president of US-based Guardian Glass,
the world’s second-largest supplier of float glass products, with
plants scattered throughout Quebec, southern Ontario and New Brunswick.
A self-described hands-on manager, Boudreault likes to visit all of
Guardian’s manufacturing centres at least once a month and some, such
as the Montreal operation, weekly.

“There is too much ground to
cover to rely on the roads. If it wasn’t for this machine I would
probably have been looking to sell out or find somebody to take my
place years ago,” said Boudreault, who has clocked over 600 hours
flying helicopters since 2001, and spends an average six to seven yours
a week piloting the EC120.

While an hour-plus in the cockpit is
not unusual for Boudreault, the majority of corporate helicopters in
Canada do not travel far – on average about 20 to 30 minutes, or the
equivalent of two to three hours in a car, all things considered.
“Time-wise there is a radius where trans port by car should not make
sense but travel by corporate airplane is not feasible,” explained
Brown. “That is where you are seeing the helicopter beginning to fit.”

To
make certain the helicopter does fit, manufacturers such as Eurocopter
and Bell (including its partner Bell/Agusta) have a family of aircraft
that slot nicely into all corporate requirements. “Range, budget,
twin-engine, are you taking it up to the cottage for the weekend – with
family or without family? There are a lot of guiding factors that will
influence a customer’s decision,” Brown said. “You have to have
something for every market.”

Lacroix said the biggest selling
feature is size, especially in the replacement market. “That is where
I’m seeing the difference. A lot of these people fly the helicopters
themselves, but it’s not just by themselves anymore. They want to fly
up to the cottage with their kids and grandkids.” Boudreault cautioned
against pegging the corporate helicopter as only an executive transport
tool. “We work on three to four days guaranteed delivery,” he pointed
out. “Our product is all customordered so we can’t make it in advance.
If a machine breaks down, we don’t have two days to wait for a part to
be transported from the manufacturer. Better to pick it up and deliver
it by helicopter.”

As positive as the market appears, there are
obstacles including a lack of heliports in major urban centres such as
Toronto and Montreal. Nothing will slow a potential flood of corporate
orders down to a trickle more than the knowledge that local flying
restrictions and an absence of landing pads will chip away at the
biggest selling point of a helicopter, the machine’s versatility.
“There are a lot of corporate customers who can afford a helicopter but
who walk away not because of money, but because of complications in
operating them,” Lacroix said. “If there was a network of heliports, we
would be selling new helicopters by the dozen.” Brown agreed. “Ideally
you would want to see downtown heliports that are well maintained,
licensed and accessible to all. If we had that in Canada, the growth of
corporate helicopters in this country would be huge.”

The debate
has a c h i c k e n – a n d – e g g quality to it. “You need the
heliport to attract the helicopters, but you need the helicopters
before you start to invest in building a heliport,” observed Brian
Jenner, president of the Helicopter Association of Canada (HAC), a
trade organization that shares office space and staff with CBAA.
Further complicating the issue is local resistance to turning patches
of land into local vertical takeoff and landing points. It is a
question of balance, suggested Cliff de Jong, a planner with the city
of Calgary’s Land Use Planning and Policy Division. Since the mid-1970s
Calgary has operated a downtown helipad adjacent to the Bow River, but
without any single dominant user.

“Some accept it as part of the
ambience of living downtown to have helicopters landing nearby, while
others strongly object to the noise,” de Jong said. “We have to balance
the interests of residents and the industries using the helipad.”

As
with fixed-wing, community resistance to helicopters is not necessarily
rooted in fact. The tail rotor of the Eurocopter EC130, for example, is
already optimized for low noise levels in built-up urban centres.
“Technology is allowing us to develop quieter machines that are even
more urban-friendly,” said Brown. “The greater difficulty is
perception.”

Certainly the industry is going to have to do a
better job making its case. “There is a lot you can do to satisfy
communities,” Lacroix insisted. “Fly friendly, set up approaches so as
not to disturb anybody.” Still, there is evidence to suggest that
perception is living off borrowed time as the corporate market buys
into the versatility of the helicopter in increased numbers. The
tipping point could be the Bell/Agusta BA609 Tiltrotor, the first
helicopter to compete directly on fixed-wing’s turf.

The
versatile Tiltrotor is expected to provide operators with twice the
speed and range of conventional helicopters. With its rotors in the
vertical position, the Tiltrotor is able to take off, land and hover
like a traditional helicopter. With the rotors in the horizontal
position, the aircraft is able to fly with the speed and range of a
turboprop fixed-wing airplane. The transition from airplane to
helicopter mode will be approximately 20 seconds.

“The Tiltrotor
will drive the corporate market more than any helicopter that has come
before it,” Lacroix predicted. “People are going to say, ‘I want a
heliport there, make it happen’.

“Even without the Tiltrotor
and infrastructure, the helicopter continues to make its own business
case, according to Boudreault. “Every time I use this machine it
provides a payback.”