Using the world’s largest rotary-wing trade show as its backdrop, DART launched DART Helicopter Services, a new helicopter support company that the industry believes will transform the industry by creating a onestop- shop for all operator’s needs. 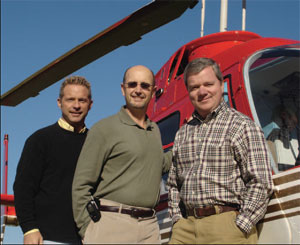 The DART name has been associated with quality IBeam skidtubes for a
long time. But at this year’s Heli- Expo, the Hawkesbury, Ontario-based
company signalled that it wants to be known for a great deal more. And
it is taking a page out of one of North America’s most successful
direct-to-the-home retailers to do so.

Using
the world’s largest rotary-wing trade show as its backdrop, DART
launched DART Helicopter Services, a new helicopter support company
that the industry believes will transform the industry by creating a
onestop- shop for all operator’s needs. Indeed, the catalogue already
suggests that DHS has set its sights on becoming the Lands End of
helicopters parts and service supply.

“This move allows us to
put the sales and marketing expertise of a group of industry
professionals to use for the greater benefit of Dart Aerospace,” said
Bill Beckett, general manager of Dart Aerospace. “This will now allow
us to do what we do best, and that is design and manufacturer
helicopter accessories.”

With product sales and distribution
agreements from parent DART Aerospace, the NORDAM Group’s Transparency
Division, Apical Industries – a leader in emergency flotation systems –
and Heritage Aviation, a company that specializes in interiors and
accessories, DHS has already assembled a well-rounded portfolio to take
to market.

But why the change, and why now? Despite a solid
reputation in the industry DART sensed that it lacked a sales and
marketing focus to grab a larger share of the market. It is a common
concern among firms that manufacturer symbiotic components to DART.

DHS
will be providing packaged systems wherever possible. One example will
be the APICAL raft in bag float system which will now be jointed with
the DART IBeam skidtube. This marriage means that the world’s best
float system will be installed with the world’s most durable skidtube,
according to Apical president Ron Gladnick.

DHS’ first 150-page
catalogue covers a large variety of goods and services. Some of the
items being offered are quite unique such as a complete Bell 47 door
and bubble assembly or a mercury/xenon gas, lowamperage and
cool-running, light known as the Boom Beam. There is also a countless
variety of seating options and interior/exterior accessories. As one
observer commented, “it is like a candy store for helicopter operators
and service providers.”

Not content with only supplying the
industry, DHS will be providing a full menu of completion,
maintenanace, and sales and leasing services. The company is in the
process of buying clean, quality turbine helicoptors, which they will
service and offer or resale or lease in the case of twin
configurations. “Time is always a factor in sales and leasing
agreements,” said Jeff Shapiro, DHS president. “We are not brokers and
can close a transaction within days of our inspection.”

DHS’
home base will be in Bristol, Tennessee. The company is currently
working out of temporary facilities ahead of a new building scheduled
to open this fall. In additional to its US base, DHS has established a
Canadian operation in conjunction with Eagle Copters of Calgary,
Alberta.