The total number of aircraft had risen to 1,940 by the end of last year with 1,414 flown commercially, 460 privately and 60 by ‘states’. The number of operators, depending on how corporate ownership is structured, now ranges from 225 to 250. 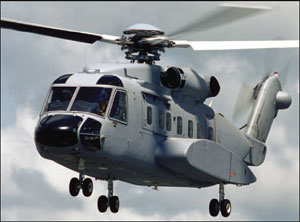 Twenty-five years ago, there were 1,381 helicopters certified in Canada
under the ownership of about two dozen operators. Of those aircraft,
1,125 were flown commercially, 188 were in private hands and 68 were
registered with federal, provincial and municipal ‘state’ operators.
The latter did not include the Department of National Defence (DND)
fleet of Boeing Vertol CH-147 Chinooks for ‘heavy-hooker’ work, Boeing
Vertol CH-113 Labradors for search-andrescue missions, Bell CH-118
Iroquois light transports and Bell CH-136 Kiowa reconnaissance
platforms.

The
total number of aircraft had risen to 1,940 by the end of last year
with 1,414 flown commercially, 460 privately and 60 by ‘states’. The
number of operators, depending on how corporate ownership is
structured, now ranges from 225 to 250. DND’s current fleet is
comprised of AgustaWestland CH-149 Cormorant SAR birds, Bell CH-146
Griffon utility tactical transport helicopters, and Sikorsky CH- 164
Sea King maritime aircraft. The latter are due to be replaced later
this decade by Sikorsky CH-146 Cyclones and the Canadian Forces’
medium-lift capacity is expected to be augmented by more new but as yet
unspecified helicopters by the end of the decade. DND also has about a
dozen Bell 206 JetRangers, CH-139s, which it bought in 1981 for 3
Canadian Forces Flying Training School and which have been on loan to
Bombardier as “government furnished equipment” for primary training
since the operation was privatized.

The intervening quarter
century has seen Canada’s civil and military helicopter operations
experience more ups and downs than the average flying school, thanks to
the vagaries of economic cycles and regulatory changes, government
budgets and the inexorable march of technology. It has taken adroit
management, including corporate restructuring, to bring rotary flight
in this country to what Brian Jenner, president of the Helicopter
Association of Canada, describes as a “state of equilibrium,” which
bodes well for the next 25 years.

“The principal difference
between 1980 and today is that up until the 80s, you had an industry
that had a few major players,” Jenner pointed out in an interview,
recalling how difficult it used to be to get a Transport Canada
operating certificate. “You had to have a Class 4 Charter Licence
and/or a Class 7 Specialty Air Service licence. You had to apply to the
Canadian Transportation Commission (CTC) and the onus was on the
applicant to prove that it was in the public interest to have more
competition.”

That bureaucratically burdensome CTC process
almost invariably led to lengthy public hearings involving lawyers and
other experts, all of which cost the applicants huge amounts of money.
But, as Jenner noted, “once you got a licence, you got into business,
you were protected from competition, you were able to get relatively
big and the number of players was relatively small.” Then along came
what the Liberal government of the day labelled “economic regulatory
reform” which more commonly goes by the rubric of “deregulation” even
though there are more rules today than there were then, mostly having
to do with safety.

The seeds of deregulation had been sown years
earlier as Ottawa saw what was happening in the US, where gradual
deregulation of the air transport sector had begun in 1978. Although
the new Canadian regime didn’t actually begin until January 1987, Lloyd
Axworthy – who was given the Transport portfolio in August 1983 by
Prime Minister Pierre Trudeau – told the CTC in 1984 that it should
take a more “deregulated” approach to its industry oversight.

Axworthy
made it abundantly clear that he did not consider the CTC to have
exclusive jurisdiction over the question of whether it should be easier
for companies to get into the business. When the Liberals were swept
from office by Brian Mulroney and his Progressive Conservative
juggernaut a few months later, Axworthy’s successor, Don Mazankowski,
made it clear that deregulation would continue.

“So from 1984
on, it became pretty easy to get a licence,” Jenner said. “And since
1987, all you have to do is ask and you shall receive. So you have an
industry today that’s characterized by a very large number of small
operators.” Despite mergers and buyouts that have created a handful of
major operators, the industry is far from dominated by them and
provides work for the scores of smaller ones with anything from one to
half a dozen ships. “The very big players have the advantage of
economies of scale,” Jenner acknowledged. “It’s easier for them to get
money; it’s easier to find $50 million than it is to find $1 million.
But the small companies have the advantage of flexibility; they’re like
turtles, they can pull in their arms and legs and necks when times are
tough, and they can survive.”

In the first few post-deregulatory
years, the late 1980s and early 1990s, some of the larger operators
speculated (hoped?) that some of the smaller ones would disappear. Some
have, but so have some medium-to-large operators. On the whole,
however, smaller operators not only have thrived, they also have
multiplied. And, said Jenner, their inherent advantages mean that they
will continue to thrive in the kind of competitive environment the
federal government envisaged when it embarked on deregulation.

“Being
small . . . isn’t enough of an advantage to eliminate the big players
but the big players don’t have enough advantage in their economies of
scale to eliminate the little players either,” Jenner said. That’s his
“state of equilibrium.” Smaller operators can offer highly personalized
service either geographically or as a specialty such as heli-skiing,
seismic work, pipeline patrol, etc. “Because they’re good at what they
do – whatever the specialty – they’re able to make a good living and
they’re able to survive the tough times.” As for the majors, they
survive because they generally are well-financed and can offer a broad
array of services.

That’s not to suggest that it has all been
smooth flying. The first post-deregulation nosedive occurred in 1992-
93 as global recessionary forces had a major impact. Then there was the
major insurance rate escalation about a decade later. However, despite
a lot of dire predictions, most Canadian operators survived — more
evidence of equilibrium. “Unless there’s some major change in the
marketplace or in the regulatory framework, the system will probably
continue in that kind of state of equilibrium for the next 20-25
years,” Jenner predicted…