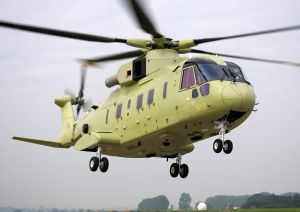 “We’re seeing real progress and execution on this program,” said U.S. Navy VH-71 program manager Capt. Donald Gaddis. “With agreement on the way forward and a more realistic schedule, we can build on the momentum we have generated as we deliver the increment one helicopters to the Marine Corps and White House and move into the increment two phase.”

“The maiden flight of PP-1 is a tremendous accomplishment for the VH-71 program — as expected it performed exceptionally during its 40-minute flight,” said Stephen C. Moss, CEO of AgustaWestland North America. “It is a great honor to design and build the next presidential helicopter and I look forward to adding it to the U.S. Department of Defense inventory.”

“Every aircraft that flies brings us a step closer to fielding helicopters that will serve the office of the president,” said Jeff Bantle, Lockheed Martin vice president and general manager of the VH-71 program. “We’ve got systems integration laboratories online, helicopters in flight test and more in production for final command and control systems integration. It’s crucial now for us to leverage what we've accomplished in the last few years and charge ahead to complete this phase and continue into the next phase.”

PP-1 is the first of five VH-71 production aircraft that will complete the initial phase, or increment one, of the presidential helicopter replacement program, designed to meet an urgent need for new helicopters.

Increment two will provide 23 operational helicopters with increased range and upgraded navigation and communications systems that fulfill White House requirements to maintain continuity of government and allow the president to carry out the duties of the office. Some of the current presidential helicopters have been flying since the 1970s, and are scheduled to begin phasing out of operational service at a rate of three per year beginning in 2017.

Lockheed Martin Systems Integration-Owego is the prime contractor and systems integrator for the VH-71 program with overall responsibility for the program and aircraft system. AgustaWestland, the principal subcontractor to Lockheed Martin, has responsibility for the basic air vehicle design, production build, and basic air vehicle support functions. More than 200 suppliers in 41 states support the VH-71 program.

Headquartered in Bethesda, MD, Lockheed Martin is a global security company that employs about 140,000 people worldwide and is principally engaged in the research, design, development, manufacture, integration and sustainment of advanced technology systems, products and services. The corporation reported 2007 sales of $41.9 billion