“Flight training is probably following along on the coat tails of so many positive helicopter industry indicators." 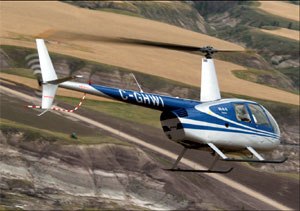 Flight training schools have taken it on the chin recently. While some
have struggled to attract students and others have grounded their
operations entirely, all have watched margins being squeezed by
insurance premiums and higher gasoline prices. Insurance premiums are
still too high and fuel remains volatile. Even so there are encouraging
signs that the industry is bouncing back.

“Flight
training is probably following along on the coat tails of so many
positive helicopter industry indicators. On top of the general positive
situation flying schools will have to compensate for the disappearance
of a whole bunch of pilots from my generation, who are coming up for
retirement,” said Brian Jenner president of the Helicopters Association
of Canada (HAC).

As we celebrate our 25th anniversary, this
issue of HELICOPTERS gives us a unique opportunity to expand our focus
beyond this past year, and look at some of the broader changes in the
flight training industry over the years.

“Steady as she goes,”
said John Montgomery of Professional Flight Centre’s IFR helicopter
training program. Montgomery, well known in fixed-wing circles, is
co-owner of the helicopter school at British Columbia’s Boundary Bay
Airport. “Steady” would in fact be the best description of the past
year for most helicopter training programs as the industry maintained
operations with few major changes.

Professional Flight Centre
(Pro) did have one significant change this past year. With the
unexpected departure of several people from the helicopter school in
the fall of 2004, Montgomery was faced with the choice of either
discontinuing the helicopter program or finding a new CFI to fill the
position suddenly left vacant. At the same time that he was looking for
a new CFI, he also felt it was important to improve the quality of
service offered to students.

“We’ve got (the school) right where
we want it,” said Montgomery. Considering where things were with Pro’s
program just a few months ago, he is visibly pleased with its current
operation, and especially with the new CFI, Keith McMillan.

McMillan,
a veteran instructor whose teaching days started in 1975, was actually
the first person Montgomery wanted to hire in 2000 when Pro expanded
its multi-engine fixed-wing IFR program to include specialized IFR
helicopter training.

With one full-time and three part-time
helicopter instructors available, Montgomery has no plans to add
further staff or aircraft beyond Pro’s one IFRequipped Robinson R22. It
also has access to a Bell 206 JetRanger for turbine time as required.
To supplement the IFR-equipped Robinson, Pro has an IFR-equipped Cessna
172 and IFR simulators that enable Pro to offer a full range of
services for both VFR and IFR multiengine fixed-wing and helicopter
training.

Pro’s effort to find a new CFI wasn’t an isolated
case. Maureen McGraw of London, Ontario’s Modak Aviation had a similar
problem. “We looked all around, there was nobody,” said McGraw. But,
like Montgomery, she is extremely happy with Modak’s new CFI, Harald
Sydness, who was eventually found in Norway.

Looking around
Eastern Canada, McGraw said there are a lot of schools that aren’t very
busy. But she’s pleased at how busy Modak has been this season. “With
the way prices for instruction have been lately,” she said, “we didn’t
expect to be as busy as we are.”

Bighorn Helicopters Flight
School at Springbank Airport, Calgary, doesn’t have a problem finding
Class One instructors. In fact, it has four – three of them full-time.
But Bighorn owner Paul Bergeron had a different problem this past year:
insurance rates. This is a big problem for the industry, but what most
operators didn’t get was a belated increase in their premiums. Bergeron
was blindsided by a 24% increase in his hull insurance – given by his
broker only AFTER the premium was due.

Out with the old, in with
the new! Bergeron hired a different insurance broker, and is more than
willing to explain to anyone who asks, the reasons behind the change,
and who he now uses for his coverage and who he does not!

Primarily
a flight-training operation, Bighorn also offers charter and tour
services which are staffed exclusively by graduates of its program.
Bergeron, who has been in the helicopter industry for 25 years, is
seeing more pilots once again getting jobs in a piston helicopter, as
was the case 25 years ago. In the intervening years, more work has been
in turbine aircraft, which has made getting that first job difficult.

Keith
McMillan of Pro made a similar observation. With the Robinson R22 and
R44 being used more frequently in commercial operations, more low-time
pilots are once again finding piston work, he said. Bergeron added that
“before the R22 and R44 became popular, it was hard to get experience.”

Industry-wide,
most schools do in fact try to offer their graduates some form of
experience at an in-house commercial operation, if they have one. This
gives their students real-world work experience.

One of many
schools that does not have a commercial operation for its graduates is
Rotorworks, in Whitecourt, Alberta. Jim Hofland, owner of Rotorworks,
said he works with industry contacts to get placements for his
graduates. He estimated a 70% average for their getting work in the
industry, with the most recent class having attained an 80% placement
rate. Hofland said his pre-existing relationships in the industry help
him to find work for his graduates. Also, the students he’s been
getting have been excellent.

Pro’s McMillan added that the past
25 years have seen several improvements in the industry that help new
pilots. He said the material and types of training available weren’t as
good back then as they are today. “The quality of schools is better,
and the quality of the training is better.”…