A between-flights reverie over a hotdog recently gave me cause for laughter after considering approaches I have witnessed in 38 years of flingwing operations.

A between-flights reverie over a hotdog recently gave me cause for
laughter after considering approaches I have witnessed in 38 years of
flingwing operations. The first giggles were at my own expense. After
basic military training on the ubiquitous Hiller 12 Nomad this neophyte
was sent to fly the Armed Forces Boeing Vertol 107s, aka the CH-113A
Voyageur or Labrador in Canada and CH-46 in the US. 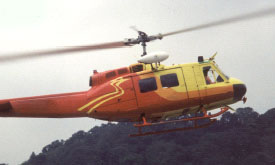 THE KAMIKAZE TECHNIQUE
As
a junior copilot with 55 hours of very conservative rotary-wing
operations behind me, I was awed by my instructor’s version of a normal
approach. In 450 Sqn it was described by our peers as the “hairy-assed
flare technique.” For a helicopter that grossed over 20,000 pounds and
was handicapped by a flailing, fully articulated rotor head, this
approach style was judged by many as an absurdly aggressive technique.
In the civilian industry this procedure is seldom employed for many
reasons – unless the helicopter flies a safe distance from terra very
firma on the end of a long line.

However, my instructor was a
‘high time’ pilot and commanded my respect – actually, he was of the
Army persuasion and he demanded my respect. Sorry to say, he is no
longer with us as his karma was apparently to challenge a hydro wire
with a training helicopter – the wire won. So, to be fair to his memory
and truth to tell, I saw the merit in his method. The captain’s
technique was to maintain the single-engine safety speed of 60 knots as
long as possible and then to virtually dump the collective and flare
near the touchdown spot with a final pull of power to stabilize the
landing. Another name for this approach would be an autorotation – with
minimal power … and a power recovery.

During fire-suppression
operations one of our squadron members using this type of approach
stabilized some northern tundra by pounding it down when the flare and
power application wasn’t enough to arrest the descent rate. Air Force
jet pilots would likely have observed that this captain was a
frustrated fighter pilot. Since my training employed this approach, I
continued with this procedure into the start of the seventies when I
graduated to civilian flying. I should mention that in the late sixties
terms like Vortex Ring State (VRS), Settling With Power (SWP) and Loss
of Tailrotor Effectiveness (LTE) were not part of our squadron’s
vocabulary – besides, the twin-rotor Vertols had no tailrotor! Some of
my approaches in the early seventies in Alouettes and JetRangers were
of considerable entertainment value as these newfangled Aerodynamic
Traps made their presence known. Were things better when we didn’t know
what caused the wild gyrations? Just kidding.

At any rate, the
kamikaze approach provided a wide variety of situations to teach myself
recovery from VRS, SWP and LTE. My salvation arrived when I taught
myself mountain flying. This occurred when a helicopter company sent me
off on a summer contract in the mountains without benefit of training.
(Things were different in the early seventies and our accident rate of
one helicopter lost yearly out of six testified to the need for
improved training standards.) With the benefit of a mountain session in
the Alouette II POH, I learned the rotor disk should be loaded at all
times. Subsequently that technique was tried and then adopted for a
lifetime as mandatory for the final stages of landing. Not
surprisingly, the all too frequent twitches and wild gyrations on short
final disappeared….

RIP VAN WINKLE ON FINAL
During that
same year I had the opportunity to watch the company chief pilot and
others making numerous approaches during group operations in fire
camps. It was obvious the chief was paid by the flight hour as he
logged a lot of time on final approach. I often wondered if he had
dozed off, since we worked very long hours. Also, all of his approaches
were quite steep. In the single-engine helicopters we were flying this
was akin to thumbing one’s nose at the Height/Velocity Curve. (The
Alouettes had the autorotative characteristics of a greased crowbar
when compared to the newly-introduced JetRangers.)

Many would
argue that the extreme reliability of turbines allows pilots to
transgress the ‘avoid’ areas of the H/V curve with these slower
approaches. However, the living unfortunates who were flying choppers
during accidents would disagree. And they have the injuries and losses
to prove their claim.