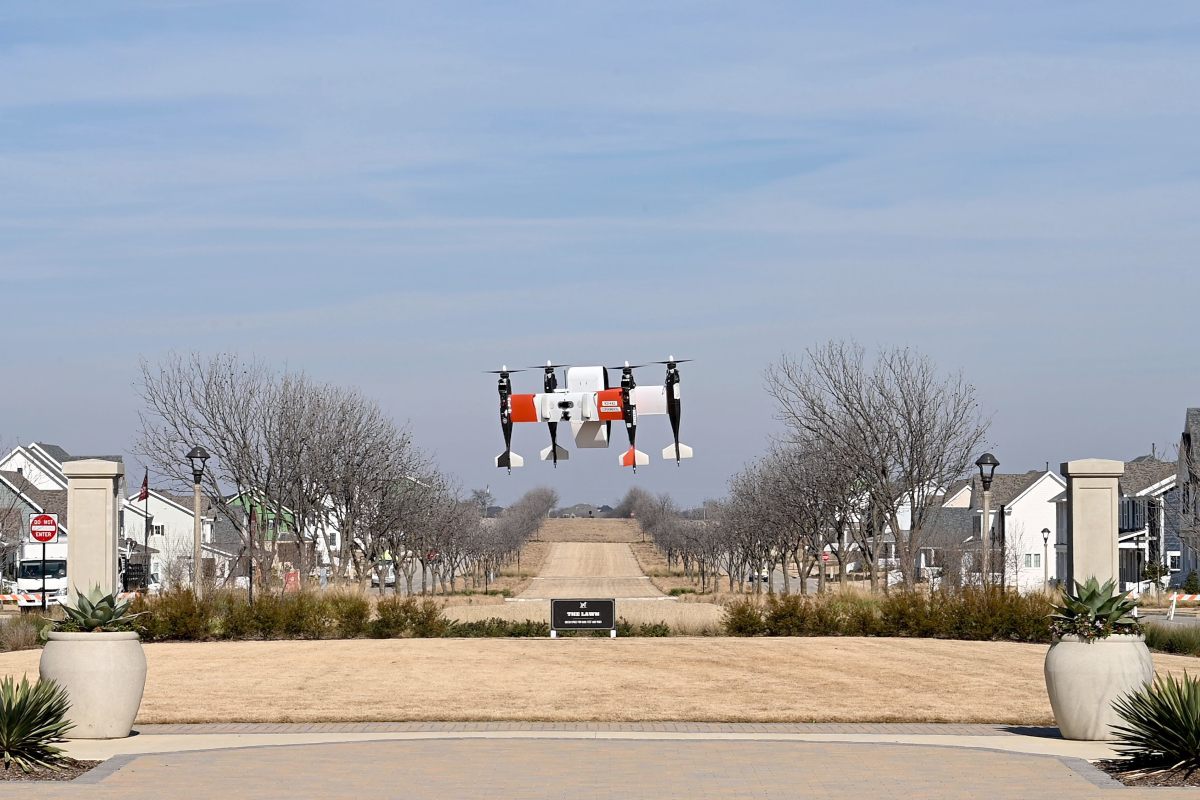 The Bell Autonomous Pod Transport (APT) flew across the Mobility Innovation Zone (MIZ) and delivered a package to a landing area, demonstrating its future commercial capabilities.

Launching from the MIZ Flight Test Center, flying in complex airspace and landing in Pecan Square, Hillwood Communities’ tech-forward, master-planned community in Northlake, Texas, the APT, which is designed to be capable of various missions from package delivery to critical medical transport and disaster relief, flew a preprogrammed four-mile route through the MIZ.

“This successful test of Bell’s APT at the Alliance Texas Mobility Innovation Zone highlights the potential for UAS to complete complex missions, moving the needle closer to connecting logistics operations directly to consumers,” said Ross Perot, Jr., chairman of Hillwood, in a statement. “Together, we are carving a path forward for future commercial operations to solve the supply chain challenges our world currently faces.”

Taking off on its voyage, the APT initiated a vertical takeoff and then rotated to fly on its wing, explains Bell, becoming nearly silent to the ground below. The APT reached a maximum altitude of 300 feet above ground level. Its route included flying near I-35W and miles of unpopulated fields as the aircraft transitioned in and out of Class D and Class G airspace, demonstrating the types of airspace the APT could encounter during a commercial flight and the unique diversity of airspace within the MIZ.

Bell is developing the APT to reach speeds of more than 100 miles per hour, with  a baseline payload capability of 70 pounds. It recently demonstrated carrying payloads over 100 pounds. Bell states its APT systems allow for flexible mission capabilities while keeping operations simple, efficient and fast. It is capable of twice the speed and range of a conventional multirotor, according to Bell, and the vehicle is designed for rapid deployment, quick reconfiguration, and nimble battery swap and recharge.

Data collected during the demonstration will be used to support future standards development and Federal Aviation Administration (FAA) certification guidelines.

Bell and Hillwood have joined forces with the Tarrant Regional Transportation Coalition (TRTC), a public-private partnership focused on advancing mobility innovation within the western portion of North Texas, to create a regional ecosystem supported by leaders in government and the private sector. Several of the region’s mayors and civic officials were on-hand for the APT flight.

“Our region is uniquely positioned to support companies engaged in the commercialization of new technologies in air mobility,” said Jeff Williams, mayor of Arlington, Texas, and chairman of the TRTC, in the same statement. “We’re proud to support Bell and Hillwood in launching North Texas’ first point-to-point package delivery at the MIZ and look forward to their continued leadership in making our region an epicenter for mobility innovation.”