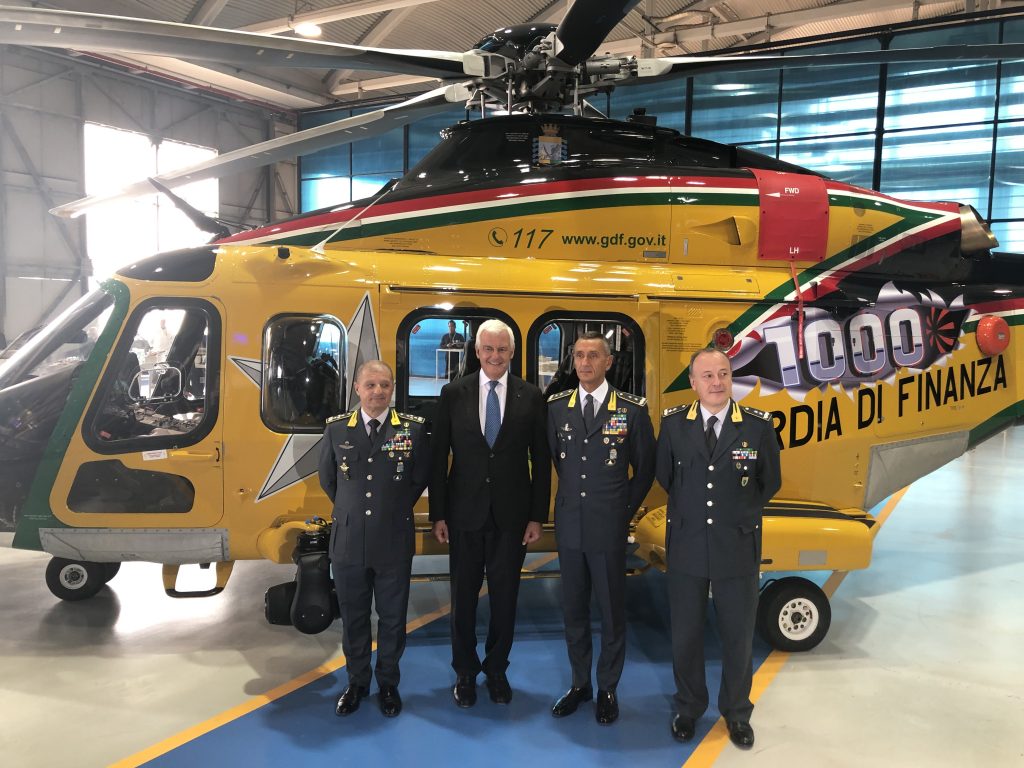 With 280 operators in 70 different countries to date, the 1,000th AW139 is delivered to Italy’s Guardia di Finanza. (Photo: Leonardo)

Leonardo on September 20 delivered its 1,000th AW139 helicopter to Italy’s Guardia di Finanza during a ceremony at the aircraft manufacturer’s plant in Vergiate, Italy. Leonardo describes the AW139 as the most important helicopter program in the last 15 years at an international level, as it sets a production record in the Italian aviation industry. The AW139 is the forefather of a helicopter family comprising of the smaller and lighter AW169 and the larger and heavier AW189.

The AW139’s first flight dates back to early 2001. The helicopter now has orders of more than 1,100 units from more than 280 customers in over 70 countries on all continents. The aircraft has almost 2.5 million flight hours recorded since the first delivery took place at the beginning of 2004.

In terms of mission versatility, the AW139 today is used at a level greater than 30 per cent for public utility tasks like search and rescue and air ambulance, law enforcement, firefighting, and disaster relief; over 30 per cent for offshore transport; around 20 per cent for military tasks; and the remainder usage is seen in VIP, institutional and corporate transport missions.

“What we celebrate today is much more than the success of a product or of a company. It is the global affirmation of an asset of our entire country,” said Alessandro Profumo, CEO, Leonardo. “Thanks to the commitment, knowledge and professional skills present at Leonardo and to our products, like the AW139, our host of technologies and history of flight innovation – these all form important pillars of our industrial capabilities.

“The AW139 is a striking example of the role that Leonardo plays and intends to continue to have in the world,” continued Profumo. “All our values are reflected in the AW139: continuous innovation, internationalization, proximity to the market and to the customer, and the enhancement of human resources.”

The AW139 fleet has a global presence: around 30 per cent in Europe, almost as much in Asia and Australasia, 15 per cent in the American continent, followed by the Middle East. Leonardo also explains the AW139 has grown significantly in just a few years, including an increase in the maximum take-off weight from 6.4 to 7 tons. Almost 1,000 mission kits and equipment have been certified for the AW139.

With protection systems against icing, the AW139 can fly in all weather conditions. Leonardo states this model is also the only one in the world capable of continuing to fly for more than 60 minutes without oil in the transmission, twice as much as the 30 minutes set by the certification authorities.