Leonardo Helicopters has announced the decision by the Norwegian Police Directorate to choose the AW169 as their new law enforcement helicopter following a tender for their helicopter service modernization program. The contract, expected to be signed in August 2017, will include three aircraft, with an option for a further three units, and a 10 year maintenance package. 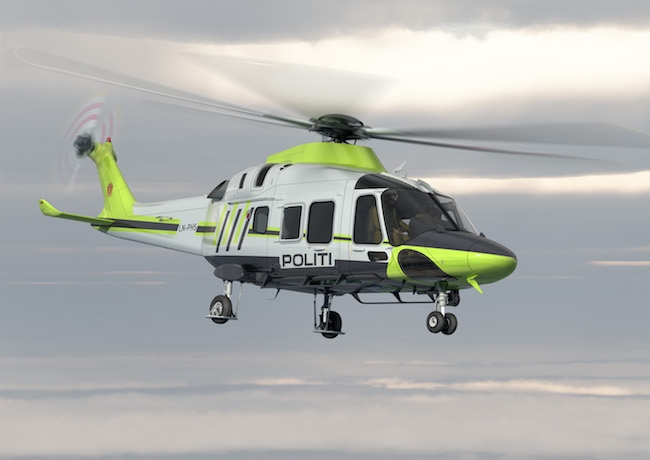 The new aircraft will enable the Norwegian Police to enhance their capabilities and readiness to counter various threats such as terrorism and other crimes, delivering greater range than the current helicopters in service and rapid response over shorter ranges from other bases when necessary.

The AW169s will perform a range of tasks including observation, surveillance, special operations team transport and airborne sniping, ensuring high versatility with quick and easy reconfiguration between roles. The specific layout of the Norwegian Police’s helicopters will allow the transport of six people plus crew.

A versatile, new generation twin-engine light intermediate category helicopter, the 4.8 tonne AW169 has been designed in response to the growing market demand for an aircraft that delivers high performance, meets all the latest safety standards and has multi-role capabilities.

The AW169 incorporates several new technology features in the rotor system, engines, avionics, transmission and electric power generation and distribution systems. More than 30 AW169s have been delivered to date to customers in Europe, Middle East, Asia, Australia, and South America.

Some 160 agreements, including orders and options, have been signed by almost 70 customers in approximately 30 nations worldwide to date for a number of roles such as law enforcement, emergency medical service, offshore transport, executive/private transport, utility and electronic news gathering In Scandinavia the AW169 has already proven itself very successful in emergency medical service and harbour pilot shuttle/offshore transport roles.