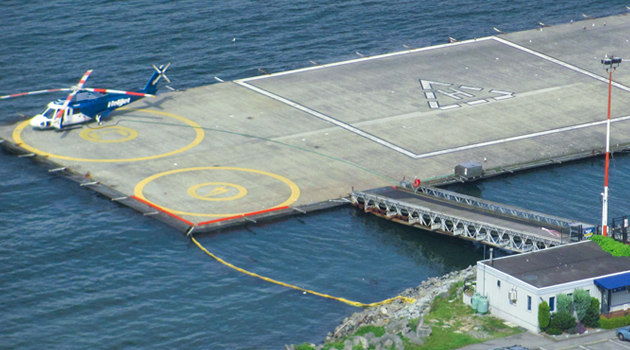 The Vancouver Harbour Heliport, located on the city’s downtown waterfront and operated by Pacific Heliport Services Ltd., has been granted $1.3 million in funding from the Province of British Columbia’s B.C. Air Access Program. Earmarked for airside improvements at the heliport, the funding is subject to customary negotiation and contractual execution.

Pacific Heliport Services (PHS) explains, that each year, the B.C. Air Access program announces grants that fund up to 75 per cent of the cost for approved airport infrastructure upgrades to maximize safety and convenience for the travelling public.

The grant provided to PHS will be used for several improvements to the facility located on Waterfront Road next to the Vancouver SeaBus terminal. PHS is a wholly owned subsidiary of Helijet International.

The airside and core infrastructure improvements will include new ramp and bridge structures to the floating heliport. Upgraded dual fuel dispensing systems will also be fitted, according to PHS, along with permanent containment booms and fences in-between the heliport and shoreline to collect debris. The total project is valued at an estimated $1.7 million, with PHS intending to fund the balance of the project.

“After more than three decades of service, it’s time to revitalize the heliport’s infrastructure to enable its continued safe and efficient operation. This support from the province will help us renew one of the busiest aerodromes in the Province,” said Aleks Powell, general manager for PHS. “Vancouver’s waterfront heliport plays a vital role in facilitating government business travel, private sector commerce, tourism and emergency life-saving medical services and serves as a significant generator of economic benefits.”

In 2018, 15 different helicopter air operators completed more than 14,000 passenger flights at the heliport – 90 per cent of the flights were for business purposes.

A total of 228 of the landings were performed by dedicated BC Ambulance Service helicopters, which use the heliport to transport patients to and from health facilities in the Lower Mainland.

The Vancouver Harbour Heliport, explains PHS, has operated without incident or accident throughout its 33-year history. The company continues to expain the heliport generates more than $40 million in direct and indirect annual economic benefit annually and contributes more than $2 million in government tax revenues. Ongoing operations also generate more than 70 direct person years of employment and nearly $5 million in direct wages each year.