“After eight days over the crash site, we achieved what we set out to accomplish.” 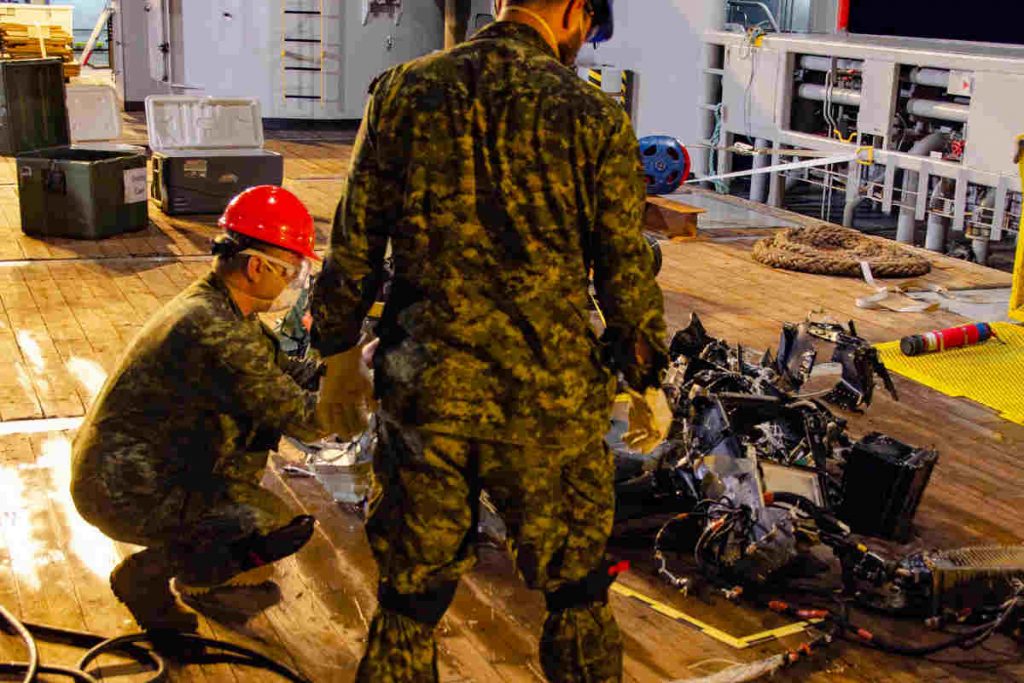 Canadian military members onboard the EDT Hercules examine CH-148 Cyclone parts recovered from the Mediterranean Sea, at a depth of 3,143 metres and across a 260 by 230-metre debris field. (Photo: Cdr Robert Watt, Canadian Armed Forces)

Rear-Admiral Craig Baines of the Royal Canadian Navy at a news conference yesterday announced a decision was made to conclude the recovery operation of the Canadian Armed Forces CH-148 Cyclone and four fallen military members. The Cyclone helicopter, operated as Stalker 22 by the Royal Canadian Air Force’s 423 Maritime Helicopter Squadron, crashed into the Ionian Sea – an elongated bay of the Mediterranean Sea – on April 29.

Remains of two of the six fallen Canadian Armed Forces (CAF) military members were recovered before a joint mission with the United States Navy (USN) was launched to locate the lost helicopter and military members. The USN support ship EDT Hercules on May 25 departed Souda Bay in Greece with the approximate location of the Cyclone known. Crew members onboard Canada’s HMCS Fredericton frigate, on which Stalker 22 was deployed, witnessed the crash from the deck of the ship as they were preparing to receive the helicopter.

The Cyclone went down in an area of the Ionian Sea with depths exceeding 3,000 metres, which required CAF to enlist the USN and its Remora III remotely-operated vehicle (ROV) to help with recovery operations. Baines led the operation as Commander Maritime Forces Atlantic. Parts of helicopter’s fuselage and remains were first found in the evening of May 26.

“After eight days over the crash site, we achieved what we set out to accomplish,” Baines said in his Wednesday statement. “We located the helicopter, we have recovered some remains of our fallen and we have retrieved multiple pieces of the aircraft that will assist in the ongoing flight safety investigation.”

Baines emphasized that while the CAF-USN operation was able to recover the remains of some of CAF’s fallen military members, those remains have not yet been identified and it is, therefore, unknown if all of the remains of all four missing military members have been found. It was expected that the remains found would be brought back to Toronto as early as this weekend for identification.

Launched at 7:00 pm Atlantic time on May 26, the Remora ROV descended for approximately three hours before reaching the ocean floor at 3,143 metres. Then, within eight minutes, its sonar and cameras revealed a large portion of the helicopter fuselage, which became the centre point for the rest of the search.

The debris field spanned approximately 260 by 230 metres with aircraft components found several clustered groups, with many smaller pieces scattered individually across the ocean floor. “Unfortunately, no portion of the main cabin was left intact following the crash, including the external cockpit structure,” stated Baines. “The largest piece at the wreckage site was the rear deck/ramp area of the helicopter and the next largest intact piece was the tail pylon and tail rotor blades.”

Baines continued to explain, that given the challenges associated with a recovery at this depth, the decision was made to recover all discovered remains and only pieces of equipment that would be useful to the investigation. During a question period with reporters, he explained, that in addition to retrieving remains of the fallen, the operation hoped to find avionics components that would help in the crash investigation.

Both the he cockpit voice recorder and flight data recorder from the CH-148 were previously recovered. Baines stated the recovery team could not provide any additional information about the individual pieces that were recovered given the current flight investigation.

Baines then thanked the United States Navy, as well as the Captain and crew of the EDT Hercules, which served as the platform for the search and recovery mission. “On behalf of the Royal Canadian Navy, Royal Canadian Air Force, and the families of our fallen I would like to thank them for all they have done to help us bring our shipmates home,” he said. “In closing, and speaking more directly to the families of our fallen, it is our hope that this operation provides some closure to you. Please know that the Canadian military family grieves with you.”