Sikorsky has presented Bristow Helicopters Limited with the Sikorsky Winged-S Rescue Award in recognition of a recent life-saving mission in the North Atlantic. The award was accepted during the 2017 Defence and Security Equipment International exhibition. 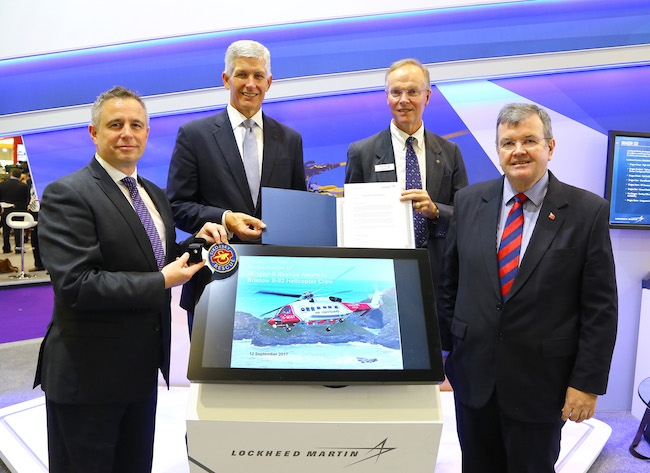 In May 2017, a Bristow crew operating an S-92 helicopter out of the HM Coastguard Prestwick SAR base rescued 22-year-old Matthew Bryce who was stranded at sea for 32 hours. Bryce ventured out from the west coast of Scotland to enjoy a day of surfing on a Sunday morning, later causing concern to his family when he did not return. Authorities were alerted the following day, and after an extensive multi-agency air and sea search lasting several hours, Bryce was found by the crew of the Prestwick S-92, call sign “Rescue 999” drifting off the coast of Northern Ireland. During a mission lasting over six hours, the crew of Rescue 999 hoisted Bryce from the sea that Monday evening. He was safely transported to a Belfast hospital and later recovered.

The Prestwick SAR base is one of the busiest in the UK. The latest UK SAR helicopter statistics issued by the UK Department for Transport (DfT) show that in the latest quarter, April to June 2017, the Prestwick base was the third busiest base, responding to 79 taskings, and carrying out the second highest number of land taskings, with many in or near Loch Lomond and the Trossachs National Park.

“We have been successfully operating S-92 helicopters for more than ten years. The high reliability of our S-92 helicopter fleet throughout that time has been absolutely critical to our time-sensitive mission,” said Damien Oliver, Assistant Director, UK MCA Aviation.

“Bristow is proud to operate the S-92 helicopter to fulfill the UK Maritime and Coastguard Agency’s mission to save lives, and our team is honored to receive this recognition,” said Neil Ebberson, Project Manager, Bristow UK Search and Rescue. “Sikorsky’s legacy in lifesaving, coupled with the latest technology of the S-92 helicopter, provides an outstanding solution for the high operational demands of our SAR business.”

Beginning in 1950, the Winged-S Rescue Award Program honors those who perform rescues flying a Sikorsky helicopter. Through this award, Sikorsky acknowledges the humanitarian efforts of pilots and crewmembers who put themselves in harm’s way to save others, fulfilling Igor Sikorsky’s vision of the helicopter.