Although Sikorsky’s fly-by-wire X2 Technology was unveiled only last June, preliminary design was already complete and parts fabrication had begun for an X2 Technology Demonstrator (X2TD) that the company plans to fly at its Schweizer Aircraft subsidiary this year. 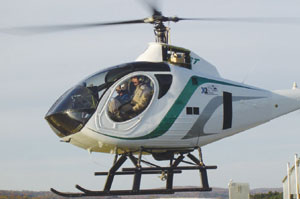 A new initiative by Sikorsky Aircraft Corporation evokes the pioneering
efforts by the company’s founder nearly a century ago and is expected
to yield a significant breakthrough: production helicopters capable of
sustaining at least 250 knots in level flight. That would compare with
the 150-170 knots possible with most other helicopters even today.

Although
Sikorsky’s fly-by-wire X2 Technology was unveiled only last June,
preliminary design was already complete and parts fabrication had begun
for an X2 Technology Demonstrator (X2TD) that the company plans to fly
at its Schweizer Aircraft subsidiary this year. It will feature
closely-stacked counter-rotating coaxial main rotors with a lowdrag
profile, augmented by a pusher propellor, all powered by a
Honeywell/Rolls-Royce LHTEC T800-LHT-801 turboshaft.

Development of an X-2 fleet will be as much
evolution as revolution. A Schweizer 333 surrogate first flown in early
November at the main Schweizer plant in Elmira, NY, is being used for
initial testing of the triply-redundant system. Also, while FBW
technology could concentrate the cyclic, collective and pedals on a
single side-arm controller (SAC), the X2TD will feature a conventional
collective stick, an SAC cyclic, and pedals for yaw control. It will be
able to incorporate the latter into the SAC but initial flights will
employ the pedals until pilots are A comfortable with having the
unusual yaw control capability. Yaw is induced in a coaxial-rotor
helicopter by increasing blade pitch in one rotor and decreasing it in
the other, resulting in a differential torque which could be augmented
by a rudder at higher speeds.

“We’ll be flying people that are
not necessarily familiar with the side-arm control and fly-bywire,”
explained Mark Hammond, program manager for the X2 Technology at
Sikorky’s headquarters in Stratford, Connecticut. “I’d like to
emphasize that the aircraft is just a demonstrator, not a product.”

Peter Grant, program manager for Sikorsky
Advanced Programs, added that final configuration would evolve as
Sikorsky’s test pilots put time on the X2TD. “As Mark suggested, you
balance what you need to control the aircraft with how comfortable the
pilots who are actually flying it are.” He pointed out that when the
General Dynamics F-16 Falcon arrived on the scene, it had an SAC that
went through “some significant evolution – not so much from an
engineering perspective of how those controls are translated to the
fly-by-wire system, but from an ergonomic perspective that made it
comfortable for pilots.”

Sikorsky foresees X2 Technology being
used in all weight classes. The sleek X2TD should top out at about
6,000 pounds but Sikorsky has two US Army Applied Aviation Technology
Directorate (AATD) contracts for conceptual design of heavy-lifters.
One would be a super-heavy-lift coaxial platform with a cruising speed
of 165 knots, the other a high-speed super-heavy-lift configuration
capable of cruising at 245 knots. The AATD foresees no fewer than eight
variations of the latter to identify the impact of changes in payload,
range, environmental conditions and shipboard compatibility on aircraft
size, performance, operational suitability, cost, schedule and
development risk.

Major design differences in X2 aircraft
include the rotor blades and hubs. The high-speed configuration will
use a rigid advanced composites rotor but the blade profile is
different from what is found in a conventional helicopter. Sikorsky
isn’t saying much beyond that until it rolls out the X2TD. “What we
learn with the Demonstrator will help us to design this technology into
other aircraft,” Grant said. “What does that mean for conventional
helicopters? Our backlog of conventional helicopters today speaks
volumes about the long-term viability of singlemain- rotor helicopters,
but X2 Technology provides or satisfies a new desire for some
customers.”

Comparisons may be invidious but they’re
unavoidable. How would X2 aircraft stack up against the 250-knot Bell
Boeing V-22 Osprey tiltrotor? Customers evidently want more flexibility
and speed from their helicopters and if hover efficiency is a metric
for comparison, Grant said matter-of-factly that Sikorsky’s
next-generation aircraft will be “much more” efficient than a
tiltrotor. At the other end of this spectrum is the Lockheed-Martin
F-35 Joint Strike Fighter, a short takeoff/vertical landing variant of
which has been chosen by the US Marine Corps and the Royal Navy. While
it is capable of supersonic speeds, it’s perhaps the least-efficient
way to hover.

“Those different aircraft configurations really
speak to different missions, different utility, different customer
sets,” Grant said. “Because of the greater hovering efficiency of X2
Technology, it is first and foremost in our minds a helicopter. It is
not being designed around a turboprop mission, for example, and because
of that greater hovering efficiency, we see there being therefore
greater flexibility in how the aircraft can be used. And frankly that
is the success of helicopters in the aircraft market today, because of
their difference from airplanes. They’re able to hover efficiently for
long periods of time but if you want to go very long distances very
fast you’re going to get on an airplane.”

Then there’s
manoeuvrability. Grant said there is no question Sikorsky’s new machine
will outperform its current and previous platforms in that regard. He
cited the company’s experience with the XH59A Advancing Blade Concept
demonstrator in collaboration with the US Army, Air Force and Navy as
well as the National Aeronautics and Space Administration in the late
1970s. Its coaxial rigid rotors enabled pilots to pull up to 2.5Gs and
it topped out at more than 260 knots. It had excellent manoeuvrability
but Sikorsky was precluded from putting it into production because
other technologies such as FBW simply weren’t developed enough. “The
combination of the two rotors and differential controls between them
can give you some great manoeuvrability,” he said. “Plus, of course,
you have much more power installed in the aircraft for speed and you
can use that power, again, in ways that you wouldn’t in a conventional
helicopter.”

Counter-rotating coaxial rotors in and of
themselves are old hat. Igor Sikorsky’s first helicopter, the S-1,
which he built in Kiev in June 1909, had two-bladed coaxial rotors –
but meagre engine output meant that it couldn’t lift its own weight.
His S-2 a year later used three-bladed rotors and while it could get
off the ground, it couldn’t carry a passenger. It also vibrated
violently because of its wooden frame, so Sikorsky turned to fixed-wing
development and then emigrated to the US. However, a year before the
S-1, Emile Berliner and John Newton Williams experimented with the
concept in the US, Williams designing a coaxial machine powered by two
of Berliner’s rotary engines. It is said to have lifted a gross 277 kg.
Also about that time, a professor and students at Moscow University
were believed to have built a coaxial helicopter and Jacob Christian
Ellehammer of Denmark designed one he evidently flew on several short
hops.

Several others had varying degrees of success with coaxial
rotors but it was the famed Soviet designer N.I. Kamov who really
applied the concept usefully, beginning in 1947. The ensuing decades
saw his eponymous company develop and build an extensive range of civil
and military coaxial helicopters whose compact dimensions and high
thrust-to-weight ratio suited them well for Soviet naval deployment. By
the late 1970s, composites and other technologies came together in the
Ka-50 Black Shark (NATO codename Hokum) attack helicopter flown by the
Red Army.

Once in the US, Sikorsky eventually turned his
attention back to helicopters, but with a conventional configuration.
It wasn’t until the 1990s that the company returned to coaxial
technology with the Cypher unmanned aerial vehicle, which had
counter-rotating rotors within a doughnut-shaped shroud. That
experience, coupled with transmission technology advances on the
Comanche, development of active vibration control, and the advancing
blade concept from the XH-59A convinced the company that the time was
ripe for the next step in rotary aviation. Asked what Canadian markets
he foresaw for X2-equipped aircraft, Grant said Sikorsky had opted to
be “very non-specific” about production aircraft. “We first have to
demonstrate that it works, that all of these technologies coming
together in a platform systemintegrated approach can achieve the goals
we’ve set for ourselves with this technology. We’ll have to see what
evolves.”