My summer of bloodletting found me in northwestern Ontario working with the Ontario Ministry of Natural Resources (OMNR) on fire-suppression duties. Truth to tell, the only bloodletting was courtesy of biting insects. A word to the wise: always carry an adequate supply of repellant. 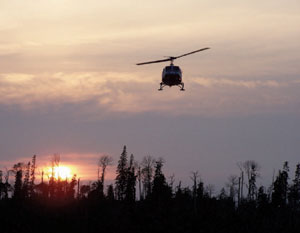 Helicopter pilot trainees often share a level of awareness with senior
company managers – they are out of contact with the realities of
rotary-wing activities in the hinterland. How often have we senior
pilots been faced with our city-based managers who seem to have
forgotten the trials we face on a daily basis in the forests? New
graduates are often overwhelmed by the challenges that face them, and
this contributes to high accident and insurance rates for these
neophytes. Some bugaboos facing pilots in the bush include long hours,
mediocre nutrition, poor sleeping conditions and resulting fatigue. Add
demanding customers, difficulties in maintaining the helicopter and
overwhelming flying conditions and you have a recipe for disaster. How
does one learn to cope with these challenges? Experience. Learning how
to put challenges into perspective is the first objective and this is
best accomplished by placing safety first. Customer gratification and
efficiency become important only after achieving the prime objective.

After
a decade of international operations, my time to serve in Canada’s
nether regions arrived with the beckoning of a friend’s helicopter
company that needed some experienced (tired?) blood to operate its Bell
L3.

My summer of bloodletting found me in northwestern Ontario
working with the Ontario Ministry of Natural Resources (OMNR) on
fire-suppression duties. Truth to tell, the only bloodletting was
courtesy of biting insects. A word to the wise: always carry an
adequate supply of repellant. Some of the typical hardships plaguing
pilots in the field were largely eliminated with the foresight of OMNR
which anticipates pilots’ needs and provides many supplies, such as
repellant.

However, we never know as charter pilots where we
will end up, so it is best to be prepared with our own essentials.
Personally, in addition to my helmet, I wear a Nomex flying suit and
gloves and store a lot of survival equipment in the numerous pockets.
This gear includes sunscreen, waterproof matches, basic toiletries,
local map, knife/tools gadgets, water purification tablets and a couple
of food bars. This is very basic and only meant to supplement the
helicopter’s survival gear – when carried. Once again, the OMNR
passengers also tend to be well H prepared in this respect.

For
my physiology, the major challenge was humidex readings in excess of 40
causing me to ‘sweat blood.’ The humid heat in association with long
days has a cumulative effect that creates fatigue and impairs judgment.
Although the OMNR policy is to share a room in their trailers with
other aircrew, I was lucky enough to always have my own room – albeit
surrounded by thin walls that allowed me to compare the snoring of
other helicopter crew members. Moreover, it was difficult to sleep in
the midsummer heat – even though OMNR provided fans for most of the
rooms. At times when I felt challenged by marginal sleep, it was only
necessary to consider the firefighters who live in the same conditions
while in camp and put in a long day of manual labour until they are
called to a fire – and then their living conditions really tank! While
we aircrews often get the glory in our highprofile operations, it’s
really the suppression crews who accomplished their grueling tasks in
the much higher heat, which is mixed with ashes, dust, dirt and
slough-juice in a recipe that leads to a prickly existence.

Just
as we aircrew have a job to do, so does the client. For him, this
includes minimizing helicopter time (cost) and not suffering
operational setbacks. Translated to helicopterese, this means carrying
the maximum payloads a pilot will tolerate, flying in virtually any
weather to get the job done and minimizing crew efforts in landing pad
preparation. The result can lead to a pilot flying over gross in
marginal visibility into a tiny confined area with minimal power
available. Learning how to say no is a beneficial (and life-saving)
tool. Better still is the pilot who will explain to the client why
certain operations are too risky and these operations will
unnecessarily expose their employees to danger. Obviously, education is
extremely important in something as basic as bush flying.

The
beauty of flying with highly experienced clients such as OMNR is their
dedication to safety learned from heartbraking experiences – they all
knew the ministry pilot who was killed last year. This organization is
well aware of crew duty schedules and rest requirements, nutritional
needs and safety procedures. Before departing on daily operations they
commonly require pilots to complete a weight-and-balance loading form
which ensures the helicopter will not be flown over gross. Wow,
helicopter performance is really enhanced when flying at legal load
limits! Moreover, if a pilot expresses an opinion that a particular
operation is not adequately safe for the existing conditions, the OMNR
employee will quickly accept that decision – without argument. Mind
you, it helps if you, the pilot, can find a better, safer and even more
efficient way to accomplish the client’s mission.

Piston and
light turbine helicopters often operate in the field without a
maintenance engineer. Most helicopters have a list of minor
malfunctions ongoing that do not affect the operational safety of the
machine – navigation light broken, seat cover torn, or perhaps a
toppled artificial horizon. The question is, when are some of the minor
defects considered major unserviceabilities? While your company may
publish an MEL (Minimum Equipment List), it likely won’t include the
GPS or cargo hook or perhaps even the force trim system. A pilot’s
decision to ground an aircraft is not taken lightly by the company
management, due to the loss of revenue. Nonetheless, flight across some
of our terrain (such as the lake-dotted Precambrian Shield of
northwestern Ontario) for a low-time pilot with minimal map reading
experience can be daunting. On one flight from Dryden to Geraldton to
fly dignitaries on a day trip, my GPS went down shortly after takeoff
(due to an intermittent antenna connection). The conditions were
indefinite (high) ceiling with about three miles flight visibility in a
smoky heathaze. I flew a dead reckoning heading and wasn’t sure of my
position until the midpoint of the two-hour flight. GPS may not be on
the MEL, but in some conditions it can be a blessing.

My
survival gear in my flying suit turned out to be a godsend as the day
trip turned into ten days of fire suppression operations instead of a
day trip. Expect the unexpected! Luckily, my engineer hopped aboard a
supply truck and took a bus back to our base and after a couple of days
brought back a supply of personal gear to augment my sparse supplies.

We
were lucky to get accommodation in Geraldton because the big fire flap
had calmed for the moment leaving a few empty rooms available. Although
the OMNR locals knew they were retaining our services, they hadn’t
booked rooms or anticipated our need for meals. Much of this confusion
was the result of a constantly changing game plan. Initially, we were
to fly the VIPs from Dryden to the Geraldton base and thence to the
Ogoki Base Camp to accomplish various administrative tasks. Apparently,
OMNR decided to accomplish the flight from Dryden in its own Eurocopter
B2 – which broke down immediately following our departure, stranding
the VIPs for the time being. So we ferried empty to Geraldton and the
need for our previously planned passengers to fly on a fixed-wing to
catch up caused a lengthier delay for the daily contract. As a result,
some efficient administrator decided to invest our short-term contract
into a fire-suppression standby.

Nonetheless, the forestry types
at Geraldton advised that we would be released the next day back to
Dryden on our contract. I hung on the edge with a severe throat
infection, thinking I could ground myself as soon as we finished in
Geraldton. Finally, after three days, they did release us – to more
suppression duties at the remote Rinker Lake forward suppression camp!
By then the medication had gained ground on the infection and although
I had had enough fire suppression for a supposed VIP trip, I knew my
luck was about to change …

It turned out that Rinker Lake was
indeed in the middle of nowhere; however, some of its amenities were
world class. Steve, a senior firefighter, with the help of various
suppression crews assembled a large lounging facility with a
first-class sauna alongside the lake’s sandy beach. Although our duty
required us to be on standby from approximately 10 am to 9 pm in a
gazebo near the helicopters, I always found time to get in a swim and
sauna after duty. It was a long day with breakfast beginning at 6 am,
but there was an additional attraction there too. Rick, the cook,
(whatever you do, don’t call him a cook to his face) is a gourmet chef
and his bull cook is also well qualified. My first meal was a Thai
supper that was as good as any food I had during a lengthy training
stint in Thailand and my last meal a week later was filet mignon for
lunch – all normal fare in this exotic environment. Newbies heading for
the field shouldn’t anticipate these ancillary benefits to bush
operations, but occasionally there are surprises that can drain the
strain.

When my replacement arrived, I presented him with a
written briefing of all of the salient points he needed to know about
the aircraft’s serviceability, staff names and positions, camp meal
hours and other pertinent information, and hopped into the company
truck for the drive back to the Dryden base.

As this was being
written in the fall of 2005, the contract continued with extensions – a
tribute to the effort expended through the summer by company personnel
for the company and the ministry. Next issue, we will visit the Ogoki
Forward Fire Suppression Base and battle Nipigon Fire 20, a
conflagration that decimated more than 14,000 hectares of commercial
timber and almost incinerated the crews who initially fought her.