Features
The Frontier of Electric Aviation 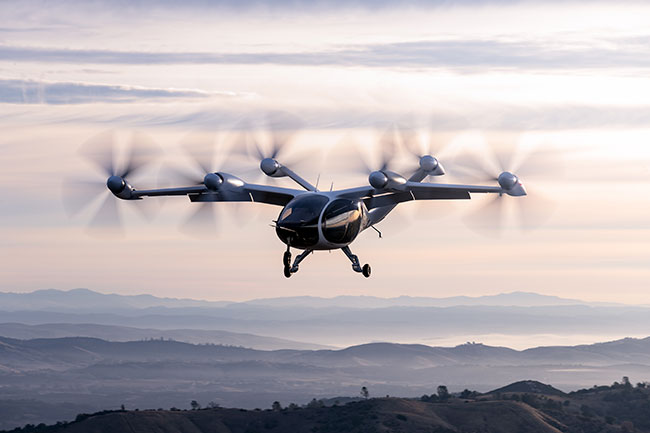 Joby Aviation expects its aircraft to start commercial service in 2024, transporting a pilot and four passengers at speeds of up to 200 mph. (Photos: Joby Aviation)

Joby Aviation on July 27, at its Electric Flight Base near Big Sur, completed a 154.6-mile test flight of its full-size – four revenue-earning seats plus one pilot – prototype aircraft on a single charge. After Chief Test Pilot Justin Paines spent one hour and 17 minutes in the air, making 11 laps of a predefined circuit, the California company’s founder and CEO, JoeBen Bevirt, noted the flight’s significance based on what many believed to be impossible with today’s battery technology. He described it as a first step toward making convenient, emissions-free air travel between places like San Francisco and Lake Tahoe (156 straight-line miles), Houston and Austin (146 miles), or Los Angeles and San Diego (111 miles) an everyday reality.

Joby’s prototype aircraft uses commercially available lithium-ion batteries, adapted for aerospace use. The July 27 flight speaks to the efficiency and design of Joby’s prototype, which has quietly been in the making for more than a decade (now with more than 1,000 test flights completed). With the aircraft’s recent public unveiling in the rugged landscape of the Santa Lucia Mountains, Joby now looks best positioned to lead the highly anticipated transportation revolution of all-electric air taxi services. With a FAA Type Certification goal set for 2023, Joby expects its aircraft to start commercial passenger service in 2024.

In December 2020, Joby, even if it was already well-known within the aviation sector, made its advanced commercialization ambitions clear by reaching an agreement to buy Uber’s Elevate operation, which since 2016 had laid out much of the groundwork for an aerial ride-share market. In August 2021, Joby then became the first U.S.-based eVTOL company listed on the NYSE, through a Special Purpose Acquisition Company merger (SPAC) with Reinvent Technology Partners, led by LinkedIn Co-founder Reid Hoffman. The SPAC transaction, according to Reinvent, valued Joby at a US$4.5 billion, with proceeds raised, plus cash on the balance sheet as of March 31, 2021 equaling approximately US$1.6 billion. The proceeds are expected to fund Joby through its initial commercial operations.

The addition of Uber Elevate integrates Joby’s pioneering aircraft development with a go-to-market product infrastructure, in terms of determining how an all-electric aerial ridesharing service can be rolled out to consumers. Beyond the aerostructures and propulsion intrigue of amazing ever more eVTOL aircraft, there are many infrastructure and operational pieces to fit together for true success.

Much of this needed platform vision falls on the shoulders of Eric Allison, Head of Product for Joby and one of the eVTOL sector’s pioneering explorers, who has known Bevirt since before 2010.

Allison joined Joby in January 2021 after becoming the lead of Uber Elevate in March 2018. Prior to joining Elevate, he spent more than eight years with Zee.Aero, including three years as CEO, directing the company’s engineering operation in its aim to develop an autonomous eVTOL called Cora. (Zee.areo ultimately became Wisk, which is now backed by Boeing.) At Uber Elevate, however, Allison focused on customer-facing strategies, instead of aircraft development, which is now serving Joby’s complete vision.

“Joby is building a vertically integrated business,” says Allison. “We envision providing trips for people and we’re also designing and manufacturing the aircraft. We’re going to operate them, as well.” He continues to explain how Joby’s strategy focuses on how a consumer will interact with this new type of transportation – “It is what I think about every day.”

At the start of 2021, Joby began to release specifications and images of its six-bladed, full-size prototype, being developed with tilting fans to reach top speeds of up to 200 mph. In addition to innovative aircraft design, distributed electric propulsion allows for redundancy for safety and propeller flexibility (realized through dozens of iterations) for strong noise abatement. Joby’s resulting prototype can currently takeoff and hover with a decibel measurement – at around 55 decibels – about one thousand times less than that a helicopter (90 decibels) and avoid the high-pitch whine associated with drones. Flight of the Joby prototype, with its forward-titling rotors, is even quieter than its hover – key to success in the Urban Air Mobility market. 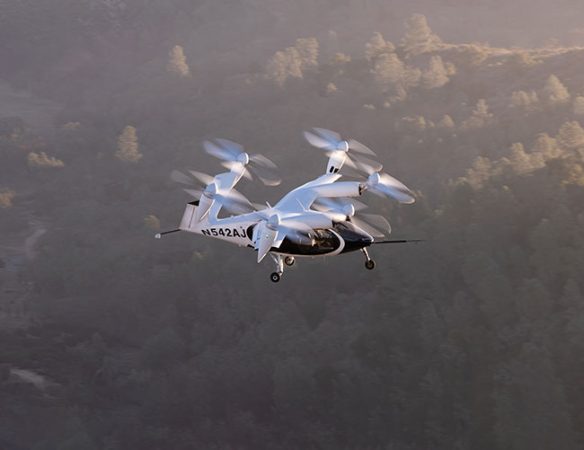 ropellers of the six forward-tilting rotor fans have been through more than 25 iterations with Joby focused on the critical issue of environmental acoustics for Urban Air Mobility. (Photos: Joby Aviation)

Allison emphasizes Joby has been working on determining its best form of distributed electric propulsion aircraft since being founded in 2009, refining the optimization of the technology and overall shape the aircraft, and is now “leaning into” its commercialization.

“The mission we are going after is relatively short range, call it five to 150 miles, because we have a pretty flexible aircraft that can efficiently serve a relatively wide range of trip links, but in an urban or semi-urban environment,” says Allison. This is where Joby’s new aircraft design is supported by Uber Elevate’s own historic software development to connect aerial ride sharing with ground transportation to revolutionize how people move around in urban environments.

The Elevate team put this concept to the test in 2019 with the launch of Uber Copter, described as the world’s first seamless multimodal mobility product. With a single push of a button, Uber Copter in the background built an entire trip itinerary, allowing people in New York City to be picked up by an Uber driver, taken to a heliport for a helicopter ride across the East River, and then picked up by another car to reach their final destination.

“Fundamentally, the vision that we’ve laid out is one of an end-to-end experience. We will have both our own entry points [with] a Joby app, that will enable you to request the trip, and through our partner Uber we will be able to provide first- and last-mile transportation with a car; and then we will be able to get you to the optimal skyport, match you into the next available flight or the best available flight to get you to your final destination with significant time savings on the overall trip. That’s the North Star vision of what we’re building.”

For Allison, this North Star is the culmination of years of propulsion research and development, which began with building large radio-controlled model airplanes as an undergrad. Then at Stanford, where in 2000 he began specializing in Aeronautics and Astronautics, Allison worked with a professor on tethered micro air vehicles (quadrotors). Allison’s Ph.D. thesis was on Ultrasonic Propulsion, a system to wirelessly propel a capsule around a patient’s stomach to do remote endoscopy. Captivated by flying machines since he was a child, Allison is now just months away from helping to commercialize a new future for aviation.

“We’re working on a Type Certification of the aircraft and that’s a very critical gate that we must get through. In parallel, we’re working on building up our skilled production capability that will then go along with our production certificate,” says Allison. “We have already filed for our initial Part 135 Certificate that will be the foundation of our operation, and we are building up the software platform… Those are the three pillars of what we are building over the next few years as we mature the technology, finish the Type Certification process and bring the vehicle into service.” | H