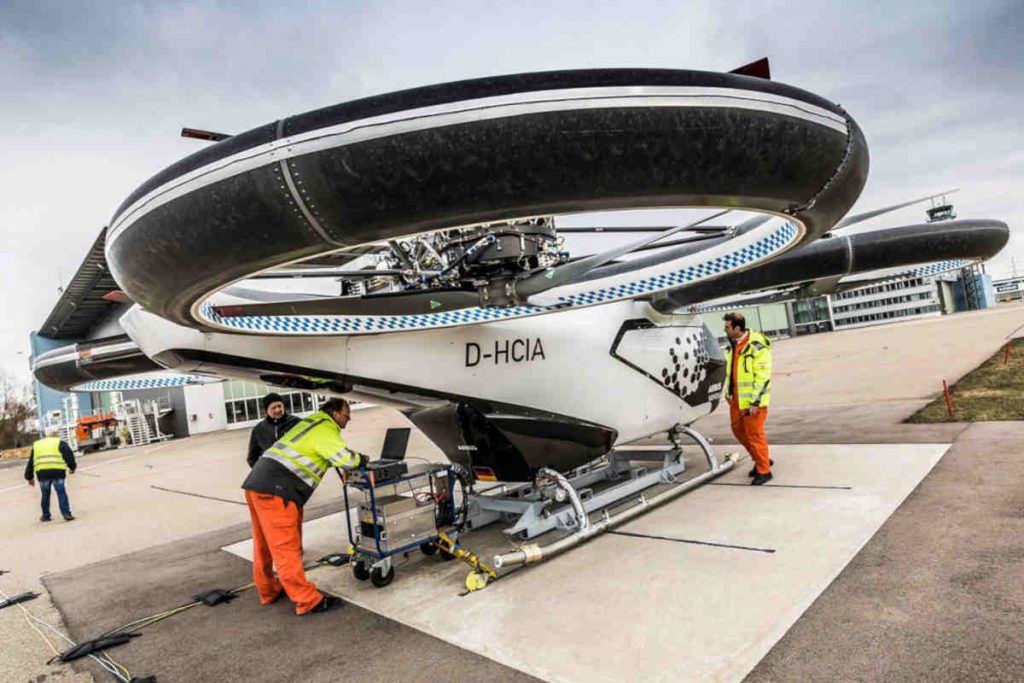 The transition to electric propulsion is fully underway on a global scale, evidenced by the growing number of hybrid/electric cars and electric drones in the streets and in the skies. But how does electric propulsion – which uses electrical energy supplied by a battery pack or hydrogen fuel cell – compare to traditional, fossil fuel-powered thermal propulsion?

Depending on the machine, combustion engines can appear very different. In large planes and helicopters, the combustion engine takes the form of a turbine. In the turbine, fuel burns in an oxygen-rich environment, creating hot air and high pressure in a confined chamber, and employing that energy to power the aircraft.

In electric-powered vehicles, the motor is composed of a rotor and a stator. With pulses of electricity from a power electronics device, the stator produces a magnetic field around the rotor which rotates and then turns a vehicle’s drive train, rotor shaft, etc. The energy is supplied by a hydrogen fuel cell or a battery pack, which is generally powered by lithium-ion cells. These are similar to the batteries in a laptop, but multiplied by several thousand.

The limits of thermal-propulsion technology
Combustion engines are ideal for long-range travel because fossil fuels produce a lot of power and energy per kilogram of fuel (power and energy density, respectively). In other words, they enable long-range missions with a limited mass of fuel. And fossil fuel tanks are quite lightweight, considering the fuel mass they contain.

The main drawback is the emissions (NOx, CO2, particles, etc.) they produce. In addition, a lot of fuel is consumed (or wasted) in heat. In fact, three-quarters to two-thirds of fuel energy transforms into heat or is lost via the exhaust. Advances are being made to counter these negatives, like drawing off some of the lost energy from the hot exhaust (to warm up the air before combustion), but these improvements will eventually reach a plateau.

Electric energy presents challenges
The primary challenge of electric energy is that it cannot be stored efficiently (from the perspective of both mass and volume), at least not with today’s technology. In the simplest terms, a large quantity of batteries is required to equal the performance of fuel. This means that the battery in an electric car can represent approximately a third of its empty weight.

Compared to ground vehicles, the mass and volume needed to store energy are more critical on aircraft and rotorcraft because they may directly impact payload and/or performance. And unlike a car’s fuel tank, a battery does not become lighter during the trip – representing another disadvantage.

Mass and volume storage also are problematic for hydrogen fuel cells. This is because the chemical hydrogen must either be stored at high pressure, as in a gas state, or as saturated liquid hydrogen – which needs to be kept at around -253°C and requires large and heavily insulated tanks.

Another option is to combine the best of both worlds. This is known as hybrid-electric propulsion, which uses a combination of conventional internal combustion engine with an electric-propulsion system. 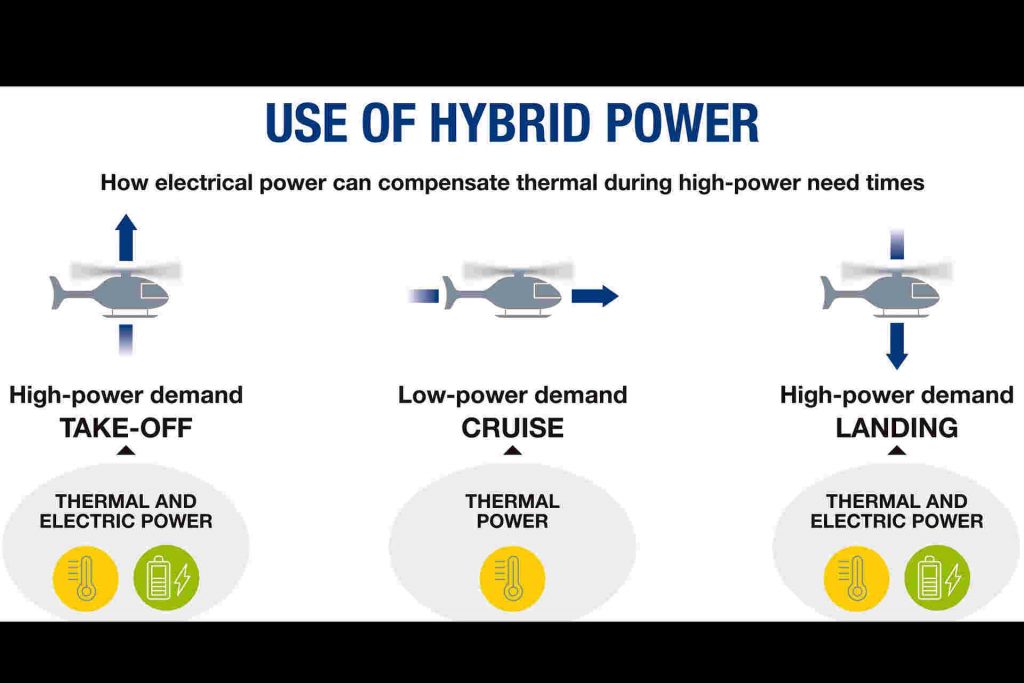 A comparison of combustion engines and electric engines. (Illustration: Airbus) 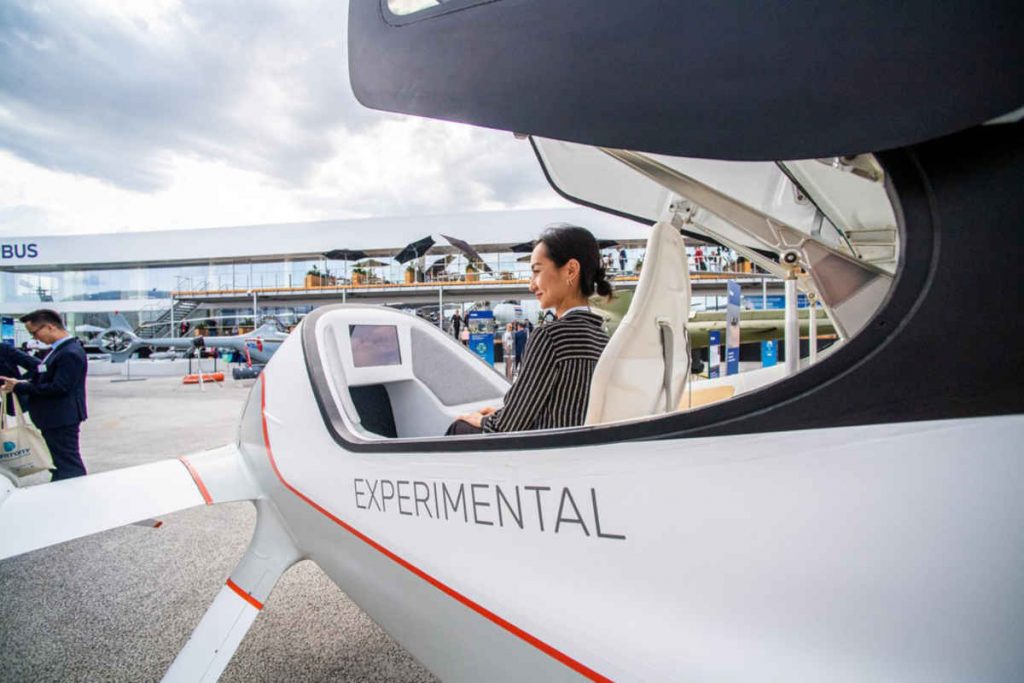 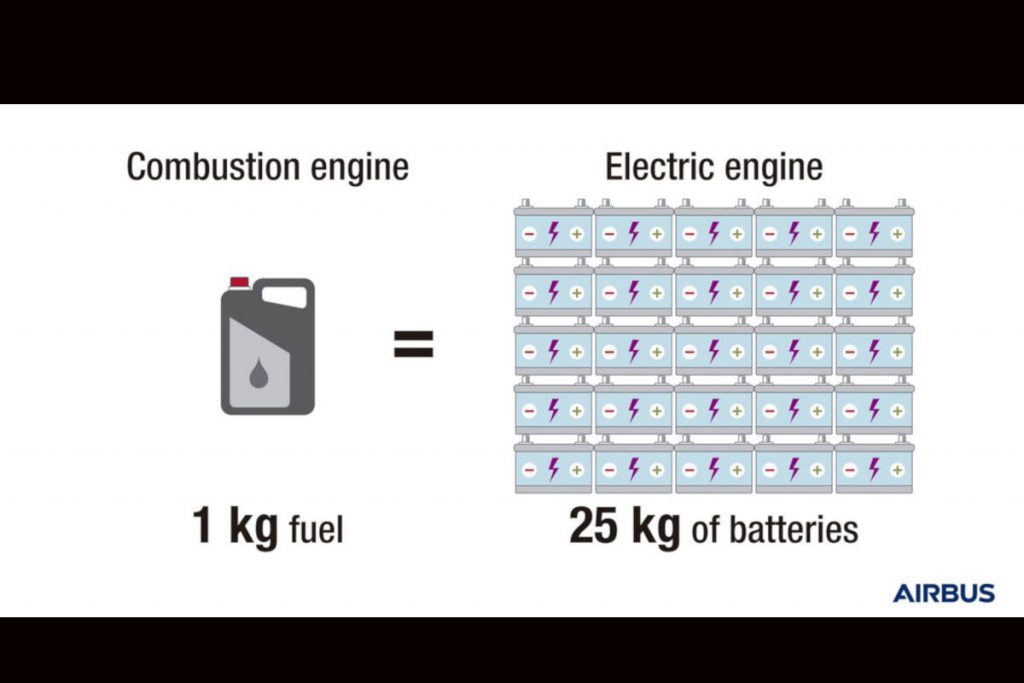 The current usable energy density of rechargeable batteries is approximately 120Wh/kg, compared to fossil fuel’s 12,000Wh/kg. In other words, the average efficiency of a motor and thermal engine can be equated to: 1 kg of fuel equals 25 to 30 kg of batteries. (Illustration: Airbus) 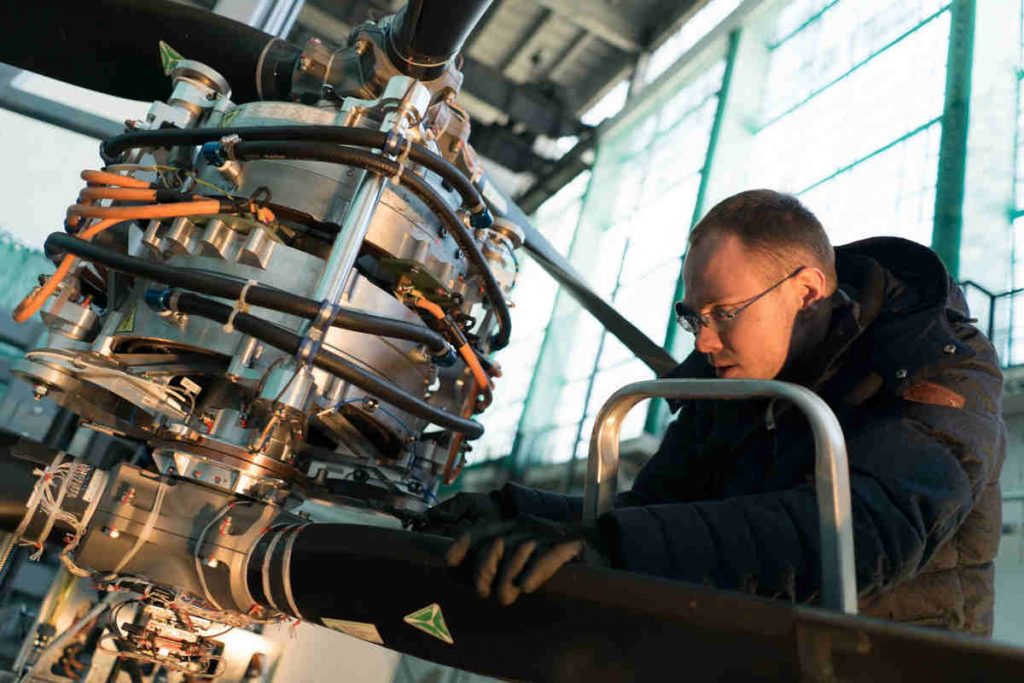 “Hybridization enables us to optimize,” says Luca Cossetti, Innovative Power Solutions at Airbus Helicopters, who is a part of a team developing a hybrid-propulsion solution for air vehicles. “You could use the thermal engine in certain phases of flight, thereby optimizing its efficiency and consumption for that specific situation, and compensate with electrical power when the power demand is higher (such as during take-off and landing for a rotorcraft).”

The future is bright
So what might propulsion look like in future aircraft? For commercial airplanes and helicopters, combustion engines powered by cleaner, more sustainable fuels is already possible: Airbus has delivered wide-body A350 XWB aircraft that use a blend of sustainable jet fuel. In parallel, hybrid-electric propulsion systems are showing great potential for use in mid-sized airplanes and helicopters.

Consider Airbus’ E-Fan X. In this complex hybrid-electric aircraft demonstrator, one of the four jet engines will be replaced by an electric motor. This power is roughly the equivalent to that of 10 medium-sized cars. The electric propulsion unit is powered by a generator-fuelled battery and during descent, the engine blades work like small windmills to generate power and recharge the battery.

The promise of fully electric propulsion
Such a scenario is already in development for urban transport, where the journey from an airport to a city centre is short, and the payload is comparable to the needs of a taxi. Today, more than 150 urban air mobility (UAM) vehicles – steered by start-ups, automotive manufacturers, established aerospace companies, and others – are in various stages of development worldwide.

These future urban air vehicles are designed to be fully-electric and zero-emission. Airbus is addressing this market by developing the Vahana and CityAirbus, both of which are advancing electric vertical take-off and landing (eVTOL) flight ideally suited for intra-city transport.

No matter the route taken, it is clear that the methods and materials to produce batteries, cells and hydrogen will be of paramount importance in the years to come.