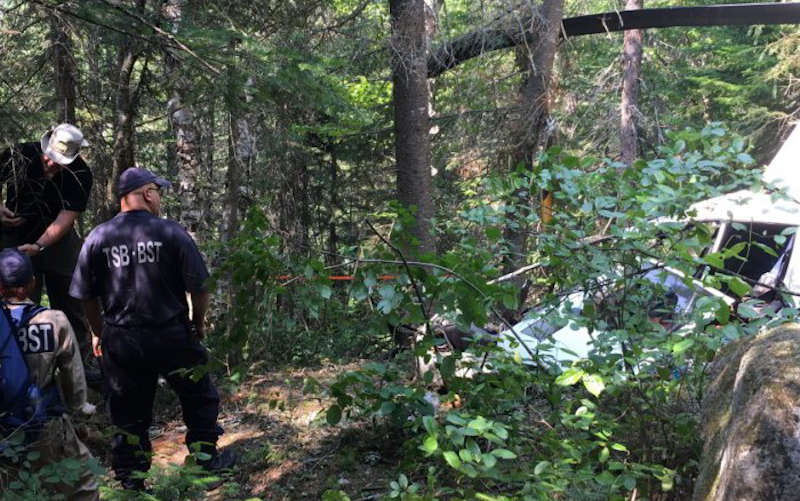 Transportation Safety Board of Canada on March 31 released its investigation report (A19Q0109) on a fatal impact with the ground near Lac Valtrie in the Rouge-Matawin Wildlife Reserve, Quebec.

TSB explains, that on July 10 2019, a privately registered Robinson R44 helicopter was conducting a day visual flight rules flight from Lac de la Bidière, Quebec, to Saint-Sophie, Quebec, with one pilot and one passenger on board. The aircraft never reached its destination and it was reported missing the following day to the Joint Rescue Coordination Centre in Trenton, Ontario, which began the search. No emergency locator transmitter (ELT) signal was detected.

TSB explains the Canadian Armed Forces launched an air search with the assistance of the Sûreté du Québec, the Canadian Coast Guard, and volunteer air search and rescue organizations in Quebec and Ontario. A ground and water search was also undertaken. The aircraft was found on July 25, 14 days after it was reported missing, in a remote, densely wooded area near Lac Valtrie, Quebec.

The aircraft was located using historical data from the occupants’ cellphones, explains TSB, which helped to perform several triangulation calculations until a precise point was identified 193 m from the wreckage. The aircraft was destroyed and there was no fire following the impact with the ground. The occupants were found dead.

During the examination of the wreckage, TSB explains one of the blades was found to have multiple adhesive failures, which resulted in the breakup of certain sections of the joint between the lower skin and the spar, causing humidity to infiltrate below the skin, weakening the adhesive bond joint over time.

TSB states its investigation determined that a sudden increase in these failures likely contributed to significantly reducing the stiffness of the blade, causing severe vibrations. The rotational speed of the main rotor then fell too low, explains TSB, preventing the aircraft from remaining in flight. This was followed by a vertical drop and impact with the ground.

TSB notes its investigation also found that no flight plan or flight itinerary had been filed. In such situations, TSB explains there is a risk that a search will not be initiated within a reasonable timeframe, especially if no ELT signal is detected, which reduces the occupants’ chances of survival and deprives search and rescue teams of important information needed for the search.

Following the accident, the TSB issued an air safety advisory requesting that Orolia, the manufacturer of Kannad ELTs, and Transport Canada (TC) revise ELT periodic inspection procedures so that a failure of the switch locking system can be detected and corrected in the future.

In its response to TSB’s advisory, Orolia indicated, among other things, that a warning was added in the documents containing switch operating instructions to clarify the instructions and avoid inappropriate manoeuvres that could result in breakage of the switch locking latches. TC published a civil aviation safety alert on ELT inspections and focuses on directing attention to switches on ELTs.