The acquisition of police helicopters by Canada’s larger cities has been lacklustre over the past several years, but the four municipalities that did invest in rotary-wing police aircraft have had outstanding success. 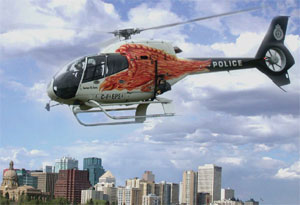 The acquisition of police helicopters by Canada’s larger cities has been
lacklustre over the past several years, but the four municipalities
that did invest in rotary-wing police aircraft have had outstanding
success.

Canada’s cities generally cover a large landmass for
their populations, creating the need for a means of rapid accessibility
and ongoing surveillance. Yet most still rely on the constable in a
patrol car driving surface roads with nothing more than eyesight and a
cop’s instincts.

Three decades of the RCMP’s Air Services
Division have proven the value of lawenforcement helicopters. In
operation since 1937 with fixed-wing aircraft, the division purchased
its first helicopters in 1971; in recent years, the RCMP has acquired
the Eurocopter AS 350B3. It has excellent power-to-weight ratios and is
larger than the RCMP’s older Bell 206L4s. It has four 206L4s and five
AS350B3s in service, with the Bells slowly being phased out by the
larger, more powerful Eurocopters. Located across Canada, the aircraft
have many roles in support of RCMP operations including personnel
transportation, surveillance and search-and-rescue.

The Ontario
and Quebec Provincial Police also operate helicopters in support of
their ground-based units. Before any city owned or operated a
helicopter, these organizations provided ad hoc support to local
municipalities. But their mandate is to serve outlying and remote
areas, and the aircraft often were not available for immediate urban
support such as in high-speed pursuits or major crimes.

Flying
surveillance patrols is the mandate of municipal helicopters. The local
aircraft are tasked to provide a set of aerial eyes with the capability
of instantly responding to a situation anywhere in their jurisdiction.
Pursuits, robberies and break-ins require the timely response of an
airborne unit in the immediate vicinity.

Calgary (population 1
million), was the first city with its own police helicopter, obtained
through public donations after the tragic death of a city police
officer during a high-speed pursuit. After more than 10,000 hours of
flying, HAWC1 (an MD520) will soon be joined by HAWC2. The recent
lottery for HAWC2 was a sellout and the Calgary Police Service is in
the process of deciding what type of helicopter to purchase.

Edmonton
(population 950,000) was the second Western Canadian city to add a
helicopter to its crime-fighting arsenal. Edmonton obtained its
helicopter the same way as Calgary, with an aggressive fund-raising
campaign, and on August 5, 2001, AIR-1 made its public debut. The
Edmonton Police Service operates a Eurocopter EC-120B, equipped with
typical police equipment such as FLIR, video camera, a
30-millioncandlepower searchlight, video recording equipment and
tactical police radios. After two years in operation, there have been
few noise complaints and the program is well received by Edmontonians.

In more populous Eastern Canada, only two regions have equipped their police services with helicopters.

Durham
Municipal Region (population 550,000) lies immediately east of the City
of Toronto and within the Greater Toronto Area. It encompasses
approximately 1,000 square miles (2,590 square kilometres), an area
characterized by a variety of landscapes and communities. The Durham
Regional Police Service’s Bell 206B3, ‘Air1’, has been operating since
1999. Based at Oshawa Airport, Air1 is often the first police unit on
the scene at incidents in rural areas of the municipality. It provides
a vital tool in searches for missing persons. The helicopter is also
gaining a reputation for finding marijuana grow operations hidden among
the fields of tall corn. Unlike out west, the Durham municipality
purchased the helicopter new once the value of its presence was
determined. Utilization of the helicopter averages 1,000 hours per
year. Noise complaints average one per month, mainly from citizens
querying the presence of the aircraft in their area. Durham Police Air
Services Unit is very proactive in marketing the service, with daily
incident reports being posted on its Web site (www.drps.ca).

The
Municipal Region of York (population 875,000), covers 1,756 square
kilometres (678 square miles) from Lake Simcoe in the north to the
northern edge of Toronto. It borders Simcoe County and Peel Region in
the west and Durham Region in the east.

Before committing to a
helicopter, the York Regional Police participated in a trial program in
1995 and again in 1999 to evaluate the effectiveness of a full-time
dedicated police helicopter. When the trial program proved the worth of
a helicopter as a patrol unit, ‘Air 2’ went into service in June 2000.
Originally, York used a donated Enstrom 480. Despite its size, it
served as an effective platform for the aircrew to prove the value of
air support. As the program evolved, so did the aircraft. In October
2002, the York Regional Police traded in the Enstrom and purchased a
new Eurocopter EC120B. The new aircraft added increased speed as well
as payload, thereby allowing Air 2 to accomplish more missions in a
timelier fashion.

Despite the obvious value of a helicopter,
these are the only four municipalities in Canada to add this proven
force-multiplier to their law enforcement agencies.

Toronto
(population 4.7 million), Canada’s largest city with a land area of
1,650 square kilometres (637 square miles) has no plans for a police
helicopter. The politicians have turned down their chief of police, who
feels that the acquisition of such a tool would be of value, and there
is no public discussion on the issue. Instead, when it requires the use
of a helicopter for searches or other tasks, Toronto ‘borrows’ the
services of Durham or York. Vancouver, with a population of over 2
million and only two bridges across its harbour and a few more to the
south, has no official interest in a police helicopter despite the
forthcoming Winter Olympics in 2010.

Other municipalities across
Canada have no public plans for adding a police helicopter to their
law-enforcement arsenal, relying on the RCMP and the two provincial air
units for support.

From a marketing point of view, this is
frustrating to the manufacturers who continually sell new aircraft into
the world market for urban areas much smaller than those in Canada.
Eurocopter is actively promoting the EC120 as a light, quiet,
open-conceptcabin helicopter with an extended ‘loiter’ time valuable
for city patrols. Agusta has recently sold two joint-venture Agusta
Bell AB139s to STARS in Calgary for EMS. Bell continues to market the
206B3, but like other manufacturers it has had little success in
cracking this very tough Canadian market.