“If a man is in need of rescue, an airplane can come in and throw flowers on him and that’s just about all. But a direct-lift aircraft could come in and save his life.”

Some 65 years ago, Igor Sikorsky spoke those words to a reporter who had asked what such a fragile (and complex) contraption would be good for. But even Sikorsky could scarcely have imagined how prophetic his words would be, or how much good the descendants of the VS-300 would be capable of providing. 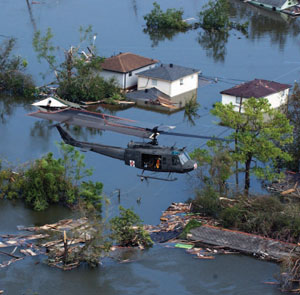 “If a man is in need of rescue, an airplane can come in and throw
flowers on him and that’s just about all. But a direct-lift aircraft
could come in and save his life.”

Some
65 years ago, Igor Sikorsky spoke those words to a reporter who had
asked what such a fragile (and complex) contraption would be good for.
But even Sikorsky could scarcely have imagined how prophetic his words
would be, or how much good the descendants of the VS-300 would be
capable of providing.

Over the years the helicopter has become
(at least in the eyes of the public) a ubiquitous if occasionally
somewhat annoying presence in their lives. Who among them hasn’t seen
newscasts of military helicopters, or a high-speed freeway chase
photographed from above, or the occasional acts of heroism on the parts
of helicopter crews who risk all to save a few. Other than the
thankfully rare latter occasions, however, few if any saw the
helicopter as an absolutely vital necessity. Until Katrina hit the US
Gulf coast.

With a force, in the words of a US Weather Service
spokesman, “equivalent to the energy released by a 10-megaton nuclear
weapon going off every 20 minutes,” Katrina’s devastation was nearly
beyond comprehension. The area from Plaquemines Parish, adjacent to New
Orleans, to Pascagoula, Mississippi was simply flattened, with intact
buildings along the coast being the exception rather than the rule. New
Orleans, while escaping a direct hit from the hurricane, was
nevertheless devastated by a series of events that began with an
estimated 20-foot wall of water, driven southward over Lake
Pontchartrain by the winds. One of the most telling indications of the
wave’s size and power was the complete destruction of the FBOs and
other facilities at New Orleans Lakefront Airport.

The Million
Air FBO, which was located at water’s edge on the west side of the
field, was hit broadside by the wave off the lake. The hangar wall
collapsed and a 10,000-gallon fuel truck, an MD-600N helicopter and
more than a dozen cars and vans stored within the hangar (for
safekeeping) were then pushed through the maintenance area, the offices
and the waiting area en masse, completely destroying the facility. The
wave went on to flood the infamous Ninth Ward to a level of nearly
eight feet in less than 15 minutes. Some have since speculated that the
backwash from this wave was a causative factor in the eventual collapse
of several levees, but the point is moot; the levees failed and the
city was flooded.

When the skies cleared, the largest air rescue
operation in history began, spearheaded by nearby US Coast Guard HH- 60
and -65 helicopters. Eventually, USCG helicopter crews would rescue,
mostly by hoist, nearly 6,500 residents from their flooded homes, more
than double the total number of airborne rescues performed by New
Orleans-based USCG crews in the previous 30-year history of the unit.

That
number would be matched by an amazing fleet of military, public-use and
civilian helicopters from throughout the US that rapidly joined USCG
assets, bringing the total number of helicopters in the New Orleans
area alone to over 400. Virtually every western turbine helicopter type
in existence was on the scene. In many ways, the helicopter replaced
destroyed infrastructures. For example, for the first few days after
the storm, communications between assets-in-place (i.e., police and
fire departments as well as municipal governments) and those who would
be able to help was non-existent. Radio towers were damaged or
destroyed, offices and station houses met the same fate, generators in
those buildings not destroyed or flooded quickly ran out of fuel, and
lastly, batteries powering individual radios simply died. Small
helicopters then became the equivalent of carrier pigeons, bringing
word (as well as radios, batteries, meals and satellite phones) to and
from remote areas. Because the roads within most of the affected areas
were either flooded or completely blocked (in one case by an entire
four-story apartment building that had been blown off its foundation
onto a nearby highway), helicopters were often the only means of
transportation into and out of many areas.

HELICOPTERS magazine
was invited to accompany US Customs and Border Protection (CBP) and
Border Patrol (BP) personnel on operations within the disaster area, to
witness first-hand the scope of the damage and to document the critical
role aviation in general and helicopters in particular played in
alleviating the human suffering.

CBP and BP air assets were
based at the CBP Section Headquarters at Hammond Regional Airport
northwest of New Orleans, along with two Texas National Guard units
also deployed there. Between them, CBP and BP had six UH-60 BlackHawks,
six AEC AS-350B3 AStars and five Bell UH-1H helicopters at Hammond. As
none of the aircraft were equipped with hoists, all the rescues the
units performed were either on open ground or, in several instances,
‘single-skid’ landings on rooftops. Washington, DCbased CBP public
affairs officer Barry Morrissey estimates that over the course of their
operations, CBP and BP crews rescued between 200 and 300 individuals.

Pilots
for the aircraft were deployed from CBP and BP bases as far away as
Washington State, with most of the Black Hawk crews coming from either
Tucson or Miami. Their missions ranged from rescues to nighttime
surveillance to supply flights, bringing food and water to residents
who wished to remain at their homes, to inserting BP ‘BORTAC’ tactical
teams whose missions were to clear areas that had been taken over by
criminal elements. Two of the latter missions resulted in prolonged
firefights with the criminals.

Flying with CBP and BP crews was
at times frightening, particularly at night. Despite night vision
goggles, picking out some of the other aircraft was dicey at best,
particularly the OH-58 Kiowa Warriors operated by the 82nd Airborne
Division, also on the lookout for members of the criminal gangs who
were wreaking havoc in some neighborhoods. With their extensive FLIR
capabilities, the OH-58s worked down low, and at very high speeds; the
-58s would ‘pop up’ out of the ground clutter nearby.

During the
day, the traffic was far more hectic and there was no way to monitor
and control it from the CBP radomeequipped P-3 providing fixed- wing
ATC services orbiting above. Low-level traffic avoidance was on a
strictly ‘see-and-prayyou’ll- be-seen’ basis but, despite uncounted
extremely close calls, there were no midair collisions. The only
incidents involved a Helinet AEC Super Puma that rolled over following
a ground resonance event and a National Guard UH-60 that clipped the
tail rotor of another parked Black Hawk while taxiing at night.

There
were some, politicians and journalists for the most part, who
complained about what they perceived as the slow pace of the response
to the disaster choosing, in their ignorance, to blame race as among
the reasons things took so long. In fact, the initial response was
virtually instantaneous, and the time it took to have all the aviation
assets in place was as quick as it could possibly have been, and was in
fact accomplished sooner than had ever been done before. A few of the
helicopters that saw service in the area had to come nearly 2,000
miles; that’s a long way to go on short notice at 120 knots. All of the
pilots, maintenance technicians and support staffs did an incredible
job, and they did it as quickly as it could be done.

Katrina has
shown that the helicopter industry has matured far beyond a simple
convenience, and it must now be seen for what it is: a critical
component of a national infrastructure that can go places and do things
that no other machine can do, but must be done nevertheless.