Features Procedures Safety & Training
Build It and They Will Come

Combine a passion for flying, an uncanny sense for marketing and a love of people, and you’ve just described Ruedi Hafen. Ruedi is quite possibly Canada’s most famous and beloved heli-tour operator, pilot and heli-entrepreneur. 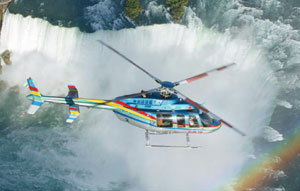 Combine a passion for flying, an uncanny sense for marketing and a love
of people, and you’ve just described Ruedi Hafen. Ruedi is quite
possibly Canada’s most famous and beloved heli-tour operator, pilot and
heli-entrepreneur.

The
principal owner and operator of Niagara Helicopters out of Niagara
Falls, Ontario, Ruedi has built an international reputation for safety,
efficiency, generosity and hospitality.

With a fleet of five
Bell 407s, Ruedi and company fly year-round tours, delighting and
exciting more than 100,000 tourists annually.

Trained as an
architect in his native Switzerland, Ruedi arrived in Canada in 1980
with his helicopter licence and a need to fly as many hours as
possible. His goal was to bank 1,000 hours and return to Switzerland to
work in search and rescue.

In 1981, Ruedi finished his Canadian
pilot training at Pan-Air, just outside Ottawa in Metcalfe, Ontario. As
fate would have it, Pan-air also owned a flight facility in Niagara
Falls. Upon completion of his training at Pan-Air, Ruedi was hired by
the company as a pilot. He began his Canadian helicopter career at the
Niagara Falls flight facility. Ruedi never returned to work as a pilot
in Switzerland and has been flying out of the Niagara helipad ever
since.

In the early years, Ruedi recognized the untapped
potential of the facility. Niagara Falls is one of the premier tourist
destinations in the world, but the facility itself was unkempt and
unprofitable.

Two dilapidated hangars, a beat-up ticket shed and
a gravel landing pad would have discouraged all but the most intrepid
of tourists. “The place was a complete mess,” says Ruedi. “Everything
was so rundown that people were concerned about flying with us.”

In
late 1984, Ruedi teamed up with businessman Juerg Sommer and marketing
expert Eve Mctaggart for a plan to purchase the facility. By March 1985
the three partners, along with some shareholders, had purchased the
operation.

They gave it back its old name (Niagara Helicopters Ltd.), cleaned up the property and started an aggressive marketing campaign.

Things
started to improve, so much so that in 1989, the story of Niagara
Helicopters was included in a book called “The Financial Post, Turning
it Around: How ten Canadian organizations changed their fortunes,”
published by Random House.

Business continued to flourish until
2001; then it stopped. “The events of 9/11 almost killed us,” says
Ruedi. “We did normal business for about two weeks following the attack
and then nothing. October 2001 was a washout, 2002 was terrible and
2003 was a total writeoff.”

“In fact,” says Ruedi, “in 2003,
business was half of what it had been pre-9/11. I could have managed
with two-and-a-half helicopters instead of five but in 2003, you
couldn’t even sell a helicopter, there were so many on the market.”

Ruedi
knew that things had to change. He scaled back a $5-million building
and revitalization project to just under $2 million. Then he added what
has turned out to be one of his most popular revenue generators,
Niagara Photo Services, a digital photo lab run by Anton Fercher.

The
photo service is a paradigm of efficiency. As passengers are loaded
onto the aircraft, one of the company photographers takes group shots
in front of the helicopter. The pilot then lifts off, and hovers above
the pad as the photographer takes photos of both sides and the front of
the aircraft with passengers posing and waving from inside. Using
wireless technology, the data is sent to the lab where the photos are
touched up and printed on 10" x 15" stock. Total time from initial shot
to finished print is less than four and a half minutes. Tourists
returning from their tour of the Falls are given the opportunity to
purchase copies of their adventure. An impressive 70% of Ruedi’s
customers purchase a print. Profits from the photo service make up a
significant portion of overall revenue.

Add to the photo
service, a gift shop and a snack bar boasting one of the best
hamburgers in town, and you’ve got a lucrative cluster of profit
centres leveraged by the main helicopter operation. “The helicopter
business is a break-even business,” says Ruedi. “You need these other
things to be profitable.”

Ruedi is in the tourist business and
he knows it. His location inside city limits is enviable and Ruedi is a
proud member of the community. It wasn’t always this way. In the early
years, residents of the area complained about the noise of Ruedi’s
operation. It was a big problem that Ruedi had to solve.

The
solution? Ruedi equipped his aircraft with FADEC systems. FADEC
controls the aircraft’s power plant, providing it with the correct
fuel, air and ignition ratios required for optimum performance using
minimum fuel. The system allows for an RPM reduction on the main rotor.
A reduction of RPMs from 100% to 90% is enough to reduce exterior noise
by four to six decibels. At 200 feet, Ruedi and his pilots reduce their
RPM level to 90%, and except for landing, fly the entire tour at 90%.

In
addition to the tourist segment of the business, Ruedi also does some
aerial photography. In fact, he has been monitoring the progress of a
construction site across the road from his facilities for Ripley
Entertainment (a Jim Pattison company).

The project is the
construction of Canada’s first Great Wolf Lodge, a $200- million family
resort set on 25 acres of property directly across from Ruedi’s Niagara
Helicopters. It is currently the largest family resort construction
project in Canada.

The lodge, which boasts 406 family suites,
has a 94,000-square-foot indoor entertainment area with waterpark, a
7,000-square-foot arcade, and a 5,000- square-foot gift emporium. The
indoor waterpark will be one of the largest in North America.

Ruedi
beams when he talks about the new mega-project. “Even if only three
percent of the guests took a helicopter ride, it would double my
business,” he says. The lodge is scheduled to open in the spring of
2006.

Today, Ruedi’s original partners have gone in other
directions and Ruedi controls the company. Ruedi has paid his dues but
continues to work tirelessly towards even bigger and better goals. The
new lodge is just one of the many megaprojects currently being
undertaken in the Niagara Peninsula. The region is, as a whole, intent
on becoming an even bigger tourist destination than it has already
been. All this activity means that an already wellestablished and
well-run heli-tour operation has a bright future.