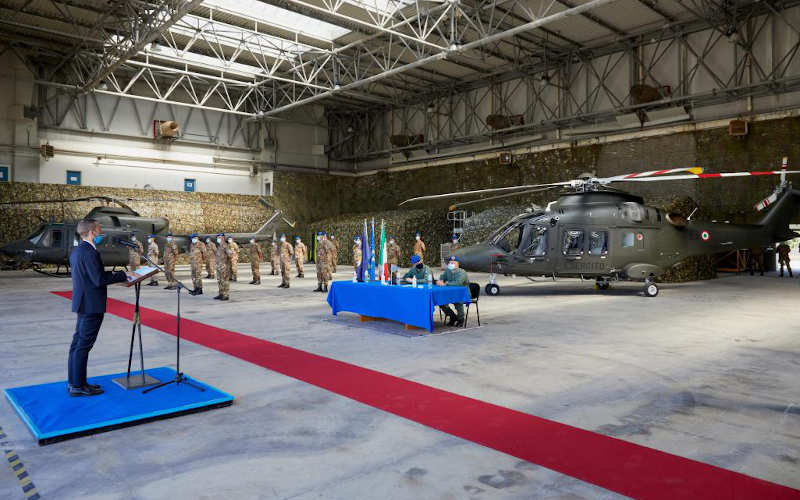 Leonardo on July 10 announced the delivery of the first of two AW169 basic training twin engine helicopters to the Italian Army during an official ceremony held at the 2nd Rgt. AVES ‘Sirio’ based in Lamezia Terme. The second aircraft is expected to be handed over in the next few months.

Leonardo explains the introduction of this new generation training helicopter (designated UH-169B) allows the Italian Army to prepare its crews for the future operational transition to its all-new advanced multirole Light Utility Helicopter (LUH) program developed on the AW169 dual-use baseline and aimed at a longer-term fleet modernization and rationalization plan.

The two AW169 trainers, which will enable the Italian Army to familiarise with the platform’s basic characteristics during the development of the new LUH, are being supplied with logistical support and a pilot/maintenance technician training package.

Leonardo states the LUH program is aimed at progressively replacing ageing models including the A109, AB206, AB205, AB212 and AB412. The program also benefits from a more efficient supply chain based on a one-single-platform approach. The introduction of the AW169 LUH, specifically developed for the Italian Army leveraging on the AW169M military helicopter baseline, also provides what Leonardo describes as unique logistical, operational and technical, certification and training commonalities and synergies across the growing AW169 fleets of Government operators in Italy.

The overall AW169 LUH program is based on what Leonardo describes as an advanced multirole configuration provided with dedicated flight/mission equipment including, among others, skids landing gear and an advanced C4 command, control and communications system to grant full interoperability with the other assets in the NATO environment.

“It gives us great pleasure to celebrate with the Italian Army the delivery of its first AW169 in basic training configuration as an essential enabler ahead of the implementation of the new, broader LUH program,” said Gian Piero Cutillo, managing director, Leonardo Helicopters. “The LUH will definitely represent the start of a new era in terms of capabilities, technical support, mission flexibility and interoperability in the light weight segment. The new program takes advantage of many decades of a successful partnership and continued exchange of information, intended to fully understand the changing operational needs and how to address them through the possibilities offered by new technologies.”