For the pilot simply transiting high terrain, it may appear he is above any challenges. 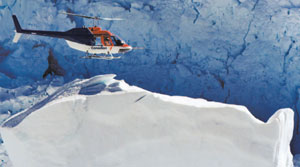 Tired of the often mundane flying tasks in lowland areas? Ever consider
applying to a company with flying contracts in the mountains? Flights
into mountainous terrain are splendid opportunities to sample nature’s
beauty but they can also threaten the untrained pilot. Fixed-wing
pilots transiting the ‘rocks’ seldom face the challenges confronting
their rotary-wing brethren. There are many effects that can challenge
any helicopter’s capabilities and its pilot’s skills during operations
in vertical terrain. We will now consider these potential limitations
to apprise ‘flatlanders’ of the challenges facing them.

For
the pilot simply transiting high terrain, it may appear he is above any
challenges. However, a quick look at the Vne limitations chart will
show that most helicopters are significantly restricted on their
indicated cruising speed with increasing height. For instance, a Bell
206B at gross weight with a Vne of 140 mph at 3,000 feet will be
limited to 84 mph at 10,000 feet. So, for the many pilots accustomed to
cruising at 115 mph, it will require a considerable collective
reduction to stay within the limitations. Add a strong headwind and one
can see that range would be significantly limited at the lower cruise
speed – perhaps challenging fuel reserves. Some of the older and/or
heavier helicopters produce interesting aerobatics when their Vne is
exceeded as they often pitch up and roll with the onset of a retreating
blade stall.

Canada’s mountainous terrain is awe-inspiring with
its rugged beauty; however, those huge trees and massive crags are
totally unforgiving as landing areas – especially for emergency
landings. Suitable spots are few and far between. Realistically, little
can be done about this in terms of connecting landing areas along a
route as the resulting flight would be too circuitous. Mountain pilots
generally accept the fact that a power train failure will result in a
close encounter with trees, creeks or rocks – or all three. So,
mountain flying requires an attitude adjustment and an acceptance of
these risks.

High altitudes have other physiological affects as
well. As oxygen’s partial pressure is reduced with height, human
efficiency drops rapidly. Our brains and eyes especially require high
oxygen concentrations. As their efficiency drops, so goes our judgement
and our ability to assess the challenging situations encountered in the
mountains. If you are a smoker, the stress increases for an already
challenged respiratory system. Moreover, the negative effects of
residual alcohol double around 7,500 feet. All of the above can also
contribute to increased levels of fatigue. Clearly, one wants to be fit
in all ways to stand a reasonable chance in this high, rugged terrain.

Virtually
all aspects of the helicopter’s systems suffer performance penalties as
well. Helicopters without ‘de-rated’ engines quickly lose their lifting
capabilities. For instance, a Bell 205’s useful load starts to plunge
by 2,500 feet in the limitations chart. Get the Huey to the top of a
mountain and it can lift no more than an Alouette III or Astar. What
client wants to pay a 205’s tariff when a light turbine would suffice
at altitude?

Why the loss in lift? It’s multi-faceted. Turbine
engines are like normally aspirated piston powerplants that lose power
quickly with altitude due to the less dense air. Most helicopters
feature ‘freeturbine’ installations that allow the engine (gas
producer) to accelerate as the rotor’s demands increase to help offset
the losses. These turbines turn at higher rpms with increasing altitude
until they ‘top out’, i.e., reach maximum fuel flow. From this point
on, any increase in pitch will cause rotor droop. This phenomenon is
uncommom in the lowlands but, de rigueur in the mountains. Moreover,
since the rotor blades are less effective in the less dense air, the
overall lifting efficiency of the helicopter is further degraded.
Additionally, antitorque authority is reduced, adding further
challenges to a pilot’s workload. While there are techniques to
minimize these efficiency loses, mountain pilots quickly learn to
reduce loads and airspeeds with decreasing air density.

All
pilots should be aware that increasing ambient temperatures increase
density altitude – further challenging a helicopter’s performance. The
‘hot and high’ combination found during summer mountain ops can result
in DA’s exceeding 10,000 feet – even though a pilot may be working a
valley elevation below 5,000 feet. (Temperatures above 27ºC at this
altitude can do this.)

Because mountains stand proud to
prevailing winds, there is often a raging battle between mountain tops,
ridges and passes with cloud assaults. A cloud base of 3,000 feet at a
valley airport does not guarantee that the pass out of the valley will
be ‘open’ and your proposed landing site in the mountains may be
obscured. The significance escalates if that pad is your refueling
location!

Landing areas in the mountains tend to provide their
own selection of challenges. Due to environmentalist pressure, the pads
cut out of the forest tend to be very small and surrounded by high
trees. As a result, pilots are faced with high-density altitudes, steep
approaches, minimal power reserves and situations that often require
enough power to hover out of ground effect to ensure the log or gravel
pad is ‘landable.’ Many rudimentary log or gravel pads can be dangerous
to rest on due to their unstable nature and pilots need to exercise
extreme caution when considering a customer’s observations about the
suitability of a landing site. Due to pad size limitations, pilots
often deplane their passengers on narrow ridge prominences in a semi
hover by holding the helicopter steady while their passengers and cargo
are unloaded. Gusty winds or unplanned C of G changes with passenger
movement while loading or unloading can further challenge during these
precise hovering tests.

Winds and their resulting currents
caused by mountains are our best friends and worst enemies. Updrafts
provide additional lift – often exceeding the power loss we suffer with
altitude. I have seen occasions when I have been unable to land on a
mountain ridge as the helicopter was in a climb whilst the collective
was bottomed in a state of autorotation! (A Sikorsky S-58T at 13,000
pounds gross weight!)

Conversely, downdrafts of 1,000-2,000 fpm
will exceed our best climb rates and the turbulence within can easily
cause your bone dome and cockpit ceiling to merge – forcibly! Seasoned
mountain pilots learn to ‘read’ the wind conditions so they can use the
lift to their advantage and avoid the sink. But it takes a lot of time
to be a good ‘reader’. In fact, rocky barriers create their own
windflow. Sometimes it is updrafts on sunny rock faces and downdrafts
in shady areas and it is even possible to meet hurricane-force winds
cascading down glacial valleys late in the evening. These katabatic
winds occur when air is cooled over the ice and, becoming heavier,
begins to sink down the slopes building up inertia to speeds that have
been recorded above 100 mph.

Small pads with tall tree obstacles
force pilots to make steeper approaches and these often lead to vortex
ring state conditions with potential catastrophic results. Good
mountain pilots learn to make as flat an approach as conditions will
allow while keeping the disk loaded throughout the approach.

Prairie
pilots will also find navigating in the mountains a conundrum – just as
mountain pilots often experience difficulty navigating over the
grasslands. Because mountains and roads are not aligned with reference
to true north, map reading and compass work become more important since
mountains are very similar in appearance. As a prairietrained pilot, I
was ‘temporarily unsure of my position’ many times during my early
mountain operations and became quite adept at ‘lost orientation’
procedures.

A further difficulty converting to flying in the
rocks is determining the horizon’s location. In the flatlands, given
good visibility, the horizon is obvious. In mountainous terrain,
various visual cues prove misleading and this is exacerbated in falling
rain leading pilots to fly too low when approaching a ridge.

Since
the effects of decreasing pressure, density altitude, rotorcraft
dynamics and human physiology can be cumulative, it is easy to
understand why mountain flying can be exceedingly challenging – and
perhaps scary. But it doesn’t have to be. There are a number of
companies and courses available to teach neophytes how to conquer the
obstacles – those that are vertical and those that haunt our grey
matter. The rewards, financial and spiritual, make learning the skills
and overcoming the challenges more than worthwhile.