Products
On the Fast Track at Silverline Helicopters

“The simulator gives students extra value for their money. Already we find that students who have been shopping around and know the costs stay to train,” says Ian Rogers, Silverline’s president. 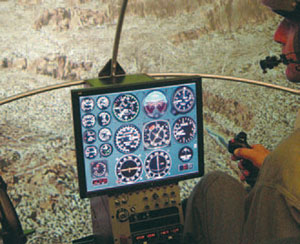 Charter and student pilot prospects are better informed and more
cost-conscious than ever, forcing helicopter operators to continually
seek ways to be competitive and profitable. Silverline Helicopters Inc.
of Holland Landing, Ontario thinks its newish FLYIT professional
helicopter simulator will give it an edge.

“The
simulator gives students extra value for their money. Already we find
that students who have been shopping around and know the costs stay to
train,” says Ian Rogers, Silverline’s president.

“You notice a
definite benefit to the students,” adds Andri Harasym, chief pilot.
“After experiencing the simulator, they have an understanding of the
fundamentals. They grasp things quicker when they get in the
helicopter. Students can hover after only three hours in the simulator.
That’s about two hours less than usual.”

Rogers isn’t concerned
that the simulator will reduce helicopter utilization. Rather, it
increases the school’s training capacity and reduces the exposure to
accidents.

The first in Canada, the California made simulator
can simulate the Bell 206, Eurocopter AStar, Hughes 269, 300C and 500,
Robinson R22, R44 and Schweizer 300. TRK Helicopters of Langley, BC was
the second Canadian firm to buy the simulator.

Silverline’s
simulator is housed in an 18-foot trailer that can be towed to customer
sites for recurrent training or pilot proficiency checks. It has been
taken to private schools to spark interest in helicopter flying
careers. The trailer plugs into a wall socket or can be powered by a
generator. A permanent installation is a more costly alternative.

The
simulator rents for $100 per hour (formerly $60 VFR and $100 IFR),
compared to $400 for a typical 2-seat helicopter. (Prices for the
simulator at American schools average US$105 per hour for VFR and
US$230 for IFR, according to the manufacturer.) Even at Silverline’s
increased VFR rate, the simulator may reduce the cost of a private
pilot’s licence by $1,000. Transport Canada allows five hours FTD or
simulator time toward both a pilot’s licence and an instrument rating.

Private
pilot students are usually either 18-year olds or successful business
people. They earn their licences in 50 to 55 hours, while Transport
Canada’s minimum is 45 hours. Commercial pilot candidates are 70% of
trainees. They’re ready for their flight tests in 75-80 hours, well
before Transport Canada’s minimum of 100 hours. Money saved by using
the simulator is apt to be used to increase employability by training
in slinging, bucketing, long-lining, hover deplaning, advanced pads and
confined areas. Peter Curry, chief flying instructor, said: “It will
also save money for high-time fixed-wing pilots, who sometimes find it
hard to break old habits.”

I found the
two-seat cockpit realistic, with its contoured seats, full-size stick
and collective, central console and simulated canopy bow. Generic
knobs, switches and King avionics are on a central console but the
21-inch monitor displays full-size instruments for the selected
helicopter type. The out-of-the-window view continues below your feet,
as in a real helicopter.

Upon start, the stick vibrates
noticeably and the noise level varies with the power setting. The
difference in cruise and climb performance between types is most
noticeable. However, control pressures are the same for each aircraft
type. Changes in trim can be corrected with the electric trim.

In
flight, the 93" by 78" screen gives an impressive sense of movement.
However, a very low flight over an idling Cessna 172 didn’t cause the
light plane to rock. Like all simulators, close-up detail is l lacking.

The
software is that home favourite, Microsoft Flight Simulator 2002,
running on a Pentium 3 computer. Here, Flight Simulator is not a toy
but a highly suitable component of an effective device. Some 22,000
worldwide airports and navigation aids are in the database, including
such intriguing spots as 108 Mile Airport, BC and Arthur East, Ontario.
The operator can enter scenery that mimics his own base.

An
instructor can follow the flight from beside the student or from a
monitor equipped seat in the rear of the trailer. From either location,
he or she can fail systems, instruments and radios, change wind,
temperature, dew point, barometric pressure, turbulence, visibility
(down to 1/16 of a mile), precipitation, ceiling and even cloud layers.
An entire flight can be played back, or controls can be frozen in order
to review manoeuvres.

Pendulum action, dynamic rollover, vortex
ring state, wind effect on hovering, transitional lift and hovering in
and out of ground effect can be demonstrated.

Almost everyone
calls the FLYIT a simulator. Transport Canada (and the US Federal
Aviation Administration) insist that simulators move. Stationary
versions are called ‘flight training devices’. The FLYIT is rated as an
FTD level 2, which classes it with those desktop machines whose dinky
screens are crowded with both an instrument panel and the sky. Five
minutes in the FLYIT will convince anyone that it is superior to some
$500,000 FTDs, making it a genuine breakthrough.

Silverline
Helicopters spent about US$100,000 on its simulator and is gathering
data from ab initio students to quantify the savings. The FLYIT was
bought for the company’s training program, but Silverline also does
charters, maintenance and, as the Schweizer dealer for Ontario and
Manitoba, sales. Established in 1999, the company operates two
Schweizer 300Cs, a Eurocopter EC120 and a Bell 206B. Its staff of eight
operates from a private (although open to the public) airfield that is
a 45-minute drive north of Toronto.

To give potential students a
feel for piloting, Silverline offers an introductory course on the
effects of the controls and, unusually, autorotation and hovering.
Three hours in a Schweizer and at least as much ground instruction
costs $1,000, a discount of more than $200. “Many students receive the
course as a gift; 70% of those who previously knew the cost of
commercial training ($40,000 to $50,000) sign up after taking the
course,” Rogers says.