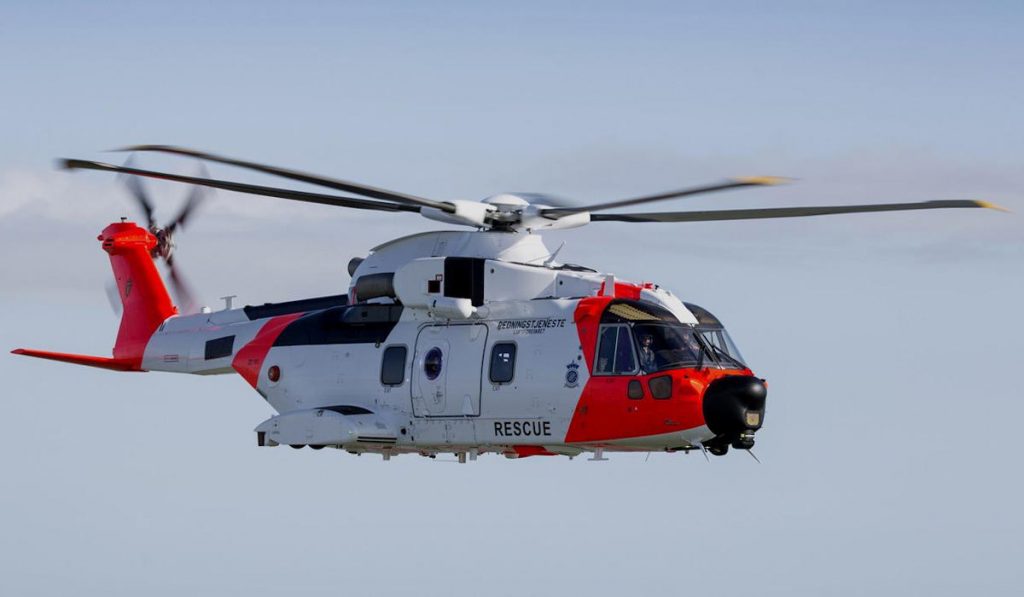 The next generation AW101 helicopter is supported by a full anti-ice system, critical to climates like Norway and Canada. (Photo: Leonardo)

Starting from September 1, 2020, the first six helicopters that have been so far delivered by Leonardo to Norway officially became operational from the Sola base. In 2021, it is expected that the Ørland and Banak bases will become operational. The remaining aircraft are being assembled, integrated and tested by Leonardo at its site in Yeovil, UK.

In the first month of service, Leonardo explains the SAR Queen aircraft have undertaken missions in challenging weather conditions and inhospitable environments, flying for about 80 hours. The majority of the missions were SAR operations (including a night mountain rescue) and an emergency transportation.

Leonardo explains the new AW101s are equipped with greater digital autonomy and more power to cover longer distances and larger areas. A proven Sea King operator, Norway is gradually replacing its SAR fleet with the next-generation AW101s. The AW101 helicopter is the result of a collaboration between the UK and Italy on the future replacement of the UK Royal Navy’s and Italian Navy’s Sea King fleets.

The helicopter is supported by a full anti-ice system, which Leonardo describes as a fundamental feature in a climate like Norway’s, as well as Canada’s, which will receive an AW101 variant through the Cormorant Mid-Life Upgrade Project. The anti-ice system works through sensors that measure how much ice is on the blades of the helicopter enabling the continuity of a mission.

Leonardo also points to the ship’s electronic anti-collision system. The device, based on laser technology and installed on the main rotor, covers the helicopter at 360 degrees and can detect multiple obstacles (such as rock walls, trees, electric pylons, infrastructures, walls or metal parts of oil platforms), when the aircraft is in a normal or static flight position, providing the pilot with visual and acoustic signs of the distance (with an approximation of centimetres) — and therefore the risk level.

The helicopter’s Osprey radar is developed with an Active Electronically Scanned Array antenna. The radar provides 360 degrees coverage thanks to three fixed electronically scanning antennas, one on the front and two on the side of the helicopter. In comparison with classic mechanical antennas, Leonardo explains electronic versions offer faster scanning of the environment. Moreover, the fixed antenna, when compared to the mechanical one, significantly reduces maintenance costs and is lighter.

The Norwegian AW101 also features a Mobile Phone Detection and Location System, which enables the geo-location of missing people in extreme environments, if the mobile phone is turned on. The equipment detects the waves emitted by the mobile phone and that works like a transponder.

The helicopter’s cockpit is equipped with systems of synthetic representation of the real world with five large displays where pilots view 3D images, populated from pre-loaded maps installed on the on-board computer. During flight, Leonardo explains obstacles will be reproduced even in low light and reduced visibility conditions, significantly increasing the pilot’s awareness of the operational situation.

Leonardo explains management of the technological apparatus is twofold: on one side there is the pilot and co-pilot, on the other side is a mission console developed by Leonardo, which is used by research activity operators. These are the main collectors of the information coming from the devices; and the pilots have the same information on the cockpit display. This allows for faster and more effective communication between crew members to increase safety and heighten the success rate of the mission.

Leonardo points to ship stability as another key feature that makes the AW101 ideal for SAR missions throughout Norway, managed by the onboard computer, to remain stable during rough seas and strong wind conditions, thanks to its automatic stability corrections, which means it does not require any pilot intervention on flight and attitude controls. Thanks to this feature, Leonardo explains the AW101 can carry out a recovery mission while keeping the aircraft stationary during the delicate phase of the winching — which is the hooking of the person and transporting on board.

Another strength of the AW101, according to Leonardo, is the capacity: its dimensions (27 m3 ) allow the carrying of over 50 standing passengers, which makes it very effective in natural disasters or major accidents involving people .

As part of this partnership an infrastructure for AW101 crews was opened in Norway (and also in other countries), where pilots are trained on flight simulators, co-developed by Leonardo. The simulators can duplicate both flight and the mission experience for pilots and rescue operators. The simulator is certified to Level D standards, which, Leonardo explains, means that one hour of flight time on the device is considered the equivalent of a one hour real helicopter flight, because the hydraulic and mechanical tools faithfully duplicate the helicopter’s reactions and the physical sensations transmitted to the crew in a multiple operational context.