Sikorsky Aircraft Corporation can be expected to emulate the crews of one of its most high-profile products, the combat-tested UH-60 Black Hawk, striking hard and fast in the corporate dogfight to provide Canada with 28 new shipborne helicopters. 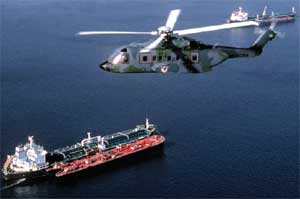 Sikorsky Aircraft Corporation can be expected to emulate the crews of
one of its most high-profile products, the combat-tested UH-60 Black
Hawk, striking hard and fast in the corporate dogfight to provide
Canada with 28 new shipborne helicopters.

An
August visit to Sikorsky's sprawling headquarters in Connecticut left a
strong impression that the subsidiary of United Technologies
Corporation – which also includes Pratt & Whitney – is approaching
the Maritime Helicopter Project (MHP) with supreme confidence in the
H-92 that it will pit against the European NH90 and the Anglo-Italian
EH101.

Confidence and vision are hardly new concepts to
Sikorsky, as a visit to founder Igor Sikorsky's office showed. Frozen
in time since his death in 1972 at the age of 83, it is a shrine of
memorabilia and other evidence of the Kiev-born engineer-pilot's
determination and commitment to rotary flight. His first attempt was a
rubberband powered model he built at the age of 12, inspired by the
drawings of Leonardo Da Vinci!

While the company, founded in
1923 as the Sikorsky Aero Engineering Corporation, continues to pay
homage to its roots and his legacy, which includes dominance of the
global military helicopter market, it has its sights fixed on the
future.

In a sense, Sikorsky has come full circle with the H-92.
It is the latest evolution of the Hawk platform, which was a military
airframe from the outset. Sikorsky developed the S-92 and had it
certified as a civil aircraft before moving to market the H-92 military
variant.

"All the crashworthiness designs, the military-spec
compliance requirements of the H- 60 went into the S-92," said Dave
Powell, regional executive for North America. This includes
unprecedented compliance with the latest regulatory requirements for
flaw tolerance. "Seeing is believing when you see deliberate defects in
components, a 5/1000ths scratch or 40/1000ths gouge, yet we still have
complete integrity of the flight dynamic through a full cycle of
inspection. That's second to none."

Powell said this "safety by
design" policy dates to the Black Hawk, which essentially replaced the
Bell UH-1 Iroquois, better known as the Huey. "We wanted to have a
walk-away-from machine in a combat environment." It was then only
logical, given the "very strong interest" of the US Marine Corps’
presidential helicopter unit and the US Air Force and other potential
military customers, to try to tap that market…